The Regional Assembly of Text is a staple for any visit to Vancouver’s Main Street.  Among file cabinets and typewriters, you can hide out from the gloomy weather outside and  poke through its closet mini book library as well as the many notebooks, calendars, wrapping paper and other cheerful ephemera for sale.  I caught Brandy Fedoruk, one half of the Regional Assembly team, one morning to talk about the store and its affairs. 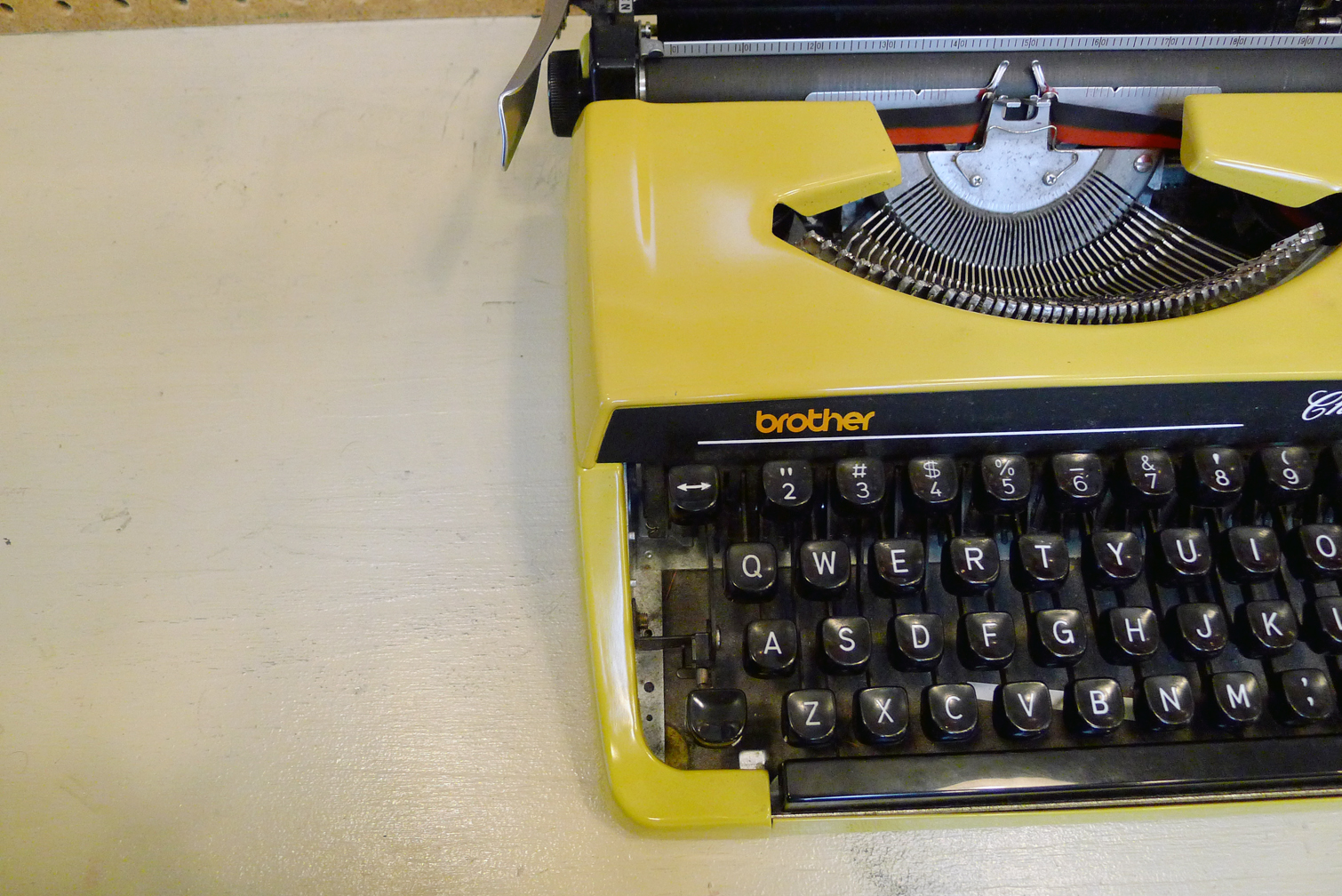 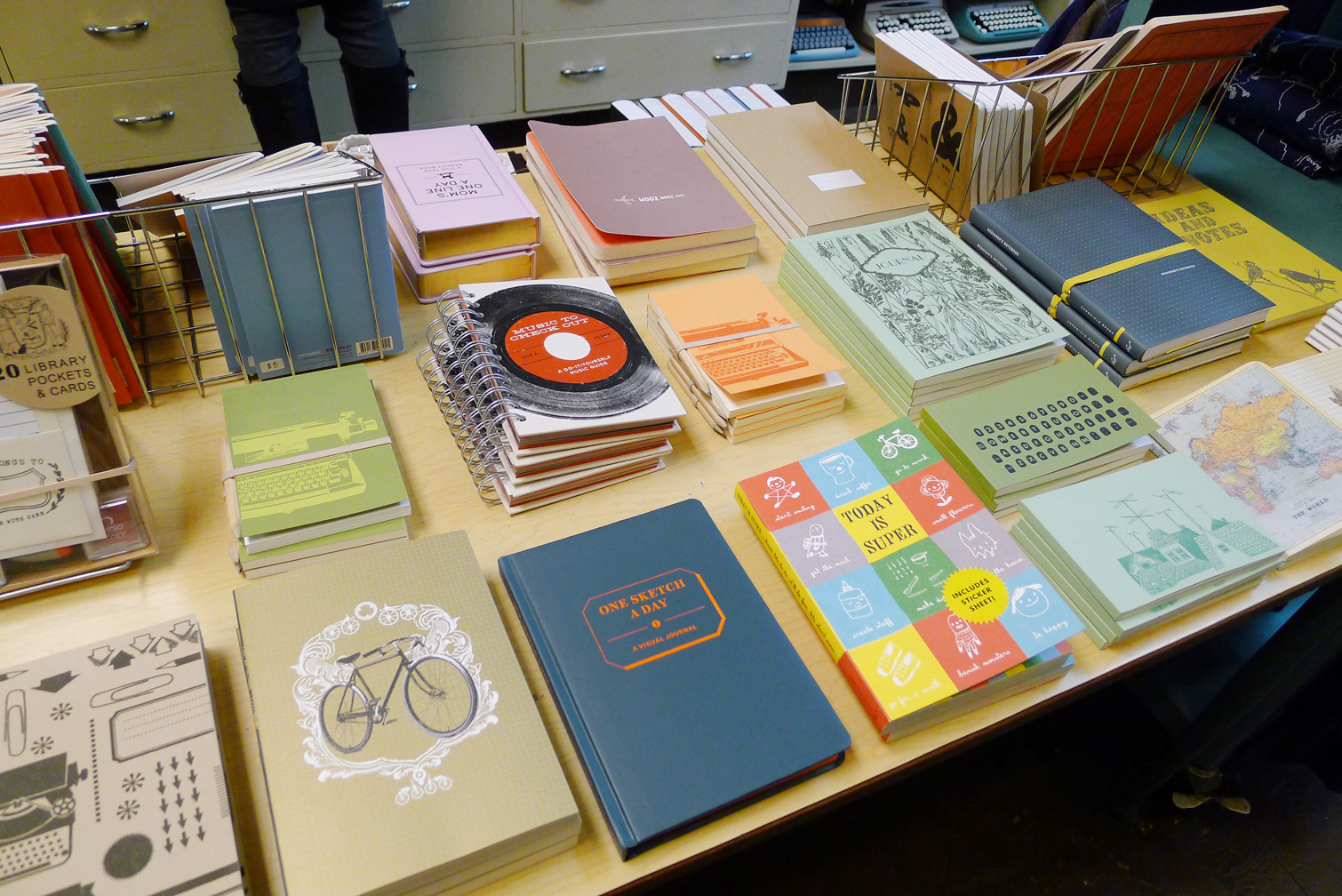 ML:  So you guys met at Emily Carr, how did that develop into the store?

BF:  I think both of us always thought we would work for ourselves.  We spent a couple of years working for other people after graduating, then decided we wanted to have our own space.  Maybe a studio and storefront.  From there we spent another year writing a business plan and doing research, building products.

ML:  Is the studio just in the back?

BF:   Yup.  We make most of the things we sell and design in the back. 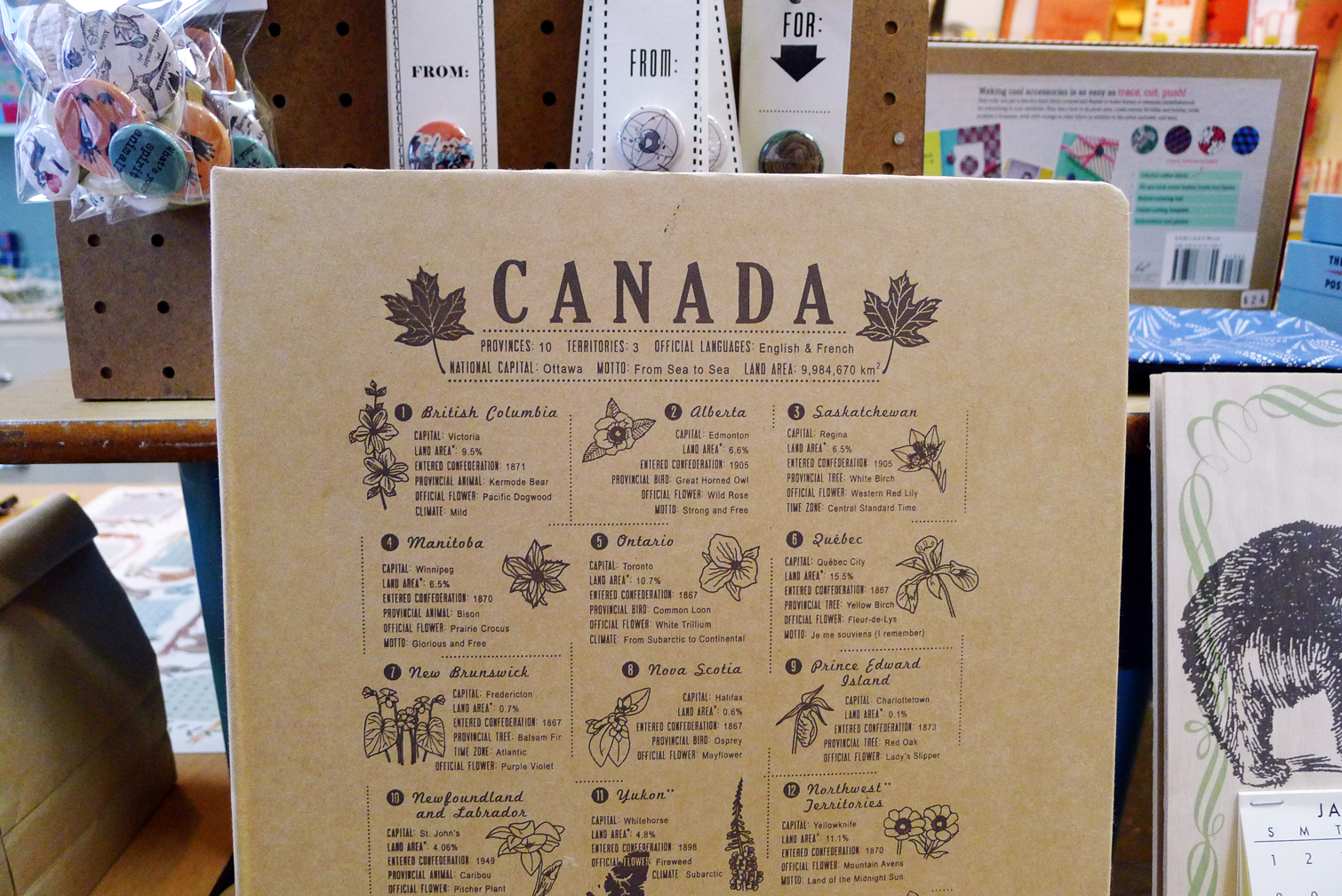 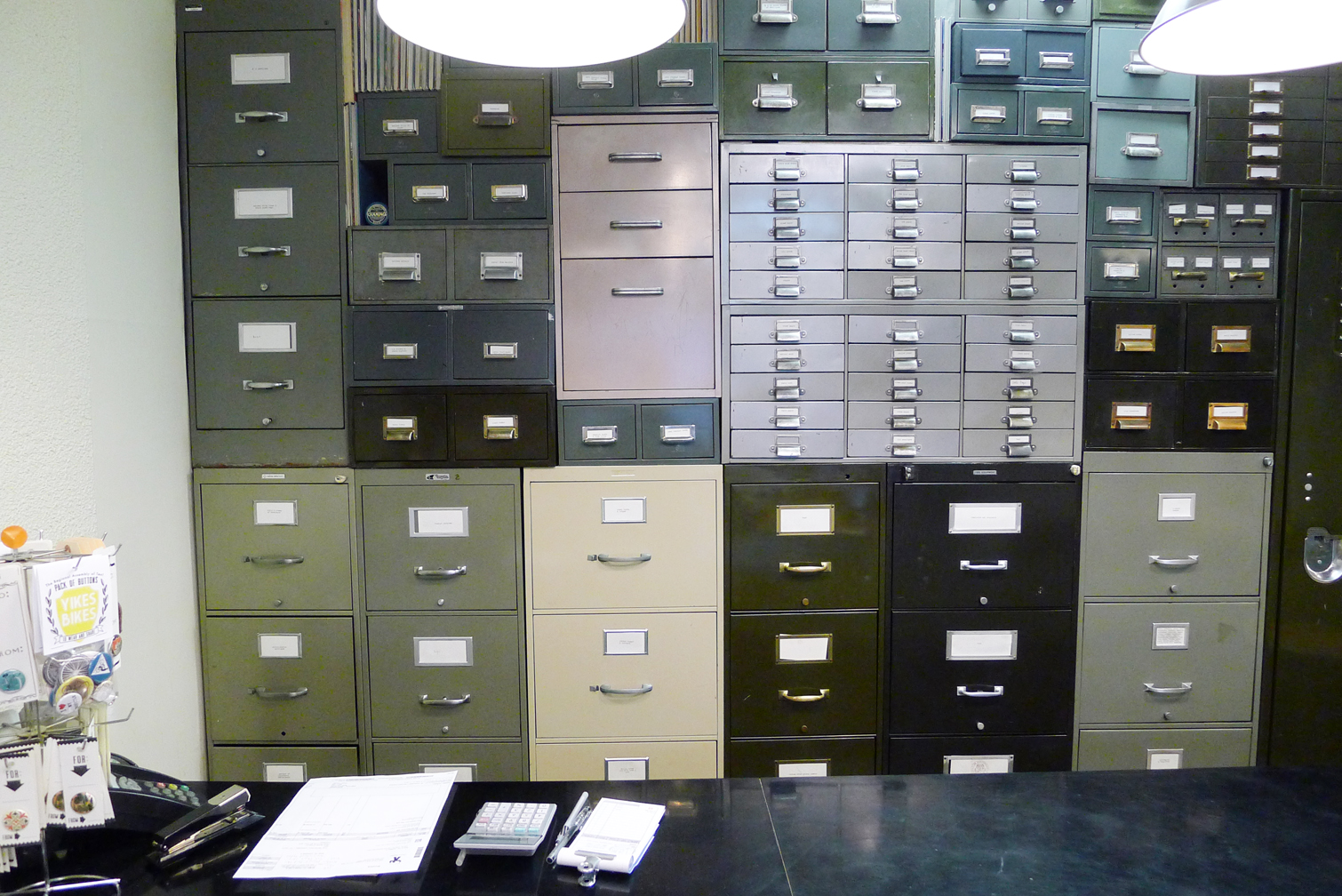 ML:  Have you noticed the neighbourhood change since the store started in 2005?

BF:   Main Street has always had a lot of locally owned design shops.  That’s why we picked it!  I think since then, things have come and gone, but it’s been picking up a bit more.

There’s so many great things on Main Street, but it starts on, like, 6th and goes all the way to 30th and that’s a long way to walk.  I think there’s little pockets of it that are starting to become denser, but it’s also nice to still have all the old businesses here.

It’s still a neighbourhood.  You can go to your dentist, you can go do grocery shopping and it’s not a street full of new stores or anything.

BF:   Probably.  I think you definitely cater to your customers a little bit, but we try to do what we love first and foremost.

ML:  That’s cool!  Mail art seems to be important to the store.

BF:   Yes, we have our Letter Writing Club.

ML:  What’s the response been to the letter writing night?

ML:  I think it’s because you have type writers.  Which is pretty crazy.

BF:   Oh, so we clear out the middle of the store and put out one long table with all the typewriters that we have that are working [laughs].  Maybe fifteen or so.  Then we have paper and envelopes, tea and cookies and people come in, grab a paper and sit down and write.

It’s not a workshop or anything.  It’s just an evening.  We started it the month we opened the store, so we’re up to our 70th Letter Writing Club.  We must be at a bit more now.

ML:  Are there any regulars who only send out letters once a month?

BF:   We do get regulars, but I’m surprised by how many new people we get every month.  You’d think it would be the same people coming back, but we get probably 80% new people every time.  There’s around 25-30 people consistently each night!  It’s nice.

BF:   We have some people come from out of town, who heard about it and are here.

ML:  Have you ever wanted to keep a letter?

BF:   Sometimes they leave little scraps of letters, you know…

ML:  You can have a little show, like, Discarded Letters. 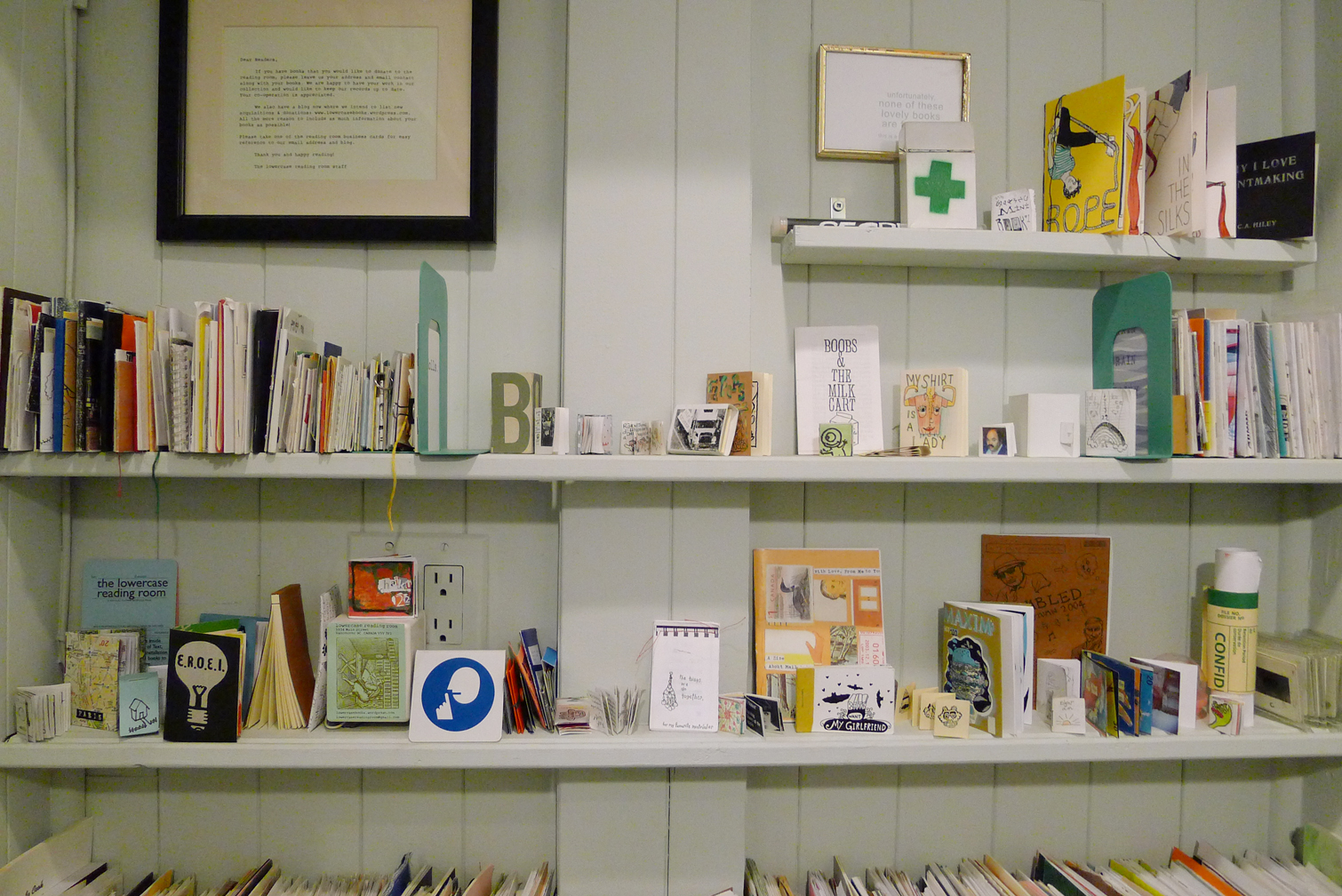 ML:  About the Lowercase Gallery, do you guys get zines through submission?  It looks more like your own personal zine collection!  A lot of them are so nice, I can’t imagine people submitting them.

BF:   Some of them we do buy when we go to zine fairs or see them at other bookstores…  Initially the collection was our collection we started.  That was during art school, when we started taking book making courses and trading with people.  We had this collection, and Rebecca and I were roommates at the time, so we had a little display on our wall.  It grew a little bit [laughs], and then we opened the store.

We wanted to use the space as a gallery, so we’d have different artists in there every month.  But it became a lot to curate a show, and once a month have an opening for it.

There are so many galleries in Vancouver already and alternative spaces.  We thought that maybe, because we had this big collection, to put it in the store.  A friend of our’s Jo Cook, runs Perro Verlag Books by Artists, and she’s been collecting books for years and years.  Way longer than us.  So she donated her collection to be shown here too.

It’s a combination of that and since then we’ve just been getting submissions from people donating their books.  Then sometimes someone will drop off their little collection they want to be shown.

ML:  That’s so sweet! Why would you not want your zine collection??

BF:   I know, exactly!  Or if they hear about it and they’ve published more than one book, or want to donate everything they’ve ever made…  And that’s really nice.  It’s fun because it’s local people, but we get a lot of mail submissions too.

ML:  Do you have any stashed away?  That you won’t put out?

BF:   You know, we have most of our collection out.  I don’t know if we do have any stashed way.  It’s just nice for people to come…  A rainy day is perfect to come and sit and read for a little while.  It’s a little overwhelming in there though, because there is so much stuff.

ML:  It’s like an endurance test.  Do you have any favourites in the collection?

BF:   Lots!  It’s fun to poke through it ’cause there’s things in there that maybe I’ve never seen even before.

ML:  Since you guys are artists, do you have a preference to book arts or art zines versus perzines?  Or like… a recipe zine?  It’s pretty eclectic though [laughs].

BF:  It is kind of an eclectic collection.   I like reading all of them!  Though, I think I do have a preference for colour…

ML:  Most of them are quite aesthetically-pleasing.

BF:   Yeah, I love all the bigger books too, because the books that we make are super tiny.  I’ve never made a bigger book.  I’m a little intimidated to make anything bigger than like 5 inches square [laughs], so I appreciate some of the bigger ones. 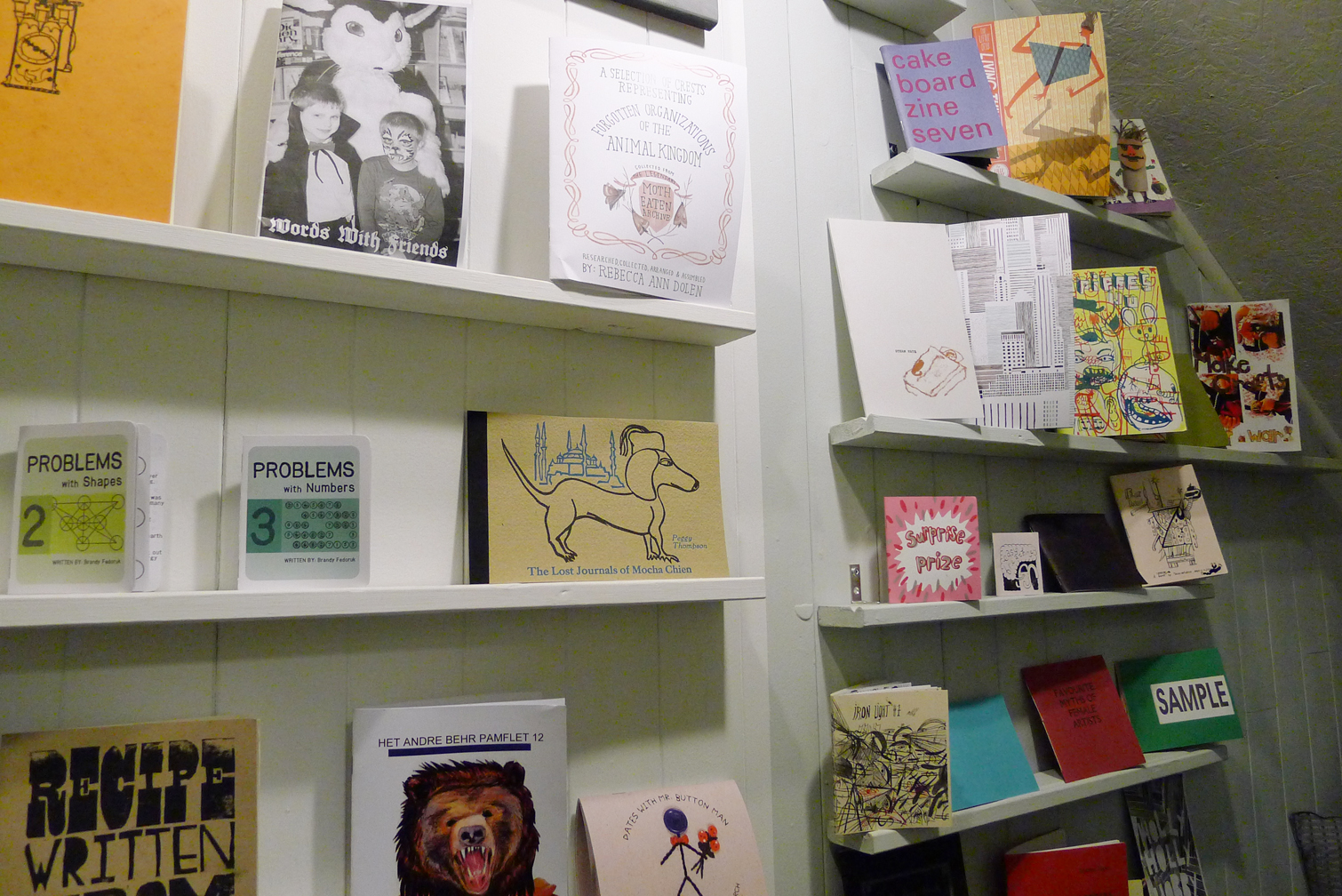 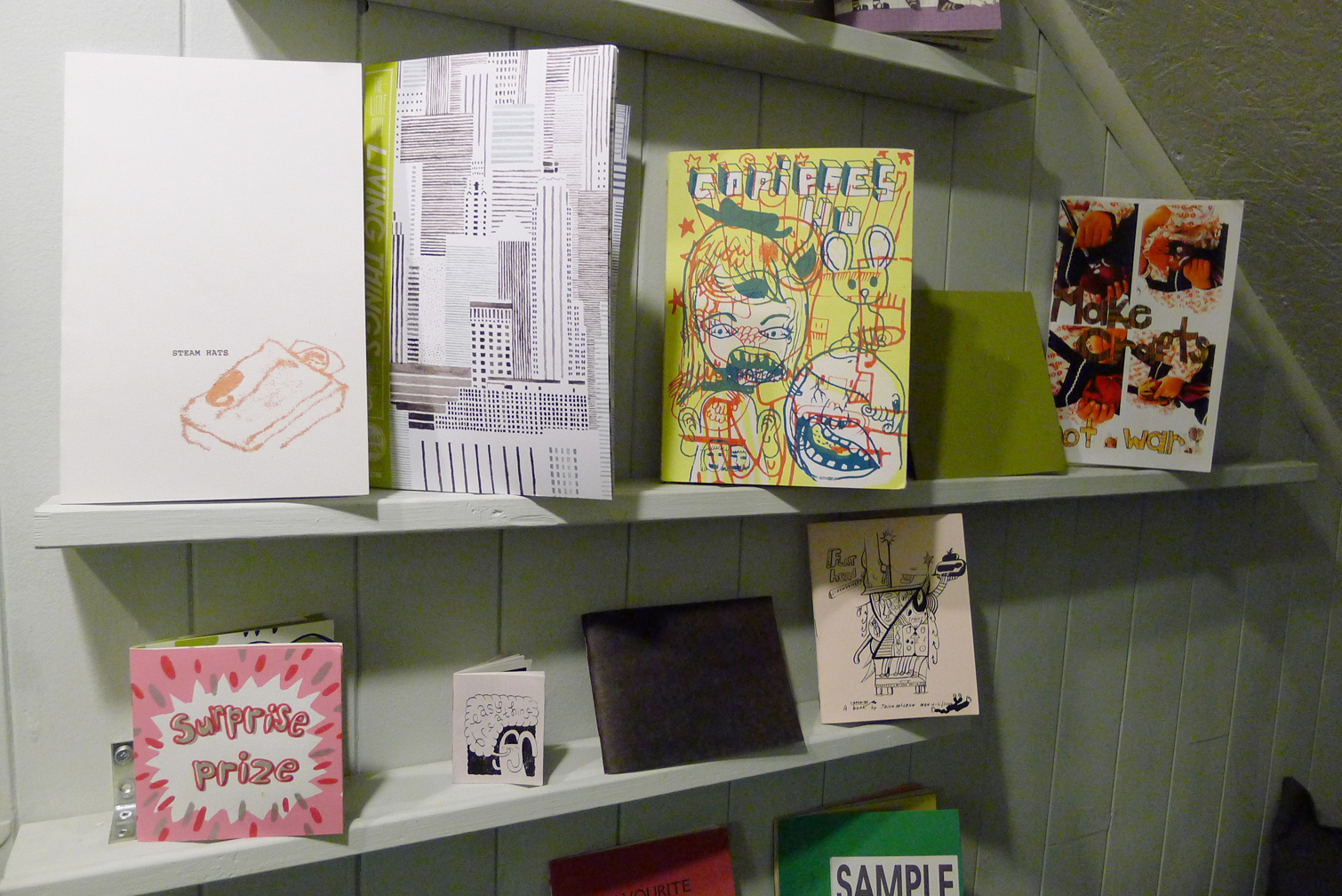 ML:  It’s also nice that you can peer into it from the cashier spot.

BF:   Yeah.  And then we have that little space that’s framed, the ones on the ledge.  We curate that space every once in a while.  What’s up right now are from the book launch we had in December.

ML:  So have you read all of them?

BF:   [laughs] No, there’s no way.  But it’s exciting to be able to go in there and pick something up I’ve never seen before. 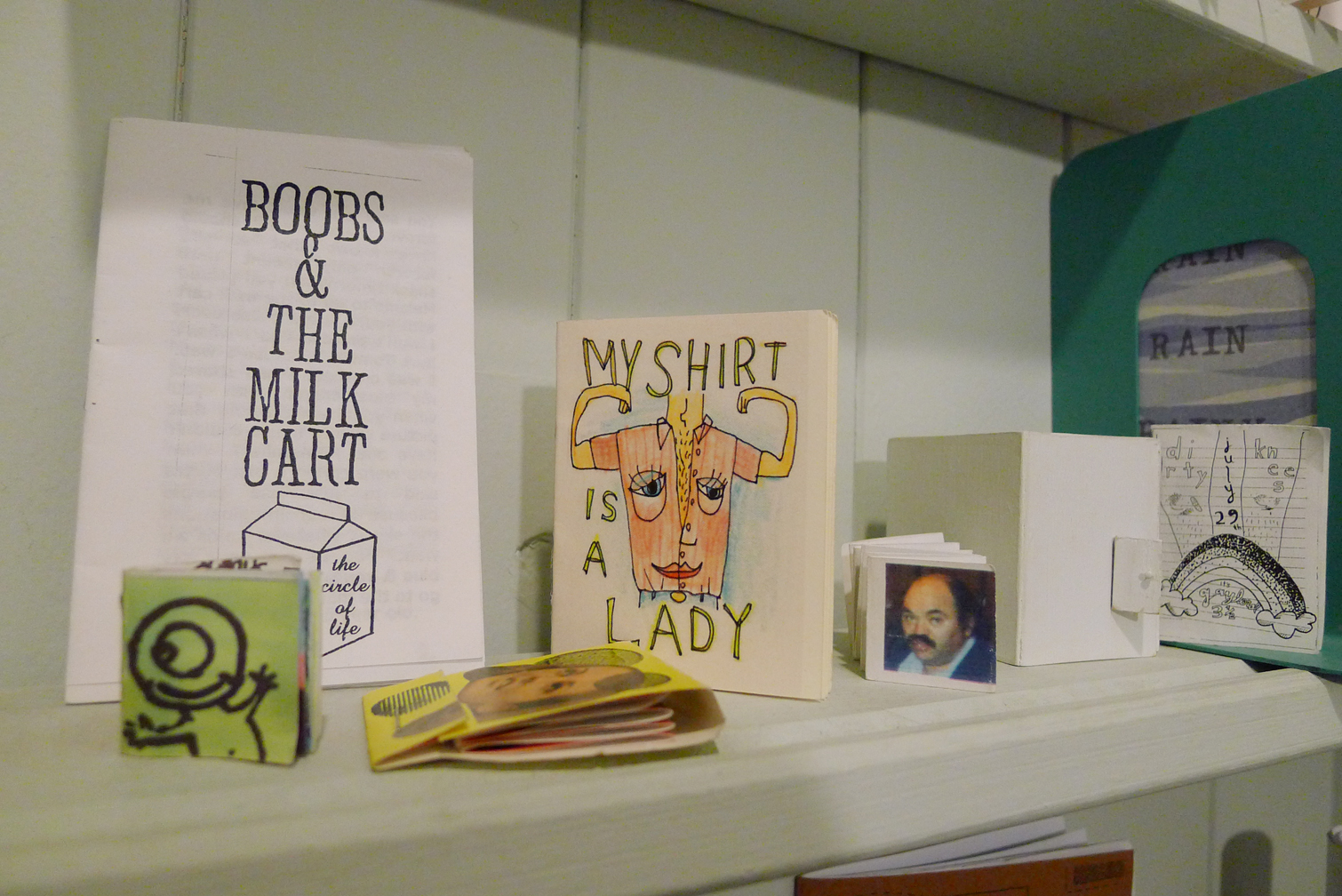 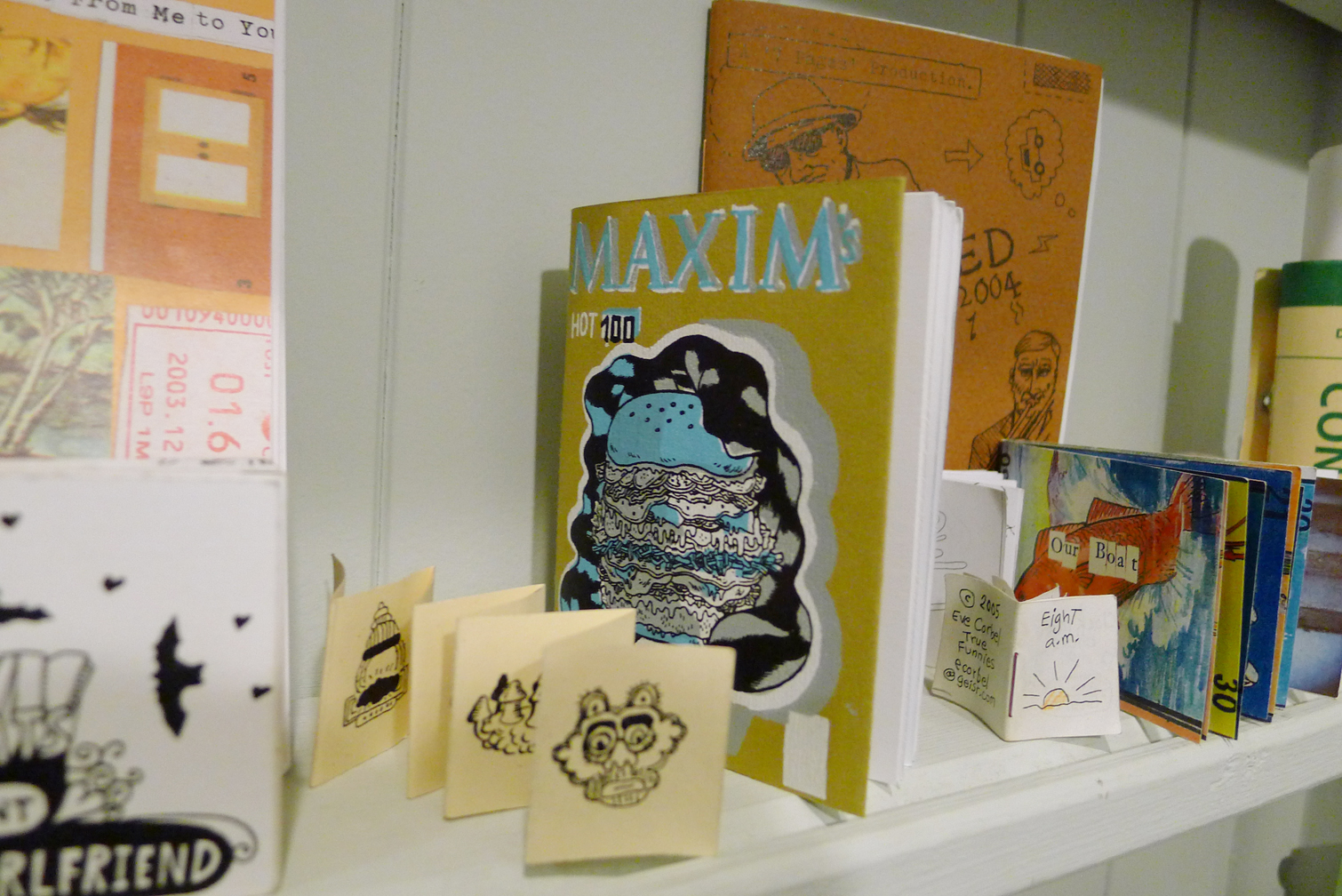 ML:  What are the future plans for the The Assembly?

BF:   Well, for the Reading Room we’re thinking about having two major things a year.  Like in December, we’re having our annual Book & Beer launch.  We gather artists and each publishes a book and along with it we brew a batch of beer.  Then each artist picks a bottle for their beer and designs a special label for it.  They’re limited edition so we have an opening night where they’re sold.

This was the third year in a row we did that and it’s really popular and super fun!

ML:  I’ve never heard of this before!  It’s so different, I really like it.  Where’s your beer? 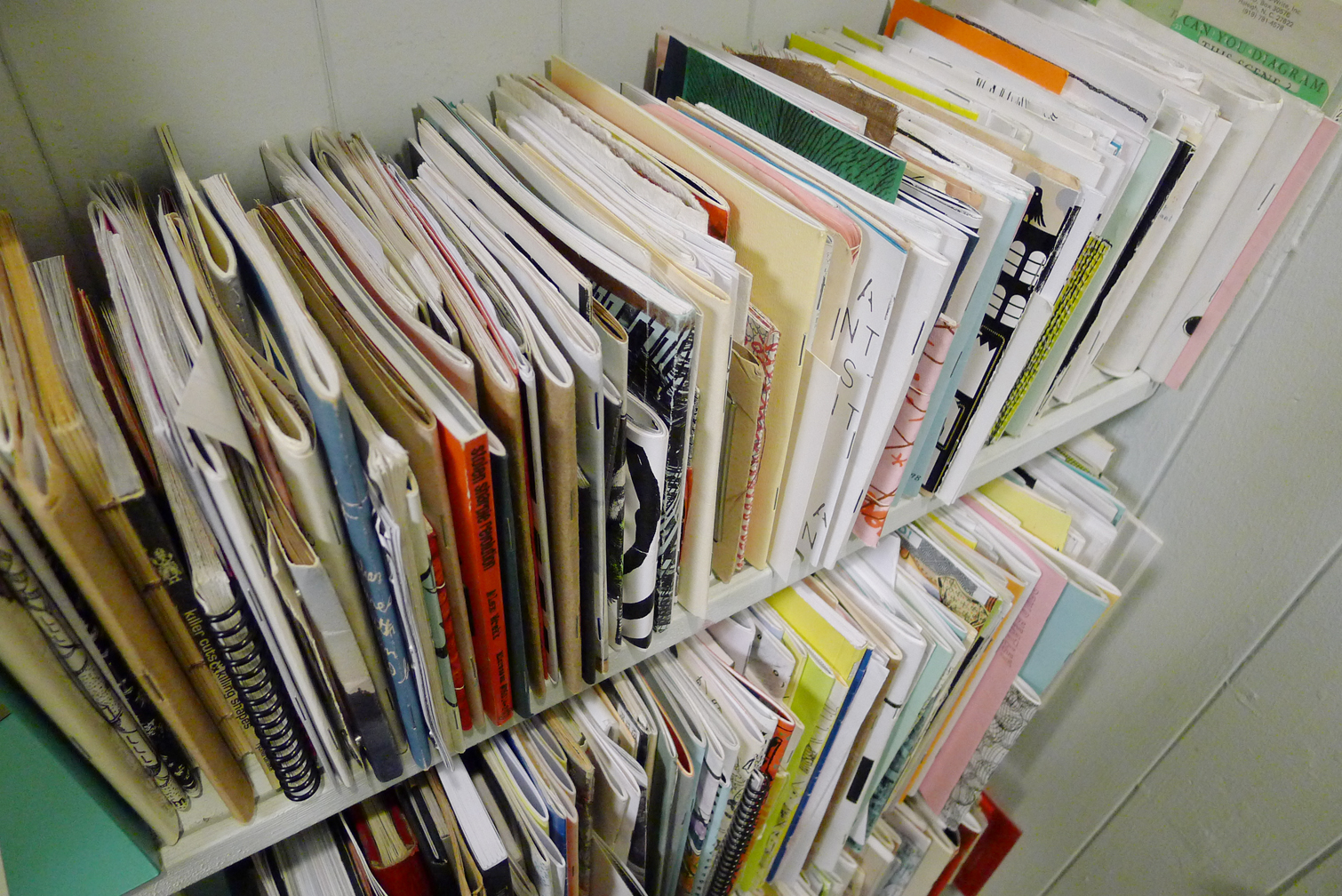 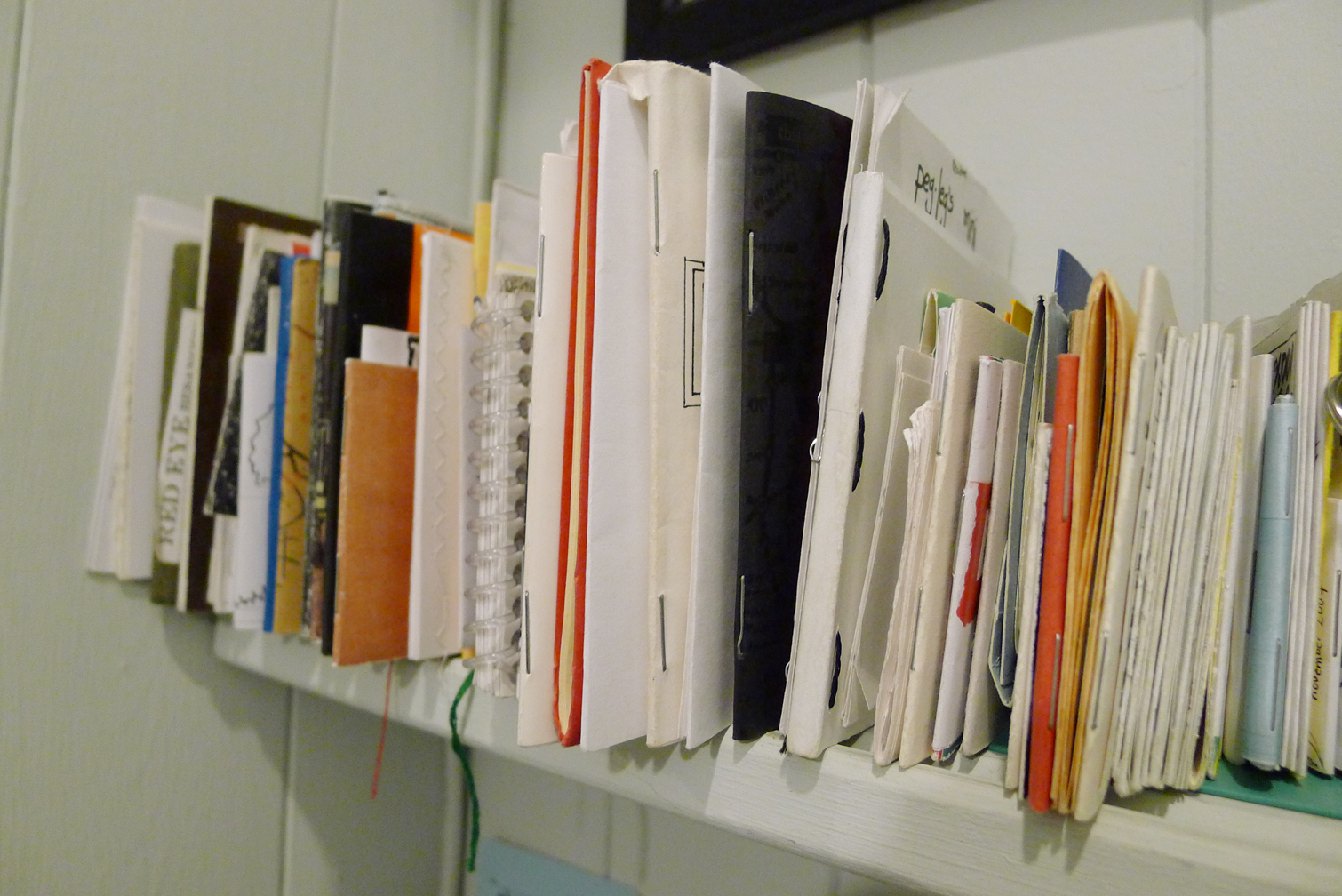 BF:   So there’s that.  We were also thinking about starting something else for late spring, early summer so we had two kind of events.

It’s easy to forget about the reading room a little bit because it’s not part of our business per se.  We don’t generating any profits from it, and same with the letter writing club.  But they’re things that we love to have in the store and we’d never think of not having them.

ML:  Well considering how many letter writing nights there have been, you’re on a pretty good streak.

BF:   [laughs] That’s true.  And we love having them, letter writing night is super fun.

For the store we’re going to grow our wholesale business because we sell a lot of our designs to other stores.  This year we’re going to go be a part of the New York stationary show.

BF:   Yeah – It’s a bit crazy.  A lot of the stuff is not super nice… it can be pretty awful, but there’s a lot of independent businesses that participate.  So that’s really exciting.  We went a few years ago to just to check it out.  There’s like 5,000 booths.

BF:   Four days, everyday, all day I think.  It’s going to be exhausting, but we’re excited. 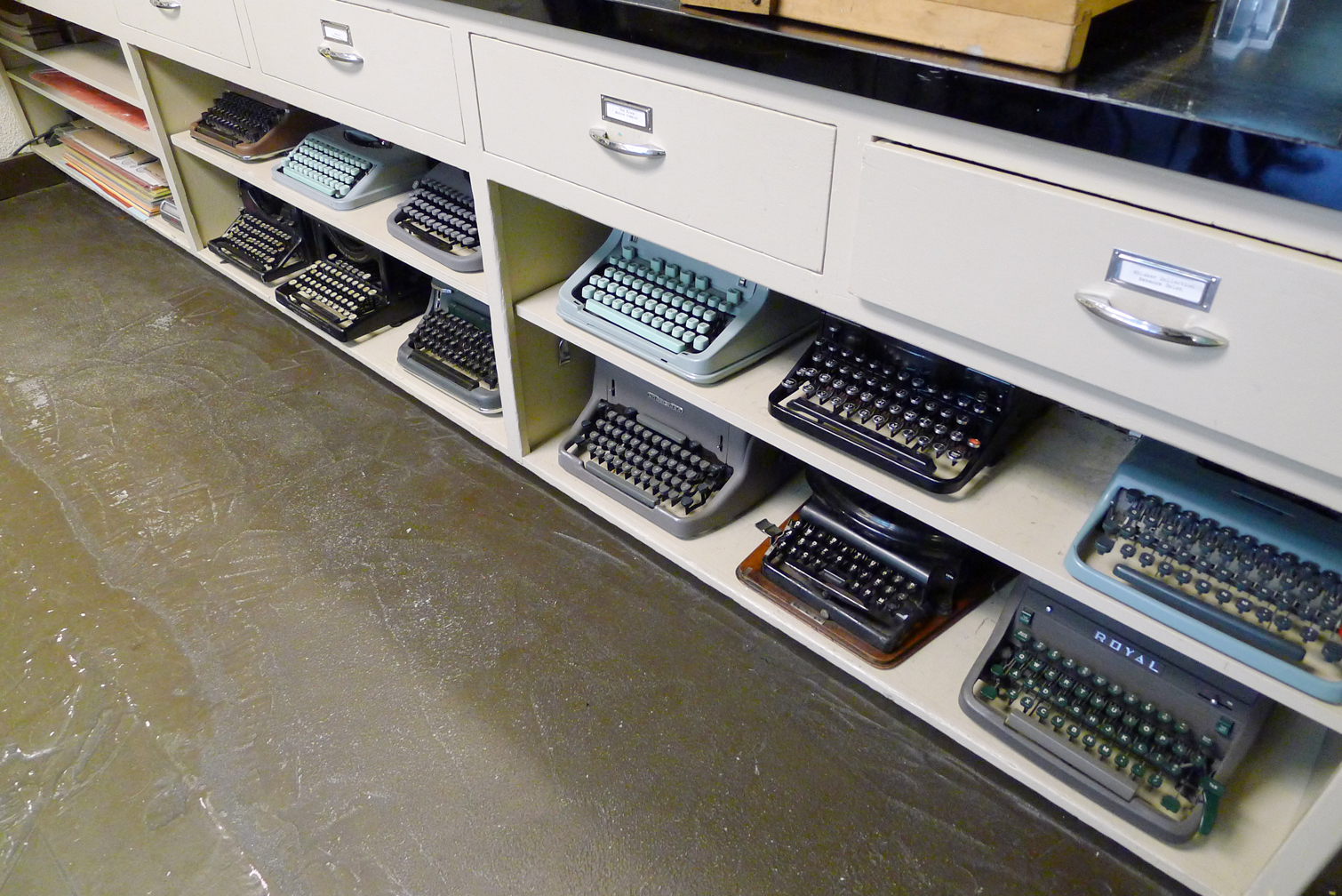