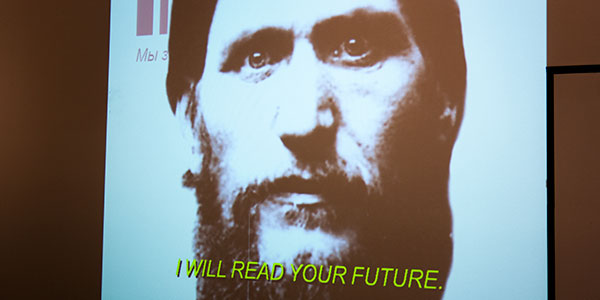 Our intern Paul Rocca is covering the 2014 Vector Game + Art Convergence – a yearly festival of workshops, exhibitions and panels all related to independent gaming, game-related art and all the intersections in between. The fest runs until this Sunday, Feb 23. Keep an eye on this space for more info and recaps, and visit the festival’s website for a full schedule. The Vector Game + Art Convergence festival is in full swing, and I’ll admit, the event has had me excited from the start. Independently-developed games and other interactive or experimental digital works are still growing in terms of cultural accessibility, and festivals like Vector have become instrumental in the celebration of the medium’s potential.

“Games, like any form of media, are capable of communicating messages to us through a combination of visual, aural, narrative, and ludic techniques,” says Vector curator and Broken Pencil columnist Skot Deeming.

“Like any creative medium, it possesses within in it the capacity to evoke emotions, act as critique, move us, shock us, make us think about the world around us, or even give us cues to think critical about the medium itself.”

Our look into this year’s Vector fest starts at the Punk Arcade exhibit in OCADu; a showcase of various interactive works fitting the exhibit’s mantra of minimalist, accessible game design. Among the games on display were a few I recognized:

Whereas Ayles’ game siphons pure, violent adrenaline and animosity rooted in tropes of punk culture set in 1979, Kopas’ HUGPUNX supplants fists and bullets with hugs, and its raw, lofi punk rock musical accompaniment with “Hold me Tight” by SCRAPS/Laura Hill—all while keeping the pink aesthetic.  Even better, the environment gradually becomes more floral and sublime as more characters (and kitties!) are hugged by the player avatar. Another familiar game was Pan Man, one of the monthly-produced games developed by Major Bueno (Benedikt Hummel and Marius Winter), and an oddly poignant look at the price of fame and the pursuit of an entirely trivial talent.

And then there was Martian Middle School Dance by Benedict Fritz—A game that, as soon as I saw it, had me convinced that it was a new project by the noted developer of acclaimed indie games Passage and Sleep is Death, Jason Rohrer.

The comparison isn’t based simply on its perfectly simple and colourful pixelated aesthetic, but on just how good it is at providing an honest and charming narrative looking into a common, unremarkable human encounter.  With a martian.  At a middle school dance party.

Among the other games on display was Eat Yr Tears by Jason Corace, a music-guided game where a depressive face cries tears its mouth (directed by the player) must, for some reason, eat—while words of despair escape its lips.

And another: Simon Wiscombe’s Rasputin Consulting Agency.  Place a hand on a touch-sensitive pad, and a wide-eyed Rasputin will tell you your fortune.  After placing my head on the pad’s surface, Rasputin advised that I don’t let doctors bother me too much. “So what was your fortune?” asked Punk Arcade’s curator Lee Tusman curiously.

“Well, let’s just say it was the first and only time I felt like Alexandra Feodorovna,” I replied.

The theme of Punk Arcade’s exhibit diverges from the classical understanding of games to a more wholistic and richer standard.  The games on display are interactive experiences as much as they are framed artworks, much to the credit of curators Tusman and Sarah Brin, as well as all the independent developers who contributed their works.  Punk Arcade stands as a gallery of just how varied, clever and subversive the digital medium can be.

And that, surely, deserves to be celebrated.

Vector Game + Art Convergence Festival is currently running from Feb 19 to Feb 23.  Tickets and passes are still available at the event’s website.