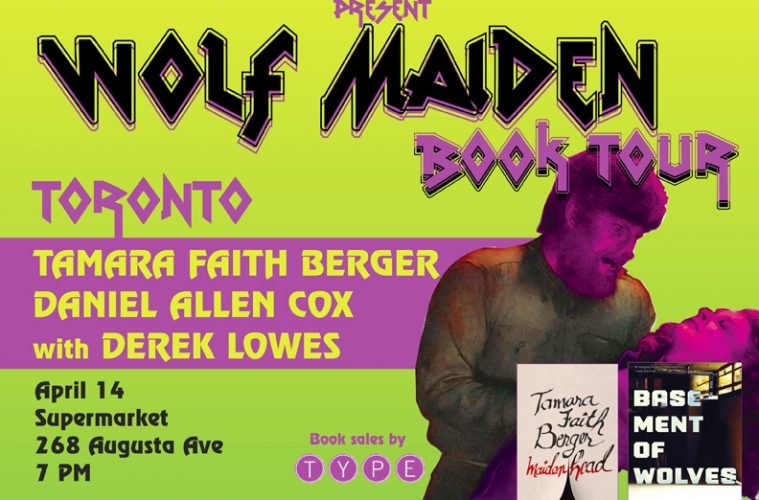 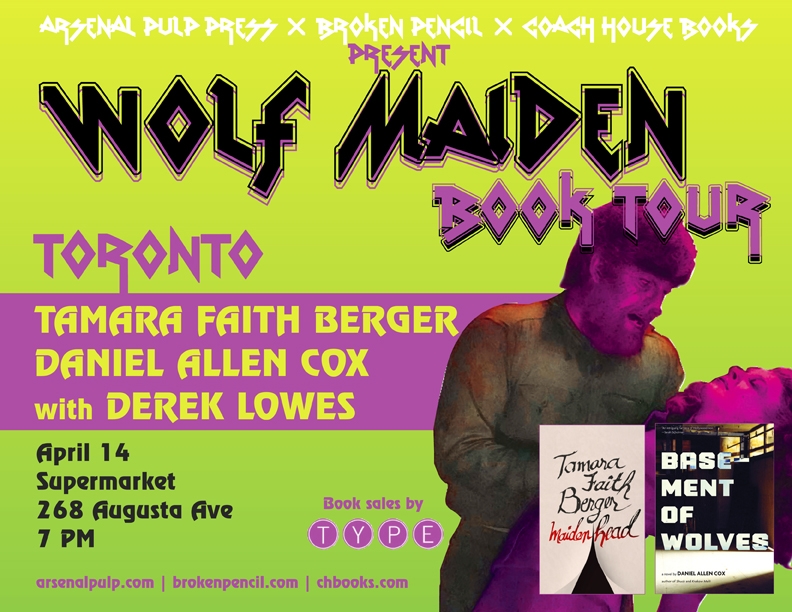 Ahead of Saturday’s kick-off to the Wolf Maiden Book Tour (the launch of Tamara Faith Berger’s Maidenhead and Daniel Allen Cox’s Basement of Wolves), Broken Pencil‘s fiction editor Richard Rosenbaum spoke with Faith Berger about the sexual themes in her work and her relationship with Canadian independent presses.

The openness and acceptance of the Canadian literary community has been a major factor in the success of Tamara Faith Berger’s work: “There are probably a lot of shit-flingers out there,” she says, “and yes I have received some thrilling understanding from the Canadian literary community. I haven’t had much exposure in the US at all.  Maybe all the shit-flingers reside there and maybe I’ll find this out. According to American artists A.K. Burns and A.L. Steiner who made a really inspiring lesbian and trans sex film called Community Action Centre, there is an ‘enabling audience’ and a ‘consuming audience’ for art. The enabling audience consists of the people you make things for, who support you and give you criticism, while the consuming audience is everyone else – they love you or hate you. I am grateful for my Canadian enabling audience.”

She’s had a strong relationship with the Canadian independent arts community for a long time – her books have been published by small presses, and the film adaptation of her novel Lie With Me was done by an indie production company. Here’s how she describes the benefits of working with small and independent presses: “There have been issues over the years such as lack of money and lack of support working with small presses, but I have definitely had more freedom to write the way I want as well as crucial input into the design of my books. I romanticize ‘the underground’ (whether that exists in 2012 or not) and I love small presses worldwide even as I understand the trajectory of writers moving from small presses to more commercial presses. Anyway, in literature you can’t get that big, and there are tons of larger presses that publish great books. But I’m not into bestsellers or blockbusters. I’m a snob that way. Also, who doesn’t want freedom to write the way they want?”

A major theme of her work is sexuality, but also identity – people struggling with their own identity, who they are perceived to be, who they are supposed to be, and who they want to be. Berger holds that sexuality and personal identity intersect and inform each other profoundly. “The gay liberation movement has taught me a lot about the intersections of sexuality and identity as both pain and pride, thus of course the compound: sexual identity. Everyone likely goes through a kind of coming out – simultaneous sexual self-expression with a shut-down or dissociation when they are growing up. This struggle against dissociation and alienation in the realm of sexual identity, well it’s all probably a good thing when one is growing up (and continuing when one is ‘grown.’) Sexual expression plus the question “who the fuck am I?” pitted against each other…”