Zine Philosophy is where DIY creators share their values, write a manifesto, and explore reasons for making. This edition is by Eugenio Salas. 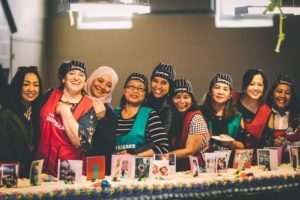 As you may have guessed, it’s a cake. But it’s not just any cake! The Supercake is a 22-foot-long edible art installation, created in collaboration with a group of middle-aged immigrant women with whom I have worked over the past four years for 8-10 hours a day, producing more than 3,500 cakes per shift at a cake factory in London, ON. We spend more time with each other than our own families, and have developed strong bonds. Despite our differences, we share migration histories and an appreciation for wholesome food. During break time and at social events outside work, we find that sharing our cooking brings us together. 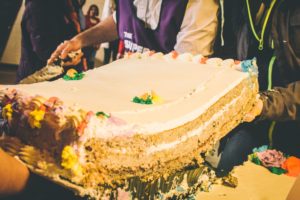 In preparation for The Supercake, I baked and shared a weekly homemade cake with my cake master colleagues during our lunch break over a period of four months. These cake sessions created time and space to discuss the project (logistics, cake flavours, etc.), which I documented on Instagram (@ssalassss). Through this semi-performative process, we uncovered a 1955 cookbook published by the North Yarmouth Women’s Institute including a coffee banana date cake recipe that everyone loved. It opened up an opportunity to intervene in local history-making with a present immigrant reality as an exercise to both decolonize and celebrate local gastronomy. Cake masters from Palestine, Dominican Republic, Turkey, El Salvador, Guatemala, Philippines, Jamaica, Indonesia, Mexico, and Colombia collaborated with a Métis artist to make the largest banana cake in south western Ontario — and possibly Canada. Troy Hourie, a Toronto-based installation artist and set designer, helped with the public installation of the cake at a church hall, which is a traditional venue for community events and collaborative cooking. Although the participating cake masters were paid for their creative and physical labour, they reflected on the differences in how they are recognized for their factory cake making versus their involvement in The Supercake.

A participant said, “On a daily basis we don’t get appreciated, even though we work hard, and this is not a job and we get overflowing appreciation.” 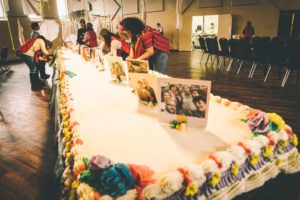 The Supercake is part of a larger process-based, participatory art project called Breaktime/Overtime, which examines the food production industry in southwestern Ontario. It’s a prominent and rapidly growing sector because of its easy access to fresh water from two lakes (Huron and Erie), close proximity to Canada’s agricultural farm belt, and readily available energy and land infrastructure. Breaktime/Overtime has brought together the paid work I do to sustain myself (food production and catering) and my artistic practice. This integration has been artistically generative and opened up a line of inquiry around the economic realities of artists in an economically depressed region. There is a romantic perception of London’s art scene influenced by the history of the so-called Regionalism movement in the ‘60s and ‘70s and activated in its current form by a generation of local artists whose subjects are devoid of contemporary and local socio-political issues, and who predominantly make object-based art that circulates in commercial galleries and art fairs. As an immigrant artist and factory worker, straddling worlds that usually remain apart in London, an opportunity opened up to respond to London’s economic and artistic landscape, in collaboration with my co-workers and based on mutual cooperation and trust. We made a cake— a giant cake — on our own terms, using the skills and knowledge we acquired working at a cake factory, reimagining the production line and reconfiguring its production logic as a way to reclaim artistic agency.

The Supercake was supported by a grant from the Ontario Arts Council and co-sponsored by Photos by Carlos Medina and Cristina Mendoza Sagastizado (lower) McIntosh Gallery and Trinity United Church.