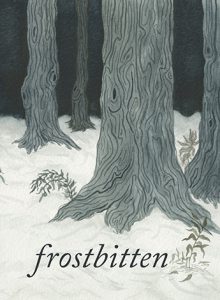 Frostbitten is a mysterious and deep forest fantasy zine. It is also printed in highquality colour on very nice paper. These reasons alone make me want to recommend it wholeheartedly. But maybe I should push a little further into the dark woods portrayed in this story. Bartram is a triple-threat writer, illustrator, and designer, and her skills are on full effect here. The story concerns a woman, perhaps dead, who has decayed and been reconstructed as someone who, “works for the woods now, tending the forest floor and sweeping the debris of each season under the edges of the next,” and scares off campers who have overstayed their welcome in the forest. It’s kind of like if the Blair Witch was a sympathetic protagonist. What’s interesting about the character is that she has no idea who she was in her past life, she was once a person amongst people, and she does not know why she has been given the job of woodland caretaker. What happens next is a whole lot of ambiguity: visions of boys with pigeon wings, women with raccoon paws, disappearing corpses, spiritual fireflies. The fact that nothing gets resolved is irrelevant; the mystery becomes wider and more marvelous, enthralling the reader. The illustrations are perfectly macabre. They match the text with a palette of dense greys, browns, and impenetrable greens. The characters lie somewhere between children’s bad dreams, folk imaginings, and mythic beasts. I won’t say any more as to not spoil the subtlety and secrecy of this book, but if you’ve ever been lost in a weird wood and want to relive it — leaf through this one. (Neal Armstrong)