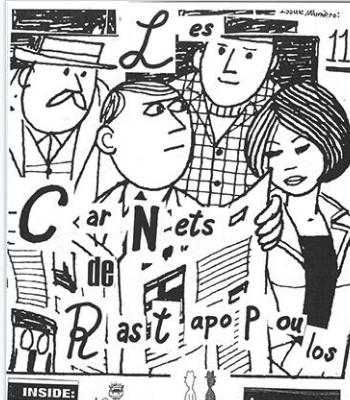 LCR has that distinct look of the classic old-school weirdo zine: typewriter, cut and paste, scribbles, total chaos. In this issue, Rob talks airports, which he confesses to love.

Starting with the genesis of his appreciation for airports and air travel, Rob explains that he used to travel by bus, but has become enamored with the micro-world which exists past security in airports across the entire globe. He even gives us a list of some of his favorite terminals, and I was all kinds of surprised to find that Winnipeg (my current home) made the list, alongside Dubai and Melbourne.

The bulk of the writing consists of short notes on the lives of some people who have spent extended periods of time, up to 17 years (!), living stranded in airports, for various reasons (homelessness, political or refugee limbo, broke). Worth a read!

From front to back, an average reader may take 20 minutes to read this zine, and it kind of feels like a slightly drunk uncle telling stories about that one thing he’s incomprehensively obsessed with. So it’s entertaining, if you’re up for that! And the collection of ephemera (tickets, drawings, airline brochure illustrations, graphs and related airplane “stuff”) used to completely blanket the pages adds that extra charm. (Stephane Doucet)