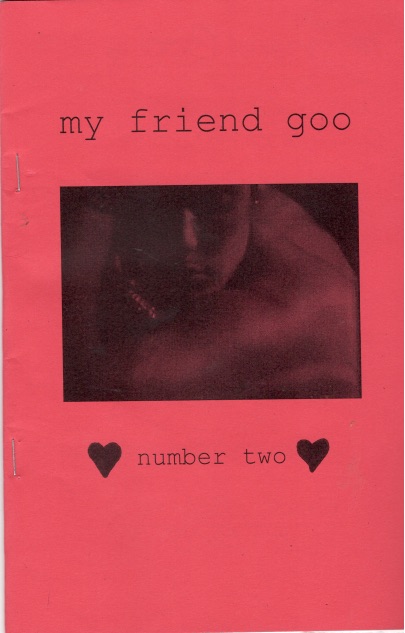 Remember a few years ago when the film The Tree of Life came out? It was an epic, impressionistic symphony; Terrence Malick’s first film in years. It had an overwrought and dramatic trailer and at the time critics were talking about how moving and potent this masterpiece of 21st century cinema was. I watched it on my laptop in Guelph and, while I could see the obvious skill and talent that went into it, I personally couldn’t do anything with The Tree of Life.

That’s a little bit how I feel about issue 2 of My Friend Goo, a cut-and-paste labour of love dedicated to queer kids who grew up in the ’90s. It takes the form of a wistful letter addressed to an unnamed old friend looking back at high school with ample references to divorced parents, treehouses, Morrissey, and grunge music. The zine is constructed with care and I’m sure it will touch someone deeply but for me it felt a little like watching Sean Penn squinting through an urban landscape while Zbigniew Preisner’s musical score soars into a dramatic climax until I have my head in my hands wondering: “What the heck it is people love so much about this?”

Sorry, back to the zine. My Friend Goo is not just a zine about the ’90s, it looks like the ’90s. The typewriter font is interspersed with hand-scrawled lettering for an effect that’s more personal than just straight text. There are hearts and smudgy photocopied images that will bring you back to your high school days when zines like Fuzzy Heads Are Better and Kiss Machine ruled the day. So if you think you’re up for an emotive, 90s-tinged trip down memory lane with Audrey, send them an email. (Chris Landry)