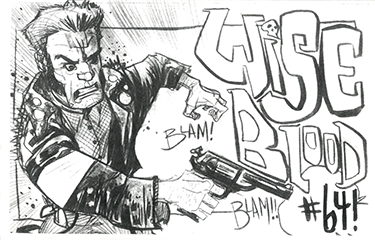 “Every time I hear a Cat Stevens song I think of that year I laid in Jessie’s bed guzzling vodka and spinning her records.”
Well that’s is one hell of a way to start a zine. Our author, going under the moniker Fishspit (no relation to the Montreal zine, Fish Piss), has been publishing Wiseblood zine since 1984 and has since produced more issues than zine legend Aaron Cometbus – no small feat. Mixing weary humour with hard living, these Bukowskian tales are coloured by both mental illness and addiction. The prose is not stylized but the imagery is vivid and occasionally melancholy as Fishspit eschews literary devices in favour of a more conversational tone. Sometimes compelling, other times disturbing, Wiseblood doesn’t sweat its blemishes, but rather, wears them with pride.
Wiseblood confronts its reader with a paradox: the author comes off as somewhat of a marginalized outsider, admitting to struggles with addiction and mental illness, but at the same time he occasionally uses problematic language about others. At the center of it all is a sense of vulnerability. One story takes place at an animal rights demonstration where Fishspit befriends an Israeli-American who helps smooth over a tense situation with a cop. He describes his ensuing friendship with this man, confesses to what he describes as his struggle with Antisemitism, and describes how his new friend helps him with his depression. There are a lot of startling, unexpected moments like that which emerge from the wreckage perfectly formed. I have mixed feelings, but I can’t not admit my fascination with this authenticity of this work. (Chris Landry)