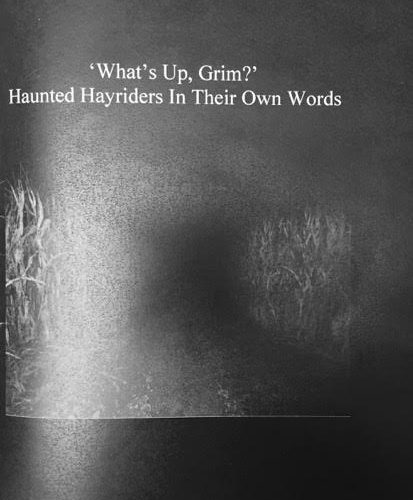 ‘What’s Up, Grim?’ Haunted Hayriders In Their Own Words 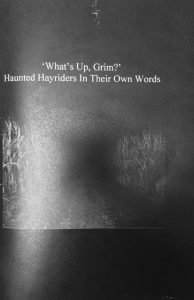 As the title suggests, this slick, thick, white-on-black zine culls quotes from a motley crew of New Jersey hayriders. Although playfully attributed to the Grim Reaper, I suppose this collection came together via the efforts of ghost-author Adam Finchler, who probably recorded said remarks as he worked these corn fields one Halloween season. Some comments are blatantly directed at Grim (“‘Oooh it’s the Grim Reaper! The grim pooper!’ —boys, 10”) and/or his zombie pals. Others seem overheard. Many are stereotypically Jerseyesque (“‘Who gives better blowjobs, men or women?’ — woman, 25, in a cheetah print jacket, to Zombie Mike”), while a few are intriguing (“‘I love your chest hair, feed it to me for breakfast’ — girl, 10”). But honestly, despite its festive design, I felt overwhelmingly bored by page 20, as the quotes struggle to render even an occasional snicker or second take. Although Grim’s faux authorship keeps things campy, I kept wishing Finchler used these quotes — not to mention all this physical space — as an occasion to craft some interesting stories about his experience. Instead, the quotes begin to blur together and the whole experience of reading them feels exhausting. (Jason Luther)