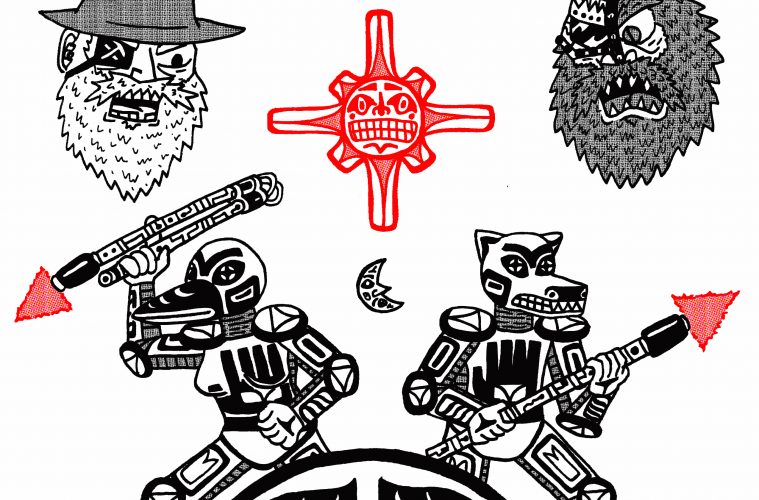 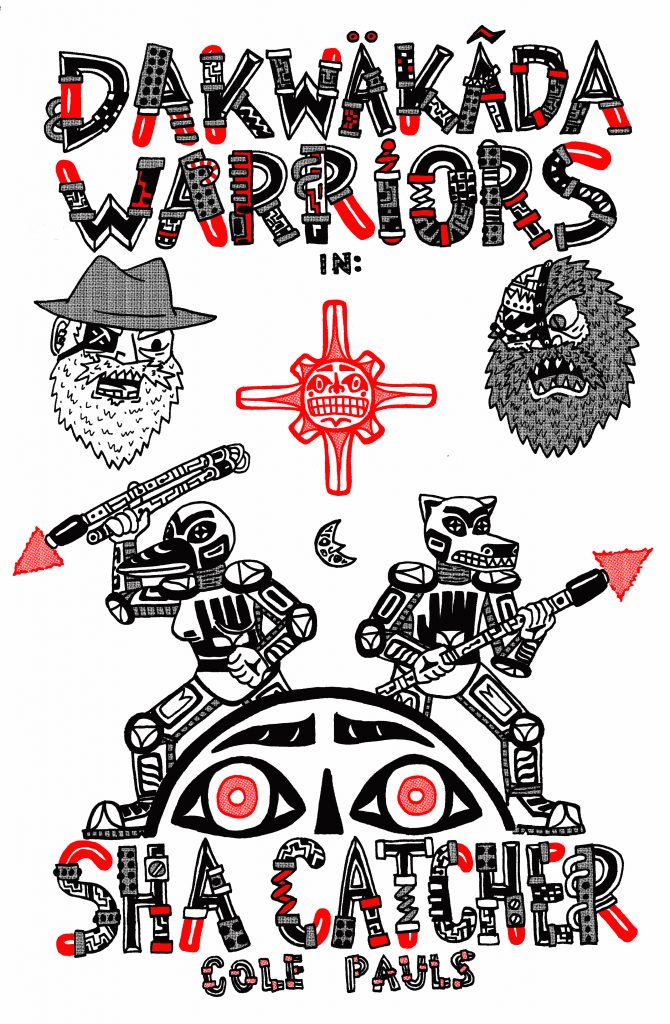 Since 2012, Vancouver comics artist Cole Pauls has made a name for himself drawing punks fiending for pizza. The aptly-named Pizza Punks strips have been collected in a few zines, were serialized in the free newspaper published by Lucky’s Comics and led to Pauls being interviewed by Nardwuar.

This fall, Pauls, who is Tahltan First Nation and grew up in a Southern Tutchone-speaking community in the Yukon, released his first comic paying tribute to his Indigenous heritage, titled Dakwakada Warriors in: Sha Catcher. The comic draws inspiration from a Pacific Northwest Coast legend featuring a Raven saving the sun to help protect the earth. As such, the titular Warriors wear wolf and raven power suits and fight to save the sha (sun) and nan (earth) from two cyborg villians (a Sasquatch and an evil colonial pioneer). As the two “Native Power Rangers” (in Pauls’ words) fight to save the world, they speak a mix of English and the Southern Tutchone language, with the typical “kick!” and “pow!” comic battle sound effects appearing in translation. It’s awesome!

We asked Pauls a few questions with his replies below. Keep your eyes peeled for part two this spring.

Can you tell me a little bit about the community you grew up in the Yukon and at what age you began making comics?

I was born in Whitehorse YT and grew up in Haines Junction which is a town of around 800 people about an hour and a half drive away from Whitehorse. Growing up there, I had such a strong cultural upbringing. Attending potlatches, having dance practice every week, going to fish camp every summer for harvesting, my parents and the community I’m from are strong supporters of Indigenous culture revival. I started doing comics at a young age, probably 6 or 7.

This is your first Indigenous comic. What inspired you to make Dakwakada Warriors?

I’ve had the thought of mixing my Indigenous heritage with comics since I was a child but it wasn’t until a couple years ago when I did a two-page comic about a Southern Tutchone superstition for a class assignment at Emily Carr. In the same class, I also did a four-page auto bio comic about my first critique at Emily Carr when a white lady with dreads asked me: “How does it feel to be a white male appropriating a culture you’re not a part of?” and I had to explain to her I was Tahltan First Nations and that there is such thing as a light-skinned native person.

You worked with two translators from your community in the Yukon (Stephen Reid and Vivian Smith) to translate the comic and provide a glossary of terms at the back. How was this process, given that you’ve known them both of them for a long time?

You can buy Dakwakada Warriors by emailing [email protected].