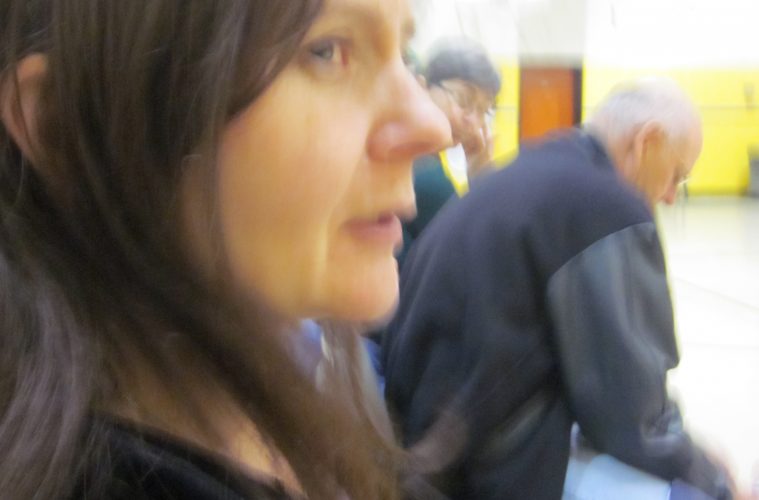 Aleks McHugh just recently turned stay-at-home writer and (mostly) non-fictional mother, states that seem to help stories materialize out of the clutter, to the extent she’s now got a novel to shop around. Recent articles appear in Briarpatch Magazine, which is based out of her home city of Regina.

No one is around when Kris arrives – except Leslie, who has shuttered the office.
“I’m kind of avoiding Sherry,” Leslie says. “She’s in a foul mood. Feels like she wants to hit me.”

“Can’t see her hitting you, Les. But, take care, obviously.”

Kris, who is not on front desk, has to mingle, and leaves for the lobby.

It used to be grand, this hotel. Its bones are still solid, heritage-worthy. But its dignity is marred by decades of hard living: the once-ruby-red carpet now rusty brown, under layers of caked-on white paint, the walls sweating ammoniac grease, occasional shocks of pinkish spray awaiting clean-up by someone like her.
Backpack over one shoulder, Kris heads for the second floor communal area to set up. There’s no manual for her job, no protocol. She’s not a street nurse, like Leslie, someone with hard skills, but a support worker, a social palliative. All soft. That’s what her supervisor at the mental health clinic had said. Well, not exactly. He’d told her she had some “boundary work” to do in that social-worky way of his.

Lacking any manual, she invites everyone to do a craft: everyone awake at the godly hour of 10:00 A.M.. Only Art and Frankie turn up. They’re drinking neighbours, veterans of this facility for Winnipeg’s hard-to-house. The alcoholic fathers she almost had, they’re her favourite clients. Still, she bristles at the word, “client,” especially coming from the probation officers. It sounds like, Thank you for choosing Corrections Canada, how can we be of service? She’s no professional. It’s not in her bloodline, which is skeptical at best.

Suckers for any female company, the jovial bachelors, who could be in their sixties, set about choosing construction paper and get a kick out of stabbing each other with collapsible pre-K scissors. In a permanent state of rice wine, they get glue and glitter everywhere. Even when tough girl on the block scoffs, “weave a basket for me, eh,” their amicable front holds up.

That’s how they pass every day, in good spirits, until Frankie decides to kick, leaving Art out in the hallway trying to lure him back with an old dog’s tricks.

“Could you just help me move this dresser?”

After that, the pleas stop. Kris becomes Frankie’s new best friend, the daughter who is now speaking to him, and other stock characters. Art becomes estranged number two dad.
Frankie ups his smoke allowance. He and Kris make frequent trips to the Millennium library, where he tries to occupy his mind with Louis L’Amour paperbacks. But his thoughts have a mind of their own. Released from the haze, his past keeps coming around to tell him what’s what.

Frankie points to one of the darker patches on his deeply soiled carpet, as if it was blood, or is. “A lady died there, partying. We was partying. Cops came after, wanted to know what happened. But I was blacked out, honestly couldn’t say. She was nice . . . a hooker, but . . . and a friend.”

He shakes his head, fingertips massaging his temples, trying to work the memory out. No good. It’s stuck. Kris mumbles something reassuring.

Kris has been filling him in on how Frankie is coping. At the word “coping,” Ben digs in again.

“You know, a lot of well-meaning types come in here thinking our residents can have [making scare quotes with his fingers] ‘normal lives’ in the suburbs. That’s not going to happen.”

Ben has put a good decade into this place and knows of what he speaks. His British accent makes for high contrast with Kris’s prairie vernacular, which Ben finds very Fargo. It also makes his lecture sound even more condescending.

In other words, they clash.

As if his job wasn’t wearying enough, Ben’s got charcoal manliner smudged around his eyes, blue-black hair, matching nail polish, the requisite leather and skinny jeans. Black, black, black. Trying to match his surroundings, Kris guesses. She has no discernible style, or could be aiming for bland, which doesn’t take much aim, is trying to blend too, or maybe disappear.
The well-meaning types are vindicated when, a few weeks later, another resident, Vicki, is deemed a good candidate for suburbia, having grown up there. Ah, well, Kris thinks, anarchists are good at running hotels, but they can’t always predict the future. She meets Vicki at the next-door bar for a last coffee.

“You must think Vicki’s moving to the suburbs is a good thing, hm?”

“More like being shunted off into a beige coma of indefinite duration,” he continues.

“I’m not advocating anyone graduate to the suburbs,” she says, biting into her bottom lip. Her defense must end here. Anarchic pretensions aside, he’s still her boss.
His eyes tighten on her. “Never mind,” he says, and leaves.

Kris hurries up the stairs to Vicki’s room. The social worker is already there to transport Vicki to the outskirts where she will be put up in someone’s spare room. She gives Vicki a tight hug and tells her “take care.”

Her only other prospect for female companionship is Brenda, a real fire-starter. She also claims fires of unknown origin, letting out yelps of responsibility at the sound of passing fire trucks and even ambulances when overly anxious. Ben has suggested Kris spend more time with Brenda and less with Frankie. 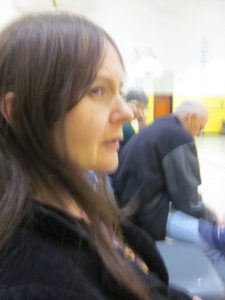 Aleks McHugh just recently turned stay-at-home writer and (mostly) non-fictional mother, states that seem to help stories materialize out of the clutter, to the extent she’s now got a novel to shop around. Recent articles appear in Briarpatch Magazine, which is based out of her home city of Regina.

“Why don’t you help her sort her closets. It feels better to grab chaos by the reins, pack it away in drawers, right?”

Kris stops by Brenda’s room and offers to pitch in. They start some piles. Brenda’s comments are on task, except for her preoccupation with the fact that staff have removed the knobs from the common area stove. Does Kris know why they did this? Her expression flat, Brenda is unreadable behind her flickering eyes. Space organizer was Kris’s best stab at friendship. They fail to connect.

The day comes when Frankie is drunk again. His arm is broken, and he’s refusing treatment, except to let
Leslie make him a sling. He holds the unmended wing feebly against his side.

“The buggers smashed it with a crowbar and took my TV,” he says.

His injury is the excuse he was waiting for to take it up again. The rye is helping him forget who did it.

Shortly thereafter his bowels give out.

It’s an ending Kris won’t watch. She’s not that kind of daughter. The good kind. Instead, she makes him a leather strip with Frankie sewn on it in yellow wool.

Frankie tells her “thanks,” a shaky finger petting the leather hide. “It’s Art what gave me the rye, you know, to help with the pain. Been a good friend.”

Frankie’s reuniting with Art later, who has come into some cash and is springing for booze all around. Does
Kris want to join them after? They can make their own paper, like she’d wanted. His wounding has made him desperate.

“That’s okay, Frankie. You and Art go ahead.”

On the way out she tells Ben she’s quitting, which barely earns her a smirk. “You’re just a casual,” he says.