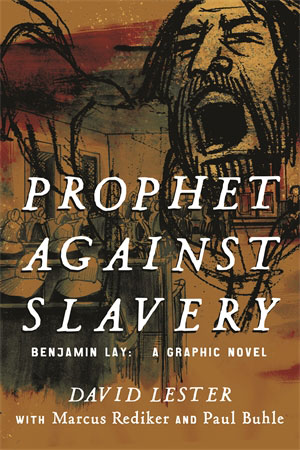 A Prophet Against Slavery

Moving images, a passionate script, and a compelling narrative in one. A Prophet Against Slavery by David Lester showcases the unlikely story of Benjamin Lay, a Quaker Dwarf Activist, as he stood up for the abolition of slavery and the emancipation of all living things from the tyranny of others. This graphic novel’s style of scrapbook-esque illustrations layered over each complemented both the chaos of the era it represents and contrastingly, the simple and stripped-back lifestyle adopted by Lay and his wife, Sarah, in their relentless pursuit of justice.

The graphic novel captures the despicable imposition of power by American settlers onto African captives against the inexorable force that was Benjamin Lay. The pacing allows the reader to reacquaint themselves with the historical passage of slavery and the involvement and stance of the Quaker people as they settled into America from Britain. Though some scenes may be sensitive to some, depicting the harsh realities of racist violence and aggression, the book did not harp or linger on these images, or exploit trauma to hold the attention of the reader. New knowledge has been brought forth to me through this graphic novel, an important element of history that has been buried under the demoralization of white supremacy that ensued following Lay’s death. As Rediker put it, systems of injustice work can be perpetuated by the “traps and perils of complacency.” A solid read.