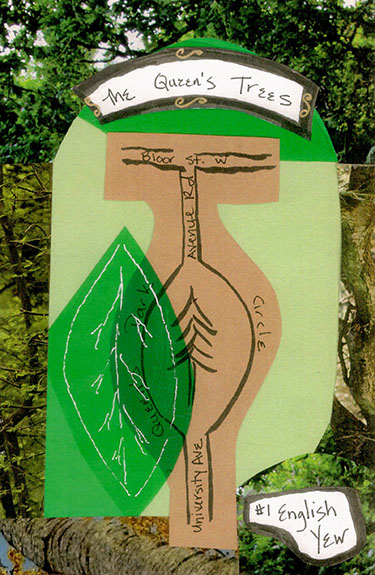 From the fairly-unremarkable sidewalks of Bloor Street in downtown Toronto, swing south past the Royal Ontario Museum and stumble full-on into Queen’s Park, home of a massive horse statue, some benches and, oh, the Ontario legislature. Queen’s Park is also home to some cool trees, including the English Yew. A less mainstream tree to be sure, but not one without a badass back story. I won’t spoil the fun and terror — I’ll let author Amee Hood do that from within the pages of this zine. It’s primarily a set of assorted facts about the Yew, some touching on the nature world and some touching on weird mythological or deeply historic shit. Both are fun and interesting! The zine itself is colourful, glossy and kinda slippery to flip through. Also fun! Hood does a good job at keeping words brisk and to a point. They’re fast facts, essentially, on a bed of leaves and branches and bark and what-not. Key takeaway is not to eat the Yew, because you might die. Otherwise, it seems like a pretty great tree and definitely one we could all stand to read up on… or read under.