Anyone working with youth should read ‘Haircuts by Children’ 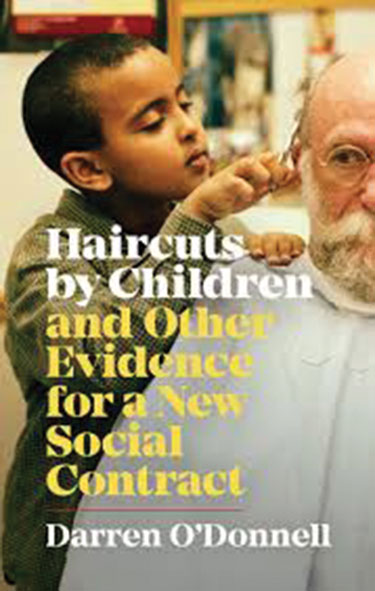 Haircuts by Children and Other Evidence for a New Social Contract

I have to admit, I never thought I would find myself pondering the benefits of child labour — and yet, here we are: playwright and urban cultural planner Darren O’Donnell’s thoughtful new work, Haircuts by Children, argues that incorporating children back into the workplace may not be as bad as we’ve been led to believe. Serving both as an exploration of the work that O’Donnell and his Toronto theatre company, Mammalian Diving Reflex, have done with children, and as a proposal for a new social contract in which the adult/child binary is broken down, Haircuts presents plenty of material to engage with.

Haircuts shines when O’Donnell covers his past collaborations with young people — such as the performance piece from which the book draws its title — and the methodology that he and Mammalian have developed from that: the Succession Model for Youth Labour Engagement , or SMYLE. Although 300 words isn’t nearly enough to unpack the nuances of the SMYLE, O’Donnell writes about the methodology and its outcomes for those involved in clear, quietly passionate prose that is inspiring while remaining grounded and readable.

Anyone working with young people will want to give this book a read — the material is thought-provoking, and O’Donnell’s conversational voice only makes it more engaging. Some of O’Donnell’s visions of children “bringing humanity back to the boardroom,” as he puts it, feel a little too much like wishful thinking, but his underlying notion of treating children as individuals to be learned from, rather than only to be taught, is worth taking into serious consideration for just about anyone. As a result of Mammalian taking that tack, he notes, the beneficiaries of the work they did with children were “both the children and the adults” — and that sounds like a change we could all use.