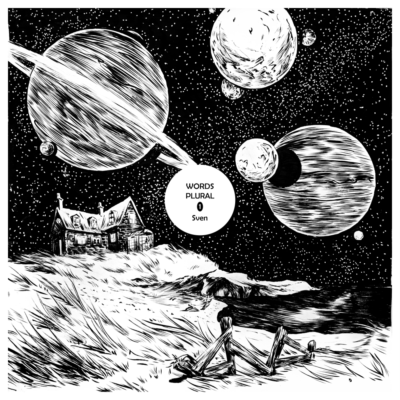 Words Plural, from mononymous Toronto artist Sven, collects three stories, one being a collaboration with the artist Rachel Evangeline Chiong.

The first comic in Words Plural, “Your Waves and Breakers” reprints and remasters an older comic of Sven’s. In it, an unseen individual reminisces on trips taken to a seaside home. The detached statements of text accompany art that, while vivid, is a little murky at times, with things running together and the readability between panels being a little lacking. The accompanying text is very much in the “comics as poetry” vein, and though the images match the writing, the connection between them isn’t as strong as it should be, feeling more like a juxtaposition than something working in harmony. It’s a comic that, by Sven’s own admission, shows a bit of its age.

“Lesser of Two” sees Sven working in an almost chiaroscuro-esque manner. A silhouetted figure works on a labour-intensive project, as text recounts a time when people’s doubles began to appear. There’s a harshness to the story that the silhouetted art captures well, uneasiness mounting as it becomes easier to identify what the silhouetted figure is working on. The ultimate payoff does feel a tad cliché when it comes to short horror narratives, but the buildup is well worth it.

“Celestine”, Sven’s collaboration with Chiong, an “anti-violence mood piece,” sees two astronauts on a large, rocket-equipped device, their dialogue focusing mainly on their concerns of what HQ will think of what they’re doing. It’s a well-drawn piece, however, the narrative itself is a bit unclear. There’s a what and a who, but the why isn’t as obvious as it could be.

Words Plural is a strong first issue for a solo collection and it’ll be exciting to see how Sven develops with subsequent issues.