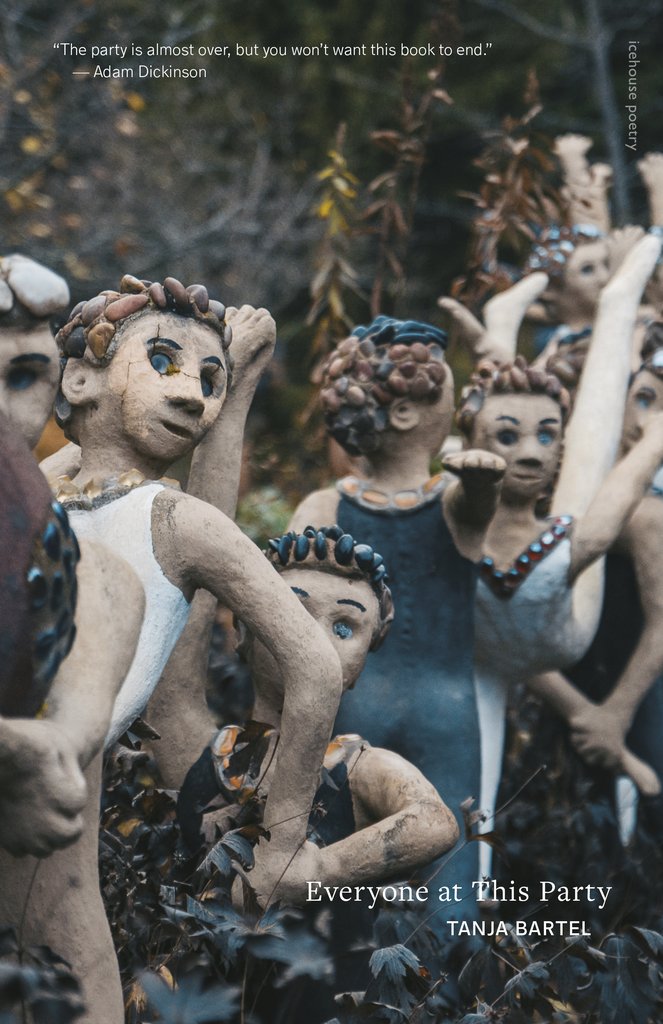 Everyone At This Party

Tanja Bartel’s prose is at its freest when it focuses on minutia, winding around the tiny, seemingly inconsequential everyday things. She has a way of latching onto the smallest of details and making you pause to feel them strongly, with more curiosity, reminding you that your eyes have memory, too.

In the poem “White Tulips”, for instance, the speaker leans over the open casket of her friend and comments to the deceased that her “Hair parted / in the middle, [is] something you’d never / do. But it was too late to fix it.” This tendency to fixate on detail, on the small picture that forms only a part of the devastating whole, is something to which anyone who’s lost a loved one might be able to relate.

Elsewhere in her collection, Bartel’s speakers — I won’t make the assumption that they are always autobiographical — express the frustration of a Ginsberg trapped in suburbia, coupled with a Hemingway-esque tendency to linger on conversations with friends over a bottle of wine.

A particularly poignant vignette titled “My Tarantula, My Therapist” exemplifies Bartel’s ability to deftly voice a character’s sadness using wit and acerbic detail, rather than submitting to the temptation to slather pages with pathos and move on. Similarly, the poem “This Signs,” reads largely like a list of truisms ranging from the inconsequential to the profound. The juxtapositions between the ridiculousness of bland suburban life and the desperation of a trapped human soul ring in increasing humorous and profound tones. The poem starts out with the universally relatable platitude, “The bladder has more to say than sleep,” winds up through “A really nice lady can do a lot of damage” and arrives at the desolate conclusion that “People pleasers aim to ‘make an impact’ on the world, / but it will be whisper-light, / like two dying people saying goodbye to each other.”

Bartel occasionally indulges too deeply in bemoaning the suffocation of everyday life. But she knows her strength, and it works. My unequivocal favourite line, in no way which I can explain, justify or equivocate, comes part way through the poem “Current Phobia Two: Kakorrhaphiophobia,” when the speaker simply states: “I will always love cheese. But there was no / Asiago at the gun show.”

That one just hit different.