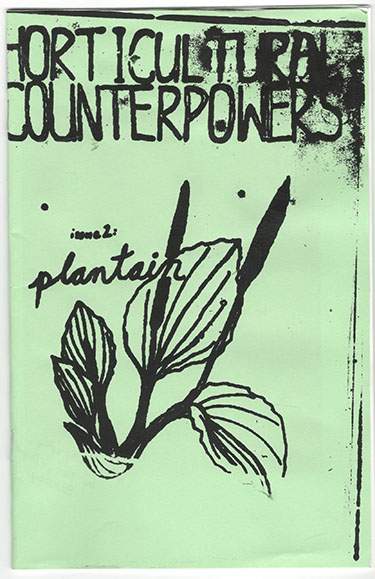 Zines are such perfect vehicles for unassuming, disruptive ideas, simple expositions or analogies that don’t need a full academic unpacking to disseminate their power. Horticultural Counterpowers seems to be such a zine. Billing itself as a zine about plants, politics, and art, its unnamed author creates a wonderfully compelling analogy between the agricultural practice of crop rotation and urban gentrification. Both are processes of extracting maximum capital in controlled, manipulated, and unnatural ways.

The zine has a messy black screen print on its cover, an illustration of a plantain plant. Inside, colour photographs by Terry-Dayne Beasley depict potted plants in mundane urban or interior settings. The photos echo the accompanying essay: they speak to the tension between naturally occurring life and the capital-based manipulation of life, with aloes, drab in clay pots, being drenched in intense sun through windows overlooking dirty sidewalks. They appear to be wondering “How did I get here?”

The central point of the essay is that both crop rotation and gentrification are incentivized by artificial conditions imposed by humans.

Crop rotation appears necessary because of monocultural practices — sowing crops as monoculture demands crop rotation to preserve soil quality. Turnover of communities in urban neighbourhoods is caused by manipulation of cultural capital and housing costs by developers. The essay ends with brief nods to socialist alternatives, which are not really explored, but I found the overall explanation of the analogy helpful as a critique and as a means for framing the phenomenon of gentrification and its inherent injustice. More smart zines like this, please!