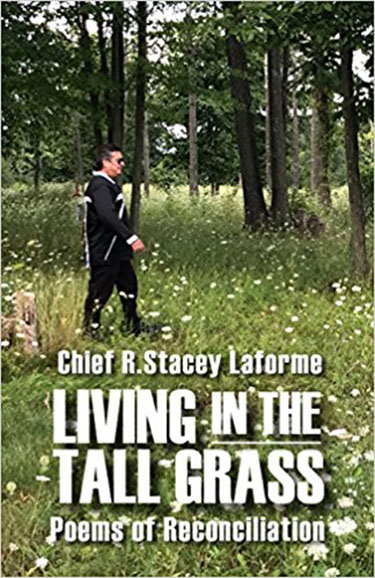 Living in the Tall Grass: Poems of Reconciliation

The sections that make up Chief R. Stacey Laforme’s newest poetry collection offer heartbreaking — and hilarious — poems about being stripped of one’s language and culture. Laforme was elected Chief of the Mississaugas of the New Credit in 2015 — a First Nation in southern Ontario — and though he barely mentions his status as a community leader, this lends gravitas to his poetry. Living in the Tall Grass: Poems of Reconciliation delves into the personal troubles Laforme has encountered, like living on the streets at 15, while examining the issues he faces as an Indigenous adult. The combination of perspectives gives Laforme a great perch from which to criticize the systemic racism in Canada he’s faced while being compassionate about the harm this has caused his own community and others.

Laforme at many instances asks what the effect of so much pain — from residential schools to ensuing problems such as drug abuse, incarceration and violence — will have on his people going forward. In the poem “From Hell to Here,” Lafrome writes “No! My people survive and learn how to cope / While there is life there is a future, there is hope.” Lines such as these are when Laforme is at his best, because they are powerful reminders of the horrors that haunt him and others daily — and his use of simple language and rhyme scheme allows the reader to focus on the subject of the poetry rather than losing them-selves in its writing technique.

“Most important let us remember we are not / enemies, nor are we adversaries,” is one of the concluding lines in the collection’s opening “Prayer.” This inclusivity is what underscores the collection for me, because he must console those who, like himself, faced systematic racism while being a leading voice in the efforts of reconciling the past with the present and future of his people.