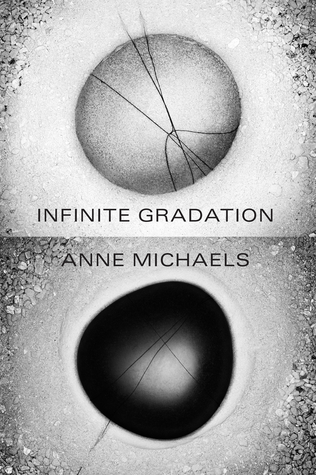 Confident that “morality is a muscle,” and that the mystery of life is better addressed by living than by knowing, Toronto poet laureate and award-winning novelist Anne Michaels has put forward a small book with enormous scope. Less a study or argument than a meditation in the midst of death, Infinite Gradation succeeds in its unique means of “plac[ing] one mystery next to another.” By composing across and between genres — including fragments of prose fiction, art criticism, philosophical aphorism, and lyric verse, all masterfully executed — Michaels allows us to dwell in her vision at the same time we are exposed to it, making Infinite Gradation both inspirational and palliative in itself.

The power of Michaels’ writing derives from its sentiment, style, and critical insight, not from research or logic.

Approached as a work of non-fiction, then, Infinite Gradation has its limitations. Michaels’s deliberations on poetry and prose, for example, despite being refreshing and often brilliant in themselves, make clear that Infinite Gradation is a book about living and writing — never one without the other. Moreover, her focus on artists deeply influenced by the events of World War II roots her ideas in a distinctly European tradition of 20th-century art making.

But even without adopting Michaels’ worldview, I found myself thoroughly and exuberantly immersed in her thought. Michaels’ voice is penetrating and compassionate, and it is a marvel to see her ideas expressed with such artistry. Meanwhile, those writers and artists (of whom I’m sure there are many) who have committed themselves wholeheartedly to Michaels’ vision will discover in Infinite Gradation an invaluable source of consolation and clarity.