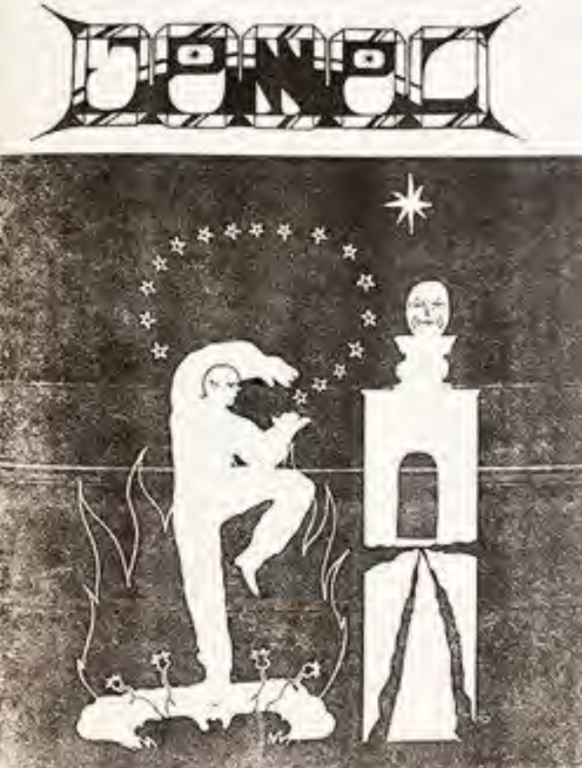 This is a straightforward zine, page after page of illustrations of figures taking various sizes and shapes, arranged into unique poses, scenes, and displays.

The eerie, druidic register of this high contrast art zine culminates on its final explanatory page. It describes the preceding images as “forged in dark, only to reflect the brightest light. Treasured by the past and future … Jewel.” It’s a fitting, if evasive thematic, as the various drawings in the zine depict figures surrounded by shadows, a strange interplay between light and dark curiously framing their bodies to add negative forms or shapes through their juxtaposition. A hand reaches for a star; a rumple shirted figure cries in front of black flames as they grasp a bouquet. A figure considers their shadow and a bouquet, while various squat and short characters engage in their artistic practices.

Jewel is drawn in a thin black line. Careful layering allows Pretty to produce standout pages with a great deal of depth and texture. There’s often a lot going on in some of the images, but it’s never difficult to make a distinction between the different elements that make up the zines’ best pages. The figures in Jewel are speculative, just approaching human, and the rich black risograph ink adds a sufficient eeriness to their various poses and displays. There’s a definite strangeness to the images that works in its favour.

Pretty’s work hits all the right notes. Forgive me the terrible pun, but Jewel is a real gem. (Graham Sigurdson)