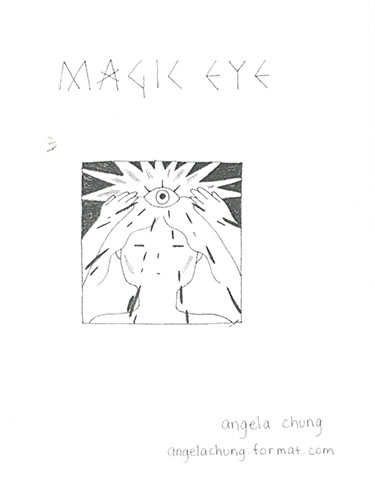 With a few exceptions, the typical comic zine adheres to a somewhat set format. While the routine of “front cover, back cover, stapled binding” will continue to have its place as the Ur-zine, it’s always nice to have something come along and upend stylistic norms. With both formal and stylistic devices, Magic Eye does this, and it does it well.

Though short at just seven pages, Magic Eye wastes no time establishing that the title is also its key narrative device. Three friends find a magic eye book — the typical kind where you unfocus your eyes to see a dolphin, rocket, or whatever — and ask that the one who can’t make out the image “look beyond.” It’s here that the form of the zine itself comes into play. With only the folds of the paper it’s printed on holding it together, the reader need only continue flipping past the supposedly last page, with the comic continuing onto the reverse. It’s a novel concept, and one that is aided by the brevity of the narrative. The interplay between medium and the story being told is seamless, and while there exists the risk of such a piece being seen only as “novelty,” it escapes that, and manages to exist as a full and deeply enjoyable work.