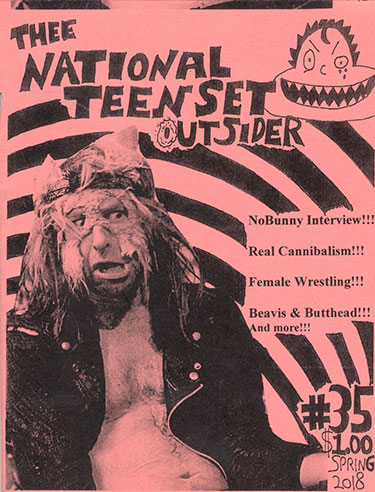 Rochester cut-and-paste punks are back with Issue 35 of this very approachable, occasionally goofy, quarter-sized gem. The National Teen Set Outsider has an old-school feeling I enjoy and, beyond the NoBunny interview, so much of this zine is a throwback: female wrestling, Beavis & Butt-Head, pizza, hillbilly music, cannibals, and a whole bunch of other weird crap. I used to know this zine as the Rochester Teen Set Outsider, but they’ve clearly gotten too big for their britches and are now mass communicating the big topics: like diabolical clowns, the occult, comic artist Al Jaffee, a backhanded obit for Billy Graham, and enough immature jokes to make your subway or waiting room experience a bit more bearable.

I am always jealous of zine editors that can corral this many weirdos together and produce something that holds up well as an organic whole. And it is impressive just how much they fit in this small zine. If a piece doesn’t land for you, there’s another one right after that is probably worth your time. The National Teen Set Outsider is insolent enough for you rebels (“The lay teachers were drippy hippie folk mass freaks, who helped drive most of my generation towards the dark and harsher sounds and themes of the metal”), heartfelt enough for you punks (“It’s easy to lose your way in the endless days of misery and bullshit”), and funny enough (“the fucking zoo animals escape after drinking water with PCP in it”) to hopefully make you put down your phone for just a second.

I kind of want to write for them.