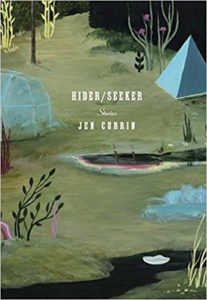 The title stories, “Hider” and “Seeker” appear at the end, so that as the reader is taken through the collection there is a sense that the characters are hiding from themselves, their anger, sexuality, or failed relationships. They seek peace in the sanctuary of cabins, spiritual books, and monasteries. (One notable recurring setting is the Kanda Monastery where a terse monk encounters and guides a few of the book’s characters.)

There’s an ongoing motif of the labyrinth in this collection, and it seems to be a metaphor for the entire piece, which covers recurring ground, circling themes of queerness, addiction, contemplation, visions, lizards, and ghosts. Despite the common threads through the stories, the characters are unique, and the perspectives vary from story to story.

Currin portrays a wide variety of queer relationships. One story that stands out is “Third Beach,” which tells the story of two ex-wives, simply referred to as “the sexy one” and “the serious one.” She reserves the reasoning for their breakup until the very end, keeping the reader in suspense as to exactly why these two people — whom the reader grows attached to despite their lack of names — didn’t work out.

In “A Snake in the Grass,” Currin explores the motif of female anger. An aunt in recovery seethes over what she views is her niece’s mistreatment. “Shannon pictured Bethany’s face laughing and she wanted to slap it. She caught herself. No. She didn’t want to slap her. Maybe she wanted to grab her shoulders and shake her a little bit. Maybe tell her very clearly and emphatically that she was wrong. But not slap her.”

If you are in the mood for poetic vignettes, nuanced portrayals of queerness, grief, memory, and relationships, this is a recommended read.