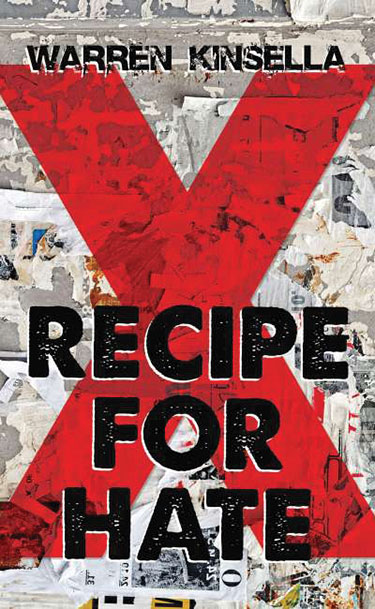 Recipe for Hate is a novel set in 1978 Portland, Maine, which is billed as a “festering crap hole by the sea.” It tells the story of the X gang, a group of high school punks living in “the suburban splendor” of South Portland, whose “bland satanic monoculture” inspires the music they create in a series of interconnected punk bands.

The book is narrated by Kurt Blank whose best friend is X: the mysterious de facto leader of the X gang. X produces an underground indie news bulletin, fights back against the “punk-hating jocks,” and considers the use of his real name too intimate. When their friends are murdered, the gang comes under attack from neo-Nazis, the establishment, and the media, leaving them with a dual-mission to save the Portland punk scene and solve the murders before they are next.

While Kinsella sets up the novel’s characters with many potentially juicy plot possibilities, such as Kurt being gay, the punks being hunted down by racist far-right zealots, and the fact that the murders are imbued with religious symbolism, he repeatedly takes the easy way out. And it fails to pack an emotional punch for the reader. The book’s character and situational development brings the novel closer to a piece of reportage than an emotionally satisfying experience.

Nevertheless, the splashes of Toronto and other places in Canada thrown into the novel give a nice touch of home. Moreover, the book does a lot to explain the early punk and indie music scene, providing the reader with interesting and poetic philosophical musings on it throughout. For example, in his bulletin, X writes, “[p]unk is about trying to scratch out some meaning in a big old world that seems pretty meaningless, most days.” While Kurt observes that “[w]e figured that no matter how much you wanted peace and love across the universe, hate and war was all that was currently available.” Thus, the novel is recommended for readers interested in the punk scene, clashes with the far right, or a teen mystery.