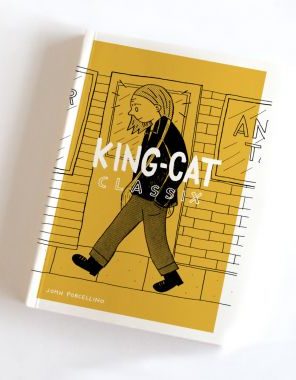 Here lies a unique portrait of Midwestern youth, reveling in the mundane. The work collected in John Porcellino’s King-Cat Classix is more than the sum of its parts — autobiographical comics and dream sequences, letters from friends, top ten lists, fictional stories. It is a veritable tome representing the best of fifty issues of his legendary zine, and with each entry reflects and refracts the changing world and cartooning culture that surrounds it. While one might be put off by the sketchy linework prevalent in the first quarter of this book, the transition to his signature minimalist style and emotionally evocative subject matter make it clear why Porcellino quickly became a monumental figure in the underground comics world. These zines are unrestrained by expectation and, while clearly influenced by Julie Doucet and Lynda Barry, in a voice undeniably his own.

King-Cat Classix is a testament to Porcellino’s growth as an artist and writer. Sometimes that requires the reader to slog through crude sequences rife with adolescent humour, but more often than not, the stories tap into specific instances of nostalgia, reveling in the easily-over-looked beauty of mundane daily life. It would be difficult to read through this collection and not pine for simpler times and close friends. At its best, it reminds the reader why life is worth living; in wonderment of the day-to-day.

These stories are considered classics and it’s easy to see why; the “All Sam” issue taps into the universal heartbreak a dog’s life (and passing) through vignettes of honest interactions, while “My Star,” a four-panel comic about a star shining through his bedroom window, celebrates the beauty of simplicity. It is in this softness that Porcellino shines, and where this collection hints that the series will go — he is still regularly self-publishing King-Cat over three decades later.

King-Cat Classix is a celebration of life in all its tenderness, sweetness, and grossness — it encourages the reader to live more earnestly, to allow space for personal growth, and to love life more deeply.