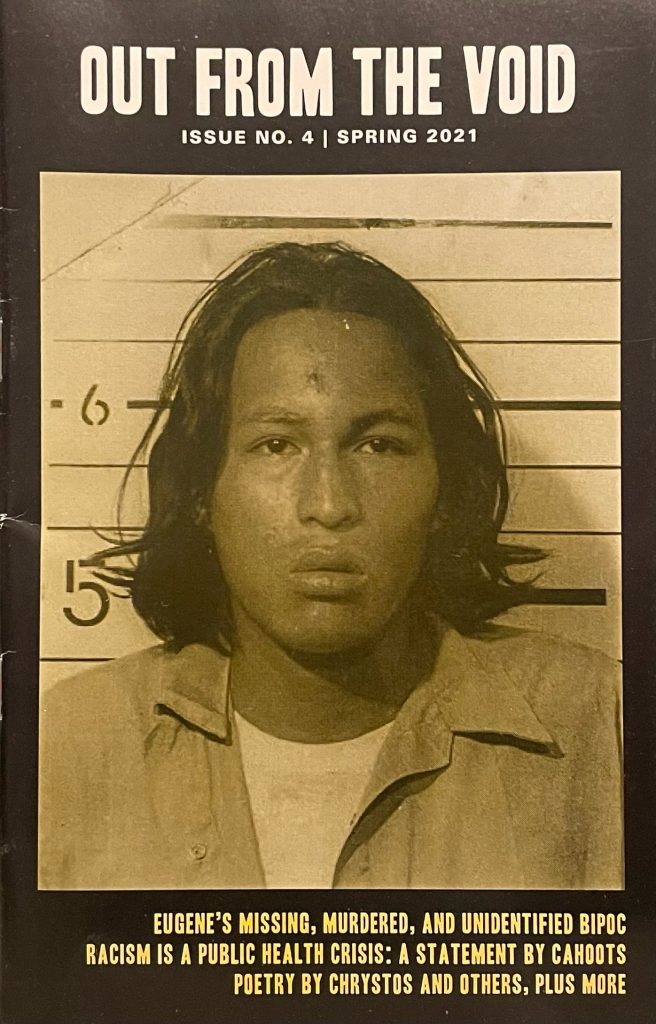 Out from the Void #4

Unassumingly described as “an eclectic mix reflecting things that are interesting and important to [him],” Brenton Gicker’s fourth issue of Out from the Void collects stories that center on marginalized, forgotten and oppressed people in and around Eugene, Oregon. Gicker is a registered nurse, a journalist, an EMT and a crisis worker — roles that, taken together, make him a witness to and testifier of crisis experiences. That’s what this issue consists of, too: writing (mostly reproduced from elsewhere) that draws attention to the individual crises of dozens of missing, murdered and abused people.

Gicker contributes some of his own work, but most are by other writers. Each selection is consistently gripping, bringing attention to important instances of human suffering and struggle. Gicker leads with his own essay on four missing, murdered and unidentified individuals from around Eugene — all BIPOC and for whose deaths no one has been held accountable. He reprints a column from a former local police officer who left the force after suffering retaliation for holding his colleagues accountable for abuse of power. Several powerful poems by Chrystos are included. An excerpt from D.J.T.’s Here’s What I’ve Hidden Under My Tongue #2 is a standout final contribution, describing the author’s teenage experiences in psychiatric hospitals.

Without a doubt, this is a heavy read, but incredibly powerful, too. There are dozens of examples here of humans who have been exploited or destroyed by other humans, which, as a collection, makes for crucial witness and testimony — important steps toward making that exploitation and destruction stop.