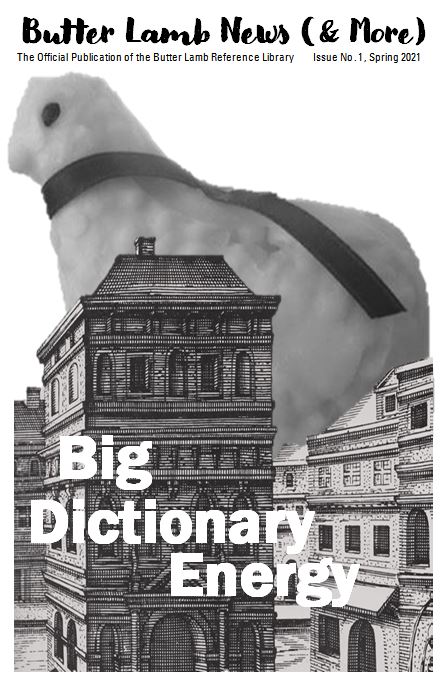 Not in bulky, dusty tomes, but in diminutive zine form, Joseph Smith presents The Butter Lamb News, “the Official Publication of the Dictionary Appreciation Society of Laurel, Maryland and the Butter Lamb Reference Library.” As stuffy as that sounds, Smith is dealing in true nerd zine territory, not in stodgy bookman bullshit.

The Butter Lamb News stakes out a delightfully bookish zine niche, championing print dictionaries over their digital conquerors, even while acknowledging the battle is lost. Still, print dictionaries, like zines, have certain characteristics that can never be replaced. In a single print volume (or several) the dictionary’s user is treated to a scope, a method, a philosophy. Not the willy-nilly definitions of whatever might rise to the top of a search engine’s algorithm. As Smith explains, lexicographers take positions when charting out what their dictionary will be and how it will do what Maryland and the Butter Lamb Reference Library.” As stuffy as that sounds, Smith is dealing in true nerd zine territory, not in stodgy bookman bullshit. The introduction makes this clear, distinguishing between the prescriptivist camp of dictionary editors and the descriptivists, or, those who define words in order to prescribe how language ought to be used versus those who give definitions that describe how words are actually used.

Lexicographers choose a lane somewhere between these two poles, and publish a wide spectrum of dictionaries. Smith does a great job of illuminating this context, making it accessible and fascinating, opening up what might otherwise seem to be a narrow subject for a zine. Smith’s zine is primarily text, with a few images like black and white reproductions of dictionary covers. It is far from boring, though.

Additional articles offer up more lexicographical nuance, like a short piece on the ethical quandaries of defining life, the ways dictionary usage statistics can reveal timely human concerns (like all the COVID-related words we’ve been looking up), how words like “cheugy” and “phubbed” make their way into definable usage. Finally, Smith includes a venerable mainstay of zines: the review section — reviewing dictionaries recently acquired for the Butter Lamb Reference Library. Smith’s writing is fun, down to earth and pretty hilarious throughout, poking fun at language and language geeks, while also embracing and celebrating the nerdiness of it all. (Joshua Barton)