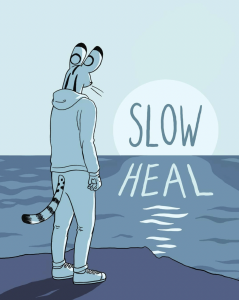 This zine, nominated in the comics category for the BP Zine Awards 2021, is described by its creator as “compilation of little autobio comics I drew to help myself feel better after a breakup.” Each page is a single panel of art, together tracing a timeline of the first six months of 2020, each difficult in its own way. Breakups are understandably tough, and Tobias sets out to “metabolize what I was feeling,” noting that “these comics are a record of my gradual healing process.” Tobias covers many of the phases one might go through following a serious breakup: the surreal intangibility of change, the feelings in the aftermath, the longing for those more physical moments, and the inconsistent and unpredictable waves of emotions. These give way to internal reflection, which finally gives way to more realistic expectations. Maybe you’ll never see your ex again. Maybe that’s ok. Tobias depicts the events in Slow Healwith anthropomorphic animals. The author is a serval (a sort of leopard that shrunk in a washing machine) and their ex is a fox. It’s ‘cartoony,’ but it’s never in disservice to the weighty subject matter. Tobias manages to pull an impressive number of emotions out of a feline shaped mouth. Breakups hurt. But they can also be positive forces for change. I hope Tobias is feeling better, and if Slow Healis any indication, they’ve got some strong work ahead of them.