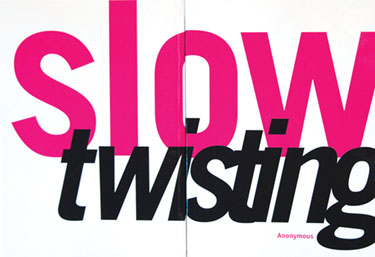 Though teen sex, drugs, and a brush with death offer plenty of voyeuristic pleasure in this anonymous novella, Slow Twisting is not as provocative a book as it clearly wants to be.

Opening with a single scene of public fellatio retold from the successive perspectives of its various young protagonists, the book does its best to under-line exactly how shocking we ought to find it. Slow Twisting parades all manner of bad behaviour before the reader. But it also never fails to recount the correction which follows: from T, who fights with his friend J after the latter exposes himself at a club, through to the step-parents of C, who threaten their ward with violence when he and his half-sister are discovered in flagrante delicto. The succession of comeuppances finally culminates in a literal earthquake, which, in the wake of C’s incest, theft, and flight to Europe, prompts some shallow reflection in the minds of the teens. Slow Twisting is not an account of depravities, but of depravities punished — a conservative story structure, masquerading as risqué.

Post-earthquake, C’s sister M monologues broadly about the meaning of life, asking “What is someone to do?” Laden with references to Voltaire’s Candide, the explicit Big Questions in Slow Twisting are a clear satire of a certain type of adolescent philosophizing; but whether this is biting or simply facile depends on the reader’s generosity. But while publisher Impulse(b:), in their announcement for the work, evokes the idea that in some circles “the book may be considered pornography,” it includes little that would surprise regular readers of contemporary fiction. Slow Twisting is an enjoyable, quick read, but far from a succès de scandale.