Stare Down game zine combines fun with endurance and zines 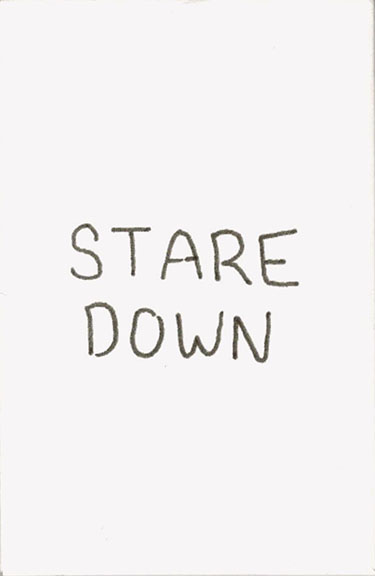 I didn’t even think BP reviewed games. But here were are, and we’re talking Stare Down, a new game, sold as a zine I guess, that combines cards and endurance and focus, amongst other stuff. The game itself is easy to play. There’s a deck of two dozen or so cards, each approximately the size of a business card. On every card is a pair of eyes. All the eyes are open, except on one card where they’re closed. You flip cards, making (fake) eye contact without blinking until the closed eyes reveal themselves. It seems easy but it’s actually fairly challenging. Personally, the flipping of cards makes me want to blink as if the cards are delivering a non-verbal “time to blink, dude!” instruction. I guess that’s the point. This is largely a solo game, but creator Nick Loewen says pairs can play by taking turns flipping or, ever better, “just stare at each other.” Stare Down is a good concept, an easy game to play, and perhaps a micro-statement about the simple stasis that can still be enjoyed in the absence of iPhones and the internt and the like. All told, Stare Down is fun whether you’re staring at 2D and 3D eyes. Even more fun if you have a Visine chaser at the ready!