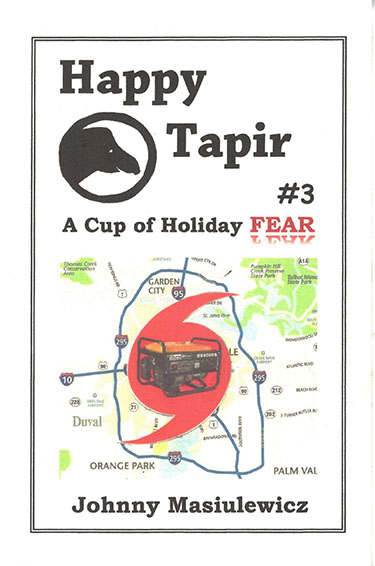 I have never been blessed nor cursed with a recurring dream. I imagine, in my cynical nature, that it’s usually more of a bur-den than a perk: the same details, over and over, uncontrollable, like a persistent visiting ghost.

And if one is given to finding predictive connections between dreams and reality, the recurring dream must seem like an awfully redundant prophecy.

Johnny Masiulewicz’s latest issue of Happy Tapir begins with his terrifying recurring dream of being swept up in a tornado, which he credits to a close-up childhood experience with a tornado in his former Chicago neighbourhood. Now living in Jacksonville, FL, where hurricanes are usually nearby but haven’t made a direct hit since 1964, his dream takes on a new hue. The fear Johnny experiences from tornadoes in his sleep is rooted in his real-life experience, while given the long-standing luck of Jacksonville in escaping the damage of direct landfall of a hurricane, Johnny calculates that the vast majority of his neighbours have never actually experienced the terror of being in the depths of nature’s fury. And yet, as Johnny puts it, this is also the home of the hurricane season “holiday,” a socio-cultural obsession with hurricane-induced fear; a manipulation of would-be hurricane survivors’ risk aversion to compel citizenry to stock up on window boarding, toilet paper and generators; TV meteorologists with fever dreams of standing before the camera surviving the eye of the storm for a live audience.

Johnny’s comparative analysis of his own dreamy storm fears, and the manufactured fear he sees around him, is illuminating reading. He takes a dive into the unconscious to suss out a deep, inherently human fear from one that is implanted in people by others.My only critique is the tension between Johnny’s well-crafted trip into psychic terrors and the generic, word-processed presentation. He makes some clever use of images, but they are presented unremarkably. Basically, there isn’t much development of visual aesthetic on display, and the resulting blandness is jar-ring against the richness of the text. Nevertheless, I like this and would come back for more.