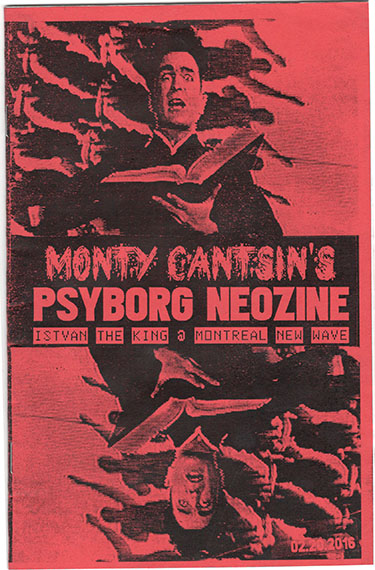 It’s not entirely clear who’s responsible for the content in this publication, but that’s in keeping with the spirit of Neoism, the movement it promotes.

Neoism is a multi-faceted philosophy that, in part, covers a form of artistic expression, performance, and experimentation that utilizes shared pseudonyms and identities, pranks, plagiarism and fakes. A concrete definition of Neoist beliefs is elusive — it’s proponents seek to skirt categorization. Istvan Kantor, a well-known figure in the movement, is likely responsible for this text, with Neal Armstrong editing or distributing. Monty Cantsin — an oft-used Neoist shared identity — is credited alongside Kantor, but it’s not clear if that denotes the real involvement of a third party.

Monty Cantsin’s Psyborg Neozine appears to be a program — or souvenir, or manifesto — from the afterparty of the premier of Montreal New Wave, a documentary by Érik Cimon. It’s a mixed bag of collages, essays and slogans (“We declare that from tonight onwards hunger is the mother of beauty”), as well as poems that work as companion pieces to the film’s subject (underground music in Montreal in the 1980s): “covered by the transparent body of the 80s / by the transparent hole of the bloody abyss / of the void of the nothing of the emptiness / of the 80s.” It isn’t a far cry from an issue of Adbusters. It’s at times absurdist — “After the second World War, some of the Nazis escaped to the Secret Planet… they bought your soul from the Earth Powers” — but always resolute.

This zine alone won’t be enough to coax someone aboard the Neoism train — you had to be there. It’s a stimulating read, though.