The Case of the Missing Men has something for everyone! 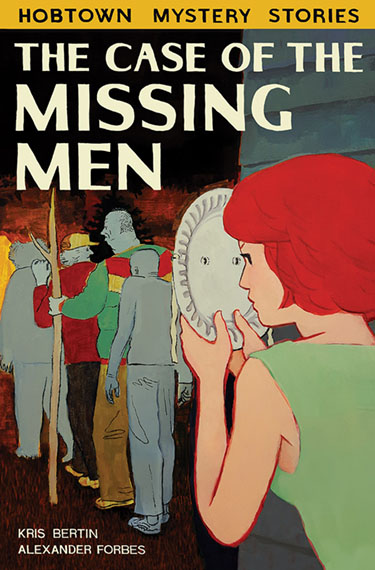 The Case of the Missing Men

In Hobtown, Nova Scotia, population 2,000, something strange is happening. Over the course of a year, six men have gone missing under mysterious circumstances — including the father of Hobtown’s newest arrival, boy genius Sam Finch — but nobody seems to want to talk about it… except for the members of the Teen Detective Club (a registered after-school program).

The debut graphic novel from writer Kris Bertin and illustrator Alexander Forbes is funny, eerie, weird, and riveting in equal measure. It’s difficult to praise The Case of the Missing Men too highly; there’s something for everyone here. Bertin’s background as a literary writer shows — the plot is complex and defies easy answers, always subverting expectations and conventions to keep readers invested. The script draws on the spirit of old children’s pulp classics, like Nancy Drew or The Hardy Boys, but never succumbs to the easy, tired meta-irony readers may expect.

Meanwhile, Forbes’ art features clear, careful linework that nails sweeping panoramas of Nova Scotian land-scapes just as deftly as it does action shots of motorcycles being driven off balconies. Forbes’ versatility is uncanny, and his ability to take the tone of a scene from placid to foreboding at the drop of a deerstalker cap brings Hobtown and its cast of residents to life.

The Case of the Missing Men is listed as the first in the Hobtown Mysteries Stories series, and although it’s hard to tell whether further chapters are a serious plan or not, readers will find themselves hoping that Forbes and Bertin have more cases for their teenage detectives to solve. It’s rare that a creative team produces such impressive work right out of the gate, so one can only assume that things will get even better from here.