The Vent 2.0 prison zine is harsh, heartbreaking, and joyful all at once 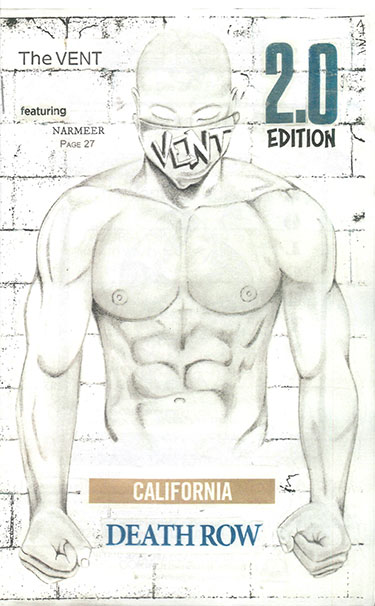 The 13th Amendment to the US Constitution says “Neither slavery nor involuntary servitude, except as a punishment for crime whereof the party shall have been duly convicted, shall exist within the United States,” and it is one of the social obscenities of our time. It’s hard to wrap your head around the fact that a country that comprises 4.4% of the world’s population houses around 22% of the world’s prisoners.

Technically most prisoners are guaranteed the right to access some level of educational programming. Despite institutional resistance towards actually making that access a reality (as the recent prison strike indicates, they’d much rather enlist prisoners in labour that pays them mere pennies), super resilient writers, artists, and activists on the inside have been able to sustain a surprisingly vibrant zine publishing culture. I’ve read prison zines before but never one so timely.

The VENT, in reference to the air vent in a prison cell, is the platform that delivers poetry, rap, and political commentary to a rapt, incarcerated audience every night, reverberated through an air duct. The zine strikes a jubilant tone at the outset, “no busters allowed clause in full effect” but the subject matter is harsh, the delivery is colourful, and the level of enthusiasm is through the roof. Most of the material in The VENT takes the form of written raps that range from dense metaphysical agitprop to more straightforward gangsta rap with Onyx-level bloodlust. So much of it speaks directly to our time.

On Black Jewelz, B.G. (Demetrius Howard) brings Chuck D or Paris to mind with his dense verse, “howcan [sic] I not cry after what I saw on world news, couldn’t even hide or deny a world of hate and war against us, where our place beyond the basketball court or football field, entertaining you.” My inner rap dad was duly head nodding.

There’s a pretty strong macho vibe that runs through the whole thing. Affectionate line drawings give a face to the written verses. The VENT touts its “grimey consciousness,” and this issue includes references to police slayings, the undermining of DACA, and other manifestations of systematic discrimination, all the while managing to be harsh, heartbreaking, and joyful all at once.