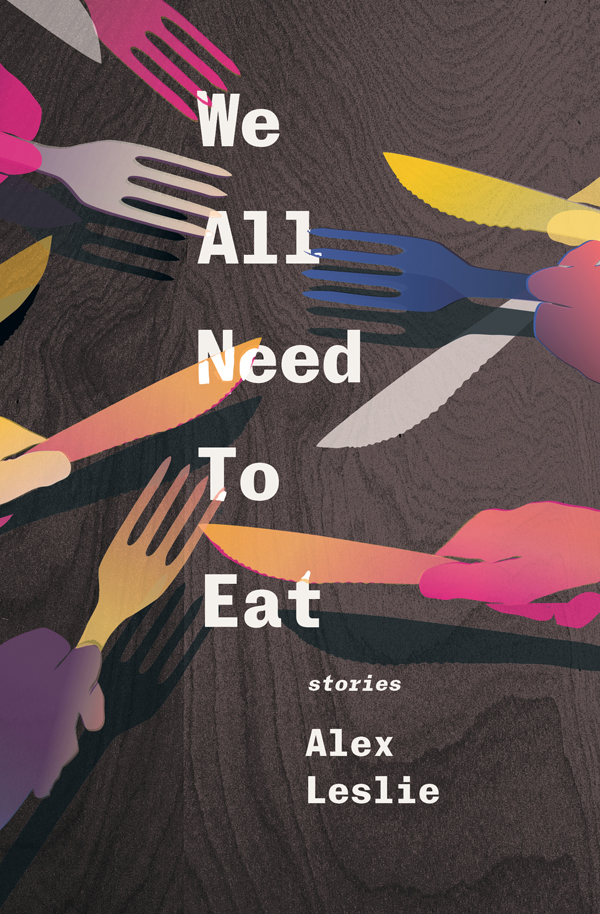 We All Need to Eat
Alex Leslie, Book*hug, bookthug.ca, $20

We All Need to Eat is a collection of nine linked short stories following the life and family of Soma, a queer woman in Vancouver, ranging in time between Soma’s childhood through to her adulthood. Leslie’s stories are a process of enfolding. Covering weightlifting, suicide, Jewish identity, queerness, and more, the collection’s stories connect through recurring characters and places, and imbued with repetitions such as the phrase and ways in which “People are people are people.”

The book contains a clear reverence for elders and those who have passed before her, and unpacks Soma’s relationships to mourning, loss, and mental illness with her brother, current day ex-partner, mother, and friend who commits suicide.

Two themes resonate throughout the book. The first is Soma’s father’s saying that “If anything terrible happens, treat yourself to a nice meal,” which plays out in Soma’s connection to food preparation as a Subway sandwich artist and cooking. The second, Leslie’s exploration of the Ashkenzai tradition of naming a child, which involves “tak[ing] the initials of their dead relative and us[ing] them again and again so that the letters are never lost.”

A stand-out story is “Who You Start With is Who You Finish With,” which juxtaposes Soma’s story with her grandmother, Charna’s, when she was Soma’s age. Charna, having made it safely to Canada from Ukraine, looks at how her shul is affected by the developing Holocaust, and the repercussions she suffers because of her choice to marry a non- Jew. Meanwhile, Soma mourns Charna on the fifth yahrzeit, or anniversary of her death. She realizes she has booked a vacation with her partner during the yahrzeit and has to deal with the mourning rites and her partner, all while obsessing over media coverage of the alt right’s rise in our time.

Leslie’s prose is fluid, occasionally leaving this reader lightheaded. Nearly each story feels like a narrative experiment, and at times the narrative is overtaken by her interest in breathless lyricism. Leslie’s weaving of the stories deepens the reader’s understanding and interest in Soma with each story, leaving one full.