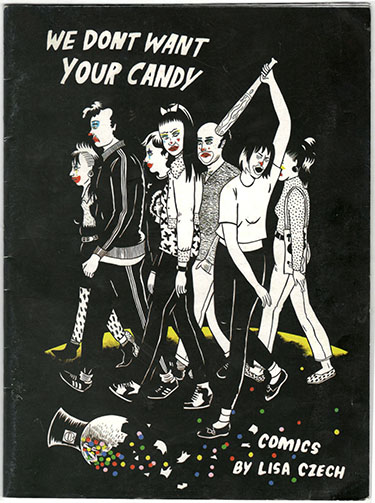 We Don’t Want Your Candy

A lot of these comics are about being an angry and contrarian woman finding innovative ways to deal with harassment and heartbreak, so I found it personally very relatable. I would hate to actually burst into flames on the Montreal Metro, especially if it meant ruining a rad outfit on the way to a costume party, but I think it would be a fun power to be able to unleash at will. And imagine if the next time a strange man grabs you on the street you could trigger your skin to secrete a sticky poison, like that one dinosaur from Jurassic Park who killed Newman from Seinfeld. That’d learn ‘em.

Most of Lisa’s comics are in English, but some are in Spanish and she provides helpful translations for both English and Spanish-speaking readers. The text on its own at the front and back of the comic reads like fragmented poetry, and I liked reading the English translation in its entirety at the back of the comic and then flipping forward to mentally match it up with the pictures.