While well researched, Unsettling the Commons can be unsympathetic at times 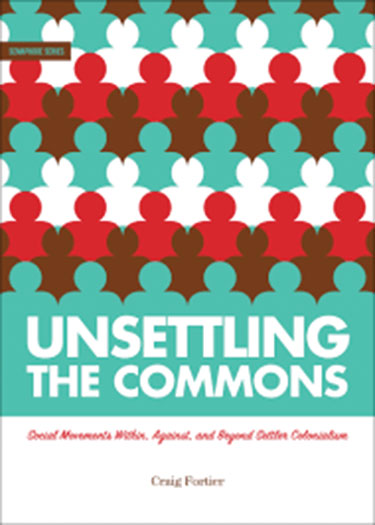 Unsettling the Commons: Social Movements Within, Against, and Beyond Settler Colonialism

In keeping with previous entries to ARP Books’ Semaphor Series, Craig Fortier’s newest publication is more of a position-piece or extended essay on the relationship between the Western “commons” tradition and its counterpart in many Indigenous North American ways of seeing. Having conducted 51 interviews in 2013 and 2014, Fortier uses many activist voices to call into question the settler activist’s call to “reclaim” the land. Western social justice movements of all stripes have had long, complicated, and often hostile relationships with Indigenous sovereignty struggles, and Fortier’s text aims to re-centre social justice at large around a relationship with decolonization and Indigenous leadership. “The focus should be on movements that leave open possibilities for interconnections,” he paraphrases Cleve Higgins, “between prison abolition, anti-imperial-ism, gender liberation, disability justice, migrant justice, and a number of other struggles, all of which should acknowledge the centrality of Indigenous decolonization.”

Even this brief summary, though, starts to identify some of Unsettling the Commons’s shortcomings. Clocking in at 108 small pages sans-citations, the main thrust of Fortier’s argument really bites off more than it can chew. Is it enough to simply mention prison abolition, anti-imperialism, gender liberation, disability justice, and migrant justice struggles offhand, and to simply conclude — without development of these issues and their relationship to colonization — that all should acknowledge the centrality of decolonization? I appreciate the power of Fortier’s research and rhetoric, but struggle to see how this style of argument can’t be turned on its head, so the decolonization activist is then asked to recognize the centrality of the prison liberation, etc., struggle. Fortier, so well-aware of the disastrous effects of social justice in-fighting seems to have been forced by limited space into dis-missive maneuvers that might encourage it. An excellent, well-researched argument — but I worry it is sometimes unsympathetic to its audience.