Wrestling with Colonialism on Steroids contextualizes and broadens our understanding 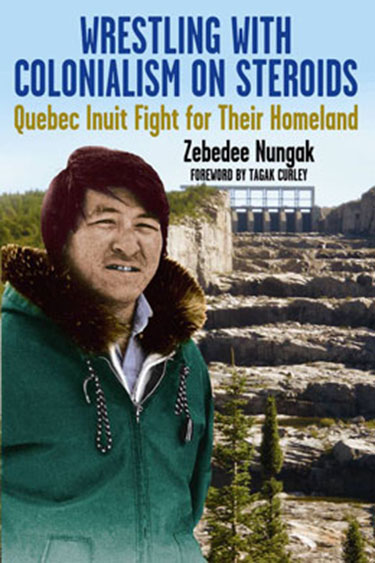 Wrestling with Colonialism on Steroids: Quebec Inuit Fight for Their Homeland

Largely an unspoken story of 20th-century postcolonial Canada, the Battle of James Bay was a major flash-point in Indigenous-settler relations — especially as that relationship pertained to a French-Canadian nationalism spurred on by the Quiet Revolution.

Zebedee Nungak, in this concise recollection of the years 1971 to 1975, relates his personal experience in fighting the James Bay Hydro Project along-side other central Inuit figures from Northern Quebec.

“The political lay of the land was decidedly hostile to the Cree and Inuit,” he writes. In the face of a system which acknowledged them only to survey the land upon which they lived, Nungak describes the Quebec Inuit carving out new precedents in negotiation, while being forced to make terrible sacrifices that remain contentious today.

Nungak’s personal experience of the political climate makes up the core of Wrestling with Colonialism’s narrative, though he makes sure to broaden out the implications of every memory with short essays that contextualize the period, figures, and powers that be for unfamiliar readers. His voice is that of lived-experience.

Rather than attempting any kind of historical omniscience-qua-retrospective, Nungak admits what he does not know, and while he justifies the more difficult resolutions he and his companions were forced to accept, he similarly admits that it is impossible to know what was the correct decision, and if other possible universes could not have been more favourable today, half a century later.

“The men who signed on to the Agreement endured withering ridicule from their own people for doing so,” he writes. They “turn[ed] relationships among Inuit in Nunavik into a psychological and emotional war zone.”

With these divisions persisting today, it is clear that Nungak’s story, and those like it, are necessary reads for the 2018 Canadian.