You could say it was all Ken Burns’ fault, enough people did, but that’s only a half-truth. The fault was collective, global. We all deserve a piece of it.

It started with Tau Ceti e. Some enterprising marketing guy from the company that bought the rights to the Ken Burns documentaries decided it would be a great idea to launch them into space. More specifically, the company would pay for a Voyager-style craft that would be loaded up with the entire Ken Burns oeuvre and blasted in the direction of one of the nearest habitable exoplanets. This was Tau Ceti e, an Earth-like world in the Goldilocks zone orbiting a yellow dwarf star 12 light years away. The shtick was these Tau Ceti aliens would one day receive the craft and be educated in American history the PBS way.

Of course, the whole thing was just to attract attention for the limited edition Blu-ray set. No one expected aliens to ever view the films. Science said the Tau Ceti planet was unlikely to support intelligent life, and that it was possible it didn’t even exist. Its presence was inferred from a gravitational wobble in its star – no one had actually seen it.

But the stunt hit a nerve with some people, chiefly Russian people, who said to themselves (in Russian) who the hell is this Ken Burns guy, and why does he and his history of America get to represent the world to the rest of the galaxy? What about all the superlative achievements of the Russian people? The bear’s proud yet tortured past? What about the Bolshoi? What about Tolstoy? What about Sputnik and the defeat of Nazism? Shouldn’t Russia have a Ken Burns rocket too? Well, of course, Putin said da. He even piloted the launch craft into near-orbit himself before bailing out, topless, and rending Old Glory in two with his bare hands.

But then the Ukrainians took issue with the Russian films’ attitude to Crimea, and the Visegrad Four had similar beef with the Kremlin’s depiction of the glories of Soviet subjugation. So soon enough there were other documentaries being made and other spaceships being planned, all targeted at distant ‘habitable’ planets we didn’t even know for sure existed. Turkey recast the loss of its Ottoman possessions as a heroic throwing off of foreign shackles, and completely forgot to mention the 1917 genocide. That meant Armenia had to do a Ken Burns too, and the envious Greeks blew all their EU bailout money on a rocket to Kapteyn B.

But what really kicked things off was Great Britain’s effort. Prime Minister Cameron asked Richard Curtis to direct, and he produced eight hours of kings, castles, crowns and cockneys – how the UK gave the world democracy, law, the steam train, Harry Potter – and nothing else. Cor blimey guv’nor, the rest of the world said.

That’s a crock of shit.

A lot of old wounds were reopened as each country sent its message in a bottle out into space, but after it was all finished, the strangest thing happened. The rancour that had split nations and peoples dissipated, the sudden outpouring of anger and frustration, and its crystallisation in the form of the void-bound films, seemed to draw the bitterness from all wounds. A new era of global friendship and cooperation followed. India and Pakistan reached a power-sharing deal over Kashmir, Turkey helped the Kurds create their own country in northern Iraq, the Israelis and the Palestinians created a new, joint state called – with full cognisance of the pun – Israstine. The human race bloomed like it had never bloomed before, working together through a renascent UN to tackle poverty, disease and global warming. Soon, humankind reached for the stars, establishing bases on the Moon, Mars, Europa, and designing vessels ready for interstellar travel.

We had forgotten about our previous dreams of aliens making everything right. But they hadn’t forgotten us.

The first ship arrived in 2350 CE – a hulking, hive-shaped craft the size of Phobos. These were the Tau, an insectoid people from Tau Ceti e. Refugees from a galactic conflict with the bird-like Kapteynians, they had come to seek the protection and counsel of the glorious nation of America, confident that such a successful and bullish people would offer them shelter from their enemies. The speech the Tau leader gave was embarrassing for the White House, given how unaware the insectoid president seemed of the existence of other nations. They presented the Americans with the Ken Burns ship sent out centuries before, cratered with asteroid strikes and dulled by time, but now sealed in an egg-shaped vacuum pod to be preserved forever – a holy relic.

The highly evolved dinosaurs of Kepler 186f were next, landing with a claw-shaped scout ship in Red Square. They had a somewhat different take on world history, and had come to offer the Kremlin whatever assistance they needed in defeating the evil empire of the United States. They had never met the Tau before, but the hostility was instant. The two races locked their mother ships into geostationary orbits above their chosen human capitals. Successive Russo-American delegations did nothing to break the deadlock.

Next came the cat people of Gliese 581g, on a holy mission to meet the legendary people of India, and the eel-folk of Gliese 667c, recipients of the Pakistani films and already the felines’ sworn enemies. The sentient super-amoebae of Kepler 22b sided with Israel in that long-forgotten conflict, and arrived with an intelligent pathogen designed to wipe out any person of Arabian extraction. The immaterial ghost people of HD 40307g, the space-faring algae collective of HD85512b, the humanoid robots of Gliese 581d. They all arrived with images of Earth in their mind(s) – a holy place, the secret of a mystery that had haunted their civilisations for centuries. Humanity, it seemed, was the only species in the galaxy to have developed the idea of the documentary film.

This great diversity of galactic life sat atop the earth’s orbit like a second mantel, pointing their highly advanced weapons at each other and threatening all-out war at any moment. It was all the UN could do to keep the peace. And then the Kapteynians arrived.

A brutal, war-like people, the avian empire had captured a full quarter of the galaxy with the force of their plasma weapons. Their mothership was painted with the Union Jack, but the highly trained xeno-diplomats sent out to meet them from London never made it beyond the orbit of the moon. The Kapteynians opened fire on the Tau hive-ship, and the galactic war began.

In the centuries that followed, humanity looked out from its tiny corner of the universe as all around it entire civilisations were wiped out, trillions of lives of the most intense and amazing variety lost to the cosmic conflict. More diplomatic missions were sent, but none returned. In a last, desperate act, the UN put together a new film – a complete and utterly unbiased retelling of world history that the entire globe collaborated on. It was the most beautiful thing the human race ever created, and no one watched a second of it.

In a moment of desperation, the Tau detonated an experimental weapon they hoped would win the war – a singularity bomb, an explosive so powerful it would create a temporary super-massive black hole wherever it was directed. But it spiralled out of control, and slowly it began to draw everything around it towards its event horizon, like someone had pulled the plug on the universe. Nothing could escape its gravity – not the Kapteynian fleet it was directed against, not the Tau cruiser that had dropped it, not the planets orbiting the star 10 astronomical units away, not the star itself, nor the nearby stars in the cluster, nor the Crab Nebula that enveloped it. The Earth was pulled from its orbit, the sun stripped of its gases, and as the universe collapsed in on itself the human race could only watch, and do the one thing it was always best at – blame someone else, blame its neighbours, and blame Ken Burns. Ken Burns, the destroyer of worlds. 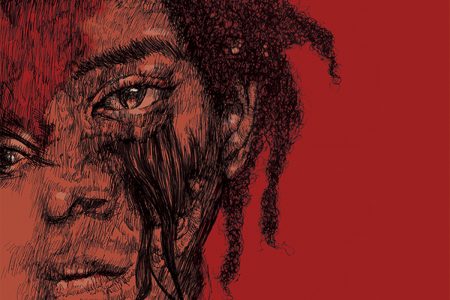