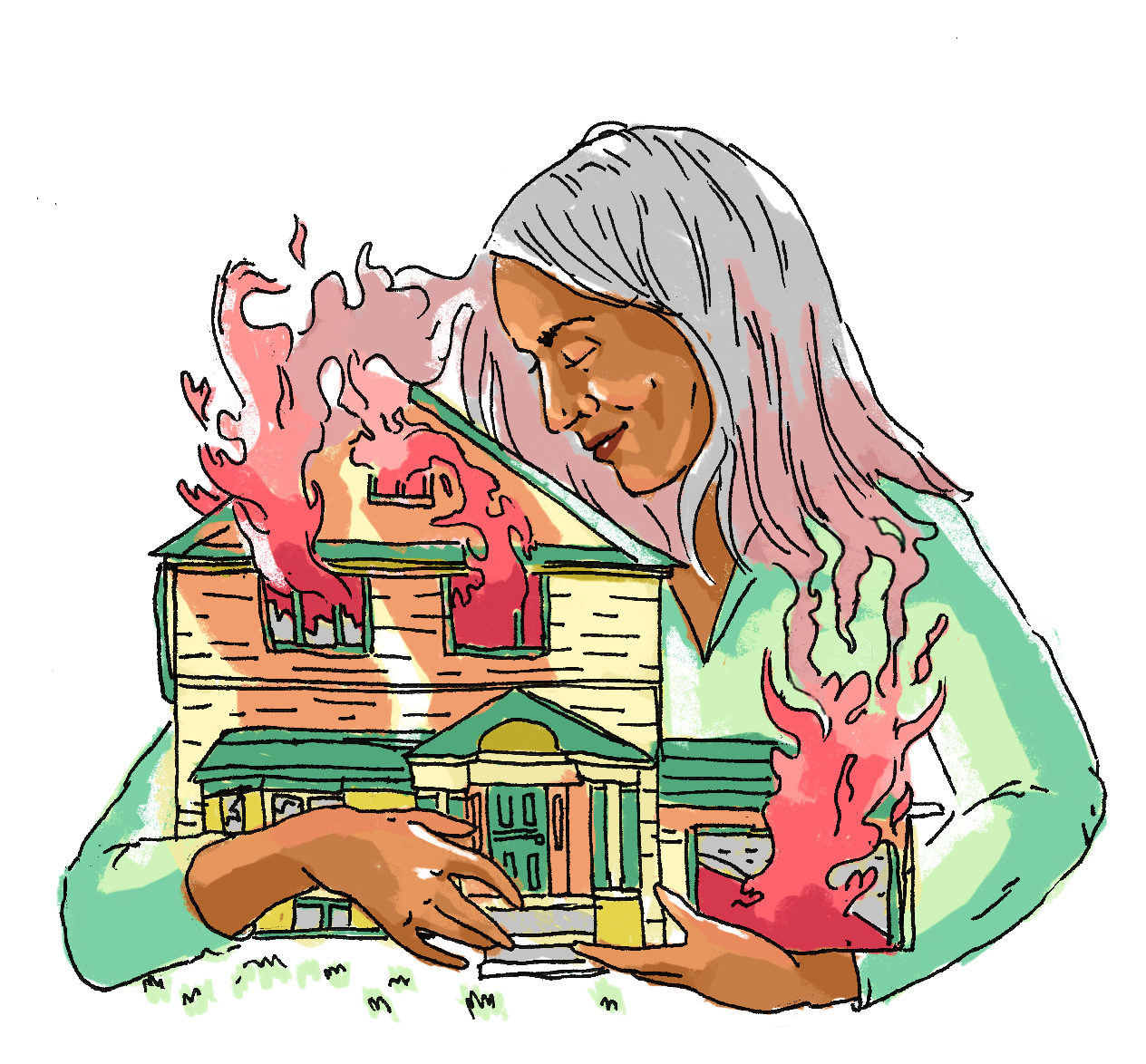 THE HOUSE STILL remembered its mother. She was one of the last living dryads in Northern California. Once a part of a huge community of magical beings, she knew she wouldn’t last long in this world. As she began to fade, she infused with magic the resin of one, tall beloved tree. Through the unloading of this tree at the lumber mill, the same magic moved into machine operators, and forklift drivers. The wood of this one tree was kept together until the bundles found their way to the lumber yard. One day a contractor arrived and told the yard man, “those bundles over there, that’s good wood, I’ll take those for the new house I’m working on”.

He was a kindly contractor, who never said it out loud, but he respected the old forest magic; he treated wood as a precious thing and only cut what he needed and did all he could to honor the wood by his craftsmanship. The house was proud of how it looked and considered the contractor as their father. Even though the house was made of more than just ancient magical wood, all of it, the cement, wiring and siding, even the paint became endued with that same ancient magic of the woods. The house was a living being.

A young family with a small child bought the house. It was happy to be of use to the people. They kept up the yard, and decorated for Christmas by setting up twinkle lights outside. They put pink flamingos in the front yard. Only the child knew the house was alive. The child drew a picture on the wall of their bedroom in crayon. It was of the child and the house together with green grass and sunshine. When the house saw that, they loved the child as if it were their own. The house talked to the child and the child listened patiently to that slow language that houses speak; the creaking, clicks, unknown breezes and the almost inaudible vibrations a house makes but are ignored by most who live inside. The adults never paid much attention to the child and even less to the house. They simply thought the child had a vivid imagination.

After a year, the house noticed something changed. The man stopped leaving in the mornings and coming back in the evenings. His truck stayed in the driveway most days. He spent most of his days sitting in the dark, cool basement, drinking from cold, brown bottles. When the woman and child came home the man spoke  harshly to them. The man and woman fought all the time, yelling and screaming at each other until one night, the man grew tired. He hit her in the mouth to shut her up. The rest of those nights would be quiet except for the soft crying of the woman and the man snoring loudly on the couch in the basement. This went on for a long time and the house was grieved to see this done inside its walls.

One afternoon when the woman wasn’t home, the man yelled at the child, and punished them for the sort of simple mistake children make. In anger, he hit the child with his open hand until the child fled to their room, weeping bitterly as dark bruises appeared on their body. The child closed the door, hiding inside the closet door, behind winter jackets on hangers.

Several minutes later the man followed the child into their room to punish them again for some other trivial offense, but when he tried opening  the door, it wouldn’t budge. The knob turned but the door was stuck firm. The man kicked and punched the door, threw his body against it, but the door had become hard as stone. The man cursed, retreating to his dark basement and his cold brown bottles, eventually falling asleep.

The house spoke to the child, “You and the woman must leave now. The man will kill you both, and I cannot allow that to happen under my branches. Pack your things. Tell the woman what happened. Don’t tell her what I have told you. Tell her you’re scared, show her the bruises.  Tell her you want to stay somewhere else.” The child promised that they would do what the house asked.

When the woman returned, the child met her at the door, telling her what the house told them to say. The woman saw the bruises and agreed. As she grabbed some things from her room, the man heard it and woke up. He jumped up to run up the stairs. He wanted to talk to the woman and tell her why he had punished the child and ask her where the hell she had been for so long. As he came to the top of the stairs, the door slammed in his face, knocking him down the stairs. The woman and the child fled the house, leaving in the woman’s car to somewhere safe.

The house watched them drive out of sight then watched the man struggle to his feet. He cursed and screamed as loud as he could; calling the woman and child horrible names and cursing any god, deity or holy thing he could think of. He seemed to be talking to no one in particular, explaining how the world had always treated him wrong, how he never got a break. He was never treated the way a man should be treated; no one respected him, not his parents, not his teachers, not the supervisors at the factory where he used to work, and especially not that whore of a woman or that brat of a kid who probably wasn’t even his.

The man climbed the stairs again, trying to break the door down. He threatened everything he would do to the woman and the child, how they’d never be safe again. They’d be sorry they had ever disrespected him.

He finally stopped pounding and sat on the stairs, seeming to soften, saying all he wanted to be was a good husband and father, you know, provide for his family. But they treated him like this when he needed their support the most. He just needed a little time to get back on his feet, and he’d get another job.

The house’s mother had taught them that every life is sacred, that every living thing contains a seed of the divine, but that selfishness could keep that seed from blooming properly, could warp it into something ugly. Evil, she told him, was always the end result of selfishness. Remembering her teaching, the house listened carefully to everything the man said. After he explained everything that had brought him to this point, he wept bitterly for a long time and then was quiet as he sat on the stairs.

Finally, the man rose to his feet and was calm again. Wiping his eyes, he vowed he’d show the woman and child what real pain was once he caught up to them. They didn’t deserve to live after what they had done to him. The man got another brown bottle from the refrigerator, sat down on the couch, considering how he would accomplish this as he drank. He began to smile at the thought of it.

The house was distraught at what they had heard. It had hoped to hear sorrow, evidence of a broken heart, even a desire to understand why life had turned out badly, instead all the house heard was blind rage, hatred and self-justification. The house heard no proof of a divine seed in the man, no humility, no regard for anyone besides himself. Several hours went by, and then reluctantly, the house decided what had to be done.

A loud creaking began all throughout the house as things began to move on their own. When the man heard this, he leapt from the couch and tried again to get out the door at the top of the stairs. As he pounded on the door the staircase collapsed almost instantly, covering him in rubble. From under the rubble he could see the closet where the water heater was stored. The closet popped open and the water heater began to shake violently, finally falling onto the ground, flooding the floor with water and bursting the gas pipe in the process. The man tried to crawl from under the rubble but the wood of the staircase actively held him, the two by fours twisting like tentacles, locking him in their grasp no matter how he struggled.

As the smell of gas became stronger and stronger, a portion of a wall in the basement came loose and fell into the water on the floor. An electrical receptacle broke free of the wall, wires still attached. The insulated wires moving on their own, separating from the receptacle, plunged into the water on the floor, causing the spark that ignited the natural gas fumes.

As the fire spread, the wood in the trusses and the interior frame shifted into a pyramid shape, leaving just enough air flow to fuel a fire burning hot and fast, before anyone could do anything to stop it.

The fire rose high into the sky and the fire department was called. As the sirens approached, the house made one last push, shifting a large part of the garage onto the man’s truck, covering it in a huge pile of flaming debris, the weight of it bending and piercing steel. Just as the fire trucks arrived, the truck exploded in a fireball. Between the explosion of the truck and the natural gas fueled house fire, just containing the fire from spreading to adjacent houses became the firefighter’s priority in the end.

As the last parts of wood in the house were devoured by the flames, the house knew their mother would be proud of them. They had valued others, sacrificing themselves to save those they loved from evil. A final stream of curly smoke rose skyward as the house died, content in knowing the child and woman would be safe. 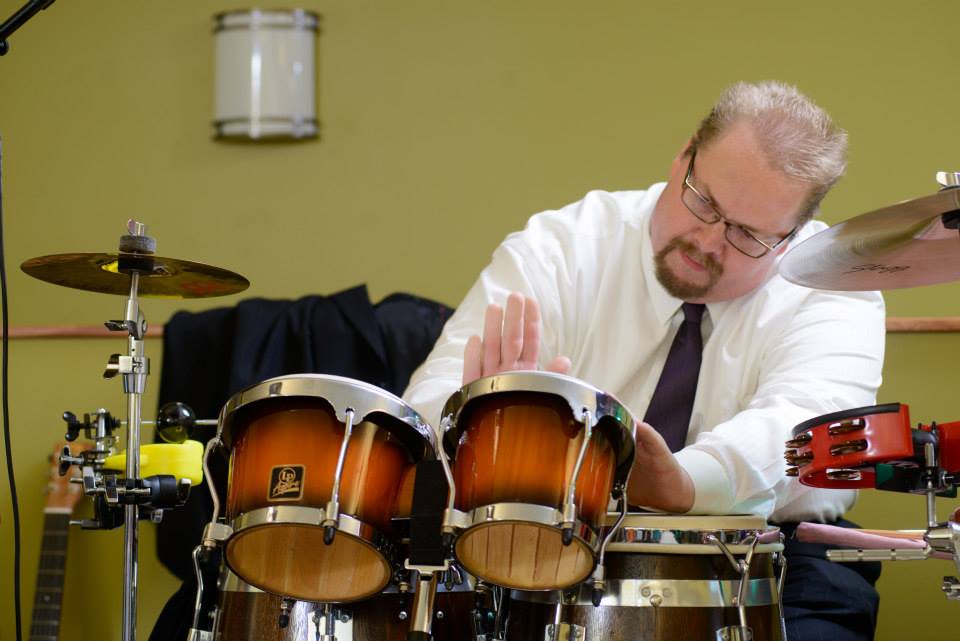 John Homan spent his early summers working with his father who was a general contractor in the Pacific Northwest. He remembers watching logging trucks being unloaded at the mill, and hiking and camping in the Cascades Mountains of Bend, Oregon. As a crossing guard at Kenwood Elementary John loved it when the logging trucks would blow their air horns as he made the fist pumping gesture all the kids knew.

He is a graduate of Indiana University and Rhema Bible College. John’s work has been featured in Chiron Review, Misfit Magazine and Mojave Heart Review among others. John lives in Elkhart, Indiana with his wife and two cats, Henry and Lucy.