She handed me the fat blue pill and wiggled out of her jeans. She climbed on the bed, rolled to her back: knees at forty-five degrees, legs parted.

I saw for the first time what I assume a gynaecologist sees: the clinical stock of a woman. If Lily stripped naked at any other time I’d be aroused. My eyes would draw the arch of her thigh, her ivory skin, the black bonsai thatch. But I stared instead at female, human, mammal.

She didn’t need to convince me. She just had to ask. But that’s Lily.

I slid the pill inside her, first with my thumb, and then as far as I could reach with my middle finger. I was giving the bird to poor timing and wanton carelessness. She turned her head to the side. I could see the tension flexed in her jaw. No turning back. Like that was even an option.

I couldn’t help but think of Amanda, of ditching school to take a solemn bus ride downtown, of sitting in that waiting room behind the door discretely marked sports clinic. And the vacuum roar. The caged canary behind the desk at odds with the antiseptic smell. My lineage of silenced progeny. A tribute to human extinction: the farce justification that we do this for overpopulation, for the betterment of humanity, when in truth it’s we who come first. We’re not ready. And hers an ill-fated, chemical-stained womb, environment, habitat.

But that’s another bullshit excuse – that we binged for a week and fed on psilocybin. Like, as if, had we been healthy, had the podling a clean start, we would have decided otherwise. At least it makes the decision easier, our consciences lighter.

Lily cringed under my touch, me the laboratory villain. She looked away and pulled her jeans back on, but then, again clothed, she was my girlfriend once more. She tucked her face against my chest and sighed, deep breaths, hands pulling at my kidneys. For a long time we said nothing. We spoke in muscle and sway.

“Thank you for doing that.”

Winter island rain. Our walk-up apartment is ground level. The floor above us overhangs the width of a sidewalk. Our view: parking lot, soccer field, cedar hedges.

We sat outside on the rubber doormat with a blanket wrapped over, under, around. Chain smoking. Shivering at the touch of Old Milwaukee cans. Relief with each sip, liberation. We laughed like it was the first day of summer break.

And we talked about the first kiss. How she hugged me goodbye and thought I guess we’ll just be friends, and he isn’t interested. And how I didn’t let go. How I kissed her like it was nothing, like it was expected.

I told her how crazy she looked the day we met, second-floor hallway, waiting on undergrad philosophy lectures: black hair askew in vaulting dreads, turquoise knitted scarf, wicker bike basket. She said she liked how I never mentioned her accent, never asked where she was from.

Lily clutched her belly. She groaned that it had started, or at least, she ached with the anticipation.

Lily’s strength back in that voice. So I rolled her one.

“Are you angry?” She tapped the joint into an old tuna tin, but there was no ash to knock off.

“I thought maybe you wanted to keep it.”

A few months ago this was fleeting, impermanent.

We sat together in class and compared short-term somethings. I would grad in April, fly to Japan or Italy or Panama. Somewhere. And she was locked down for two more years of academia.

So the first steps were tentative – nothing possible apart from transitory attraction.

Yet we moved quickly. Friends in week one, sex the next, and a fortnight later she got evicted.

I mouthed the requisite poetry:

“You’re pretty awesome. You can move in with me if you like.”

We were drunk again but it didn’t matter.

“Let’s call it a crash course.”

And then: December. We went to her parents’ house in West Van. Pre xmas, drinking triple malt with her dad, eating haggis and fruit cake.

I stayed for a few days, but then it was back to my own roots – I had a flight to Edmonton at dawn. So we stayed up all night. We crunched on midnight snow, blowing smoke in frozen plumes, turning everything over, hacking three-and-a-half months into a courtship narrative.

“I’m not gonna leave in April.” I didn’t know it was true until I said it.

“I can wait, if you’re okay with that. Fuck it. I’ll work, save money for awhile. I’d rather wait. When you’re done school we can travel together.”

She held my hand tighter but didn’t say anything.

We went back to the house and fucked on her childhood mattress, as furious as discretion permitted with her uncle down the hall. I rolled onto my back, panting, and barely heard Lily’s murmur.

“I want to go off birth control.”

“I was thinking… rhythm or whatever.”

My brain bridged our earlier conversation, my decision to stay, with her reappraisal of reproductive goals. I assumed she wanted a baby, even if she wasn’t willing to say so. And somehow I was okay with that. Or at least, I began to process the possibility.

But when the little white stick lit up with a consummate plus sign, she was unexpectedly distraught.

I thought maybe you wanted to keep it.

“No,” I said. “You’re right. It’s not a good time. If anything I’m just surprised. I thought you were hoping to get pregnant.”

“Why the hell would I want a baby right now?”

“It didn’t make sense to me,” I said. “But I thought that was why you wanted to go off birth control.”

“We were doing natural family planning.”

“Lily,” I said. “We had sex every single day for the last two months. You never took your temperature once.”

The rain stopped by morning. We wandered quiet streets under skeletal chestnut trees until we found the ocean. Lily’s eyes were all for the scattered piles of kelp and driftwood, but she didn’t say why.

I stared into the black water, held still by the suck and rattle of waves pulling back across the pebbled shore. We walked, stopped, and walked again. With purpose, but not mine. When we’d reached the stairs at Mile Oh, Lily had three skinny sticks bleached by salt and sun.

Then the rain came down like profanity. Our route home was less meandering but our pace was the same. So when we stood finally upon our threshold, we were numb, purged, and dripping.

We stripped off each other’s clothes and stepped into a scalding shower. Lily climbed out first. I sat in the tub and let the water surge over me. I inched the temperature higher until I could think of nothing but the pounding heat.

When I got out Lily was kneeling on the kitchen floor, naked, wet hair clinging to her back. She had a strand of thick brown wool and three tubes of acrylic paint. In front of her lay the driftwood. She gobbed the paint into her palm and slathered each stick: first red, then blue, then black.

Lily worked like there was a deadline. The colours smeared from one to the next. Paint splattered on the floor. When each stick was coated, she bound them with the wool and set the shiny wet bundle by the window.

She turned and stared at me. Lily looked feral, arms hung like a gunslinger, one strand of hair in her mouth, smudges of paint across her stomach and thighs. She stepped toward me, slowly, pressed her blackened hands to my chest, and pushed me into the bedroom.

“Will you have sex in the blood of your aborted child?”

Stern. It was a command masquerading as request.

I said nothing, but pulled her on top of me. Lily smeared my face black. She clenched my shoulders as if to hold me down. I did not resist.

Love is a socially constructed emotional category. There is no line you cross, no epiphany that lies between mild affection and the inception of adoration. Love and hate occupy linguistic extremes in the continuum of like and dislike, pleasure and pain.

Lily collapsed upon me, chest heaving, coital sweat like embryonic dew. The noise from the street was devoured by the rain, the sky thick with false dusk. The thin pane rattled. I pulled the blankets over both of us. 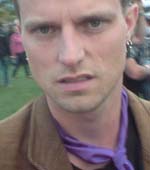 David Griffin Brown is currently freeloading as a housesitter in Panama, where he spends his time taming parrots and doing battle with crazed labradoodles.