2-2:50pm – Panel: Magick and the Occult in the Independent Arts

Our panel of creators and scholars discuss the role of magic, divination, witchcraft and the occult in their work and practices and in zine culture at large. 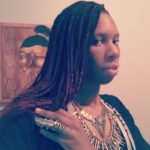 Lynx Sainte Marie is a disabled/chronically ill, non-binary/genderfluid, Afro+Goth Poet of the Jamaican diaspora with ancestral roots indigenous to Africa (West, East and South) and the British Isles. Lynx is the founder of QueerofGender (QofG), a grassroots organization and transnational visibility project, celebrating the various experiences of gender within LGBTTQQ2SIAP+ Black, Indigenous and People of Colour communities. A writer, multimedium artist, activist, educator and community builder, Lynx’s work and art is informed by Black feminism(s), collective community love and social, disability and healing justice movements. Lynx’s latest project, Dreams of Orisha, a zine produced by QofG showcasing the artistic brilliance of Black queer and trans women and Black non-binary people of Canada, will be published early 2016. More can be found at lynxsaintemarie.wordpress.com

Clementine Morrigan is a queer femme sober-addict witch, writer and artist. Their first book, Rupture, was published in 2012. They produced a short film entitled Resurrection in 2013. They are a prolific zinester, currently producing the zines seawitch, make all good things fall apart, Complicating Veganism and Three of Swords. A second book of poetry is currently in the works. More can be found at clementinemorrigan.com

Jenna Danchuk is an Assistant Editor for Spiral Nature, a magazine style website dedicated to alternative spiritualities, practical magick, and exploring occulture. She is also a PhD student in the Gender, Feminist, and Women’s Studies program at York University where she studies the role of cultural production in feminist witchcraft and magical communities. Jenna is a former Associate Editor of WORN Fashion Journal and her writing has also appeared in Shameless Magazine, FUSE, and on Bitch Media’s blog. A training ceremonial magician, but a feminist witch at heart, she has an interest in reconciling the two.

(Psyche) has been an practicing occultist for more than 20 years, and is a member of the z(Cluster), the AutonomatriX, and formerly of the OTO, among other groups. Nico’s work has appeared in a number of magazines, including Trigger 93, Witches & Pagans, and The Cauldron, and Spiral Nature (www.spiralnature.com), where Nico serves as the editor-in-chief.

Amrit Brar is a Toronto-based illustrator and zinester who commonly publishes under the moniker Musterni, and is best known for her work on the Shitty Horoscopes zine series. Her current pet project, Inhuman Connections, explores racism, sexism, gender identity, and queerness alongside aliens, the occult, monstrosities, and ghosts. You can find more info and check out her work at amritbrarillustration.com