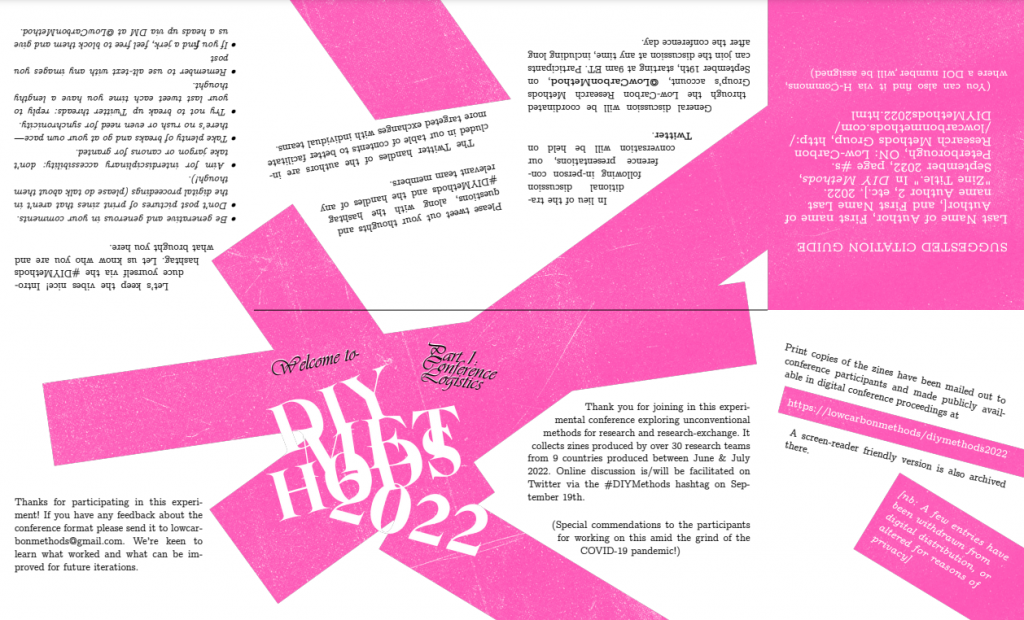 DIY, academia and nature haven’t always coexisted peacefully but Low Carbon Method’s DIY Methods conference is looking to change that. Organizers Anne Pasek, Maya Livia, Devin Short and Sarah Rayner were aiming to create an asynchronous, offline conference that could have a minimal carbon impact by creating research-based zines to be traded amongst participants (attendees can also access PDFs of the zines here).

“I’ve been part of some organizing efforts to push [conferences] online or remote or to have regional hubs,” says Pasek, an assistant professor at Trent University in the department of cultural studies and the school of the environment. “Something that would involve us getting on less airplanes, because airplanes are a pretty significantly bad part of the climate breakdown of academia. It’s bad for the climate and it’s also bad for folks without a lot of money and folks without time and people with border restrictions.”

Pasek has thought about the conference for many years. What would a conference like this look like? Could it be fun? A conference that relies more on snail mail than aeromiles. One that even harkens back to a foregone tradition.

“If you look back in the history of academia there’s the idea of the Republic of Letters,” says Pasek, “quite a lot of exchanges in the old times took place through correspondence because there weren’t large academic journals that would review research and then make it public. It was public through these kinds of personal exchanges that were sometimes distributed beyond the recipient.” 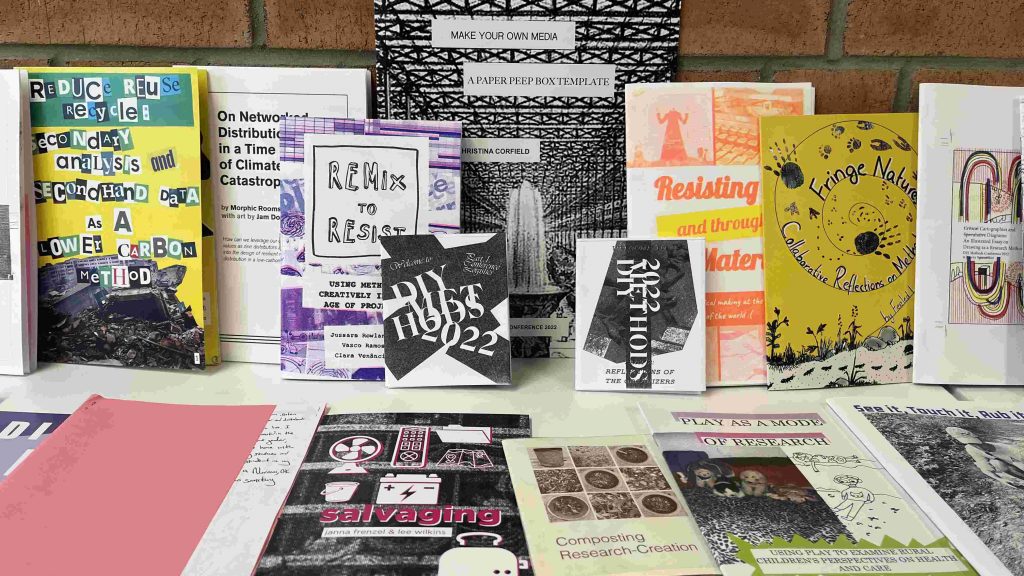 Participants in DIY Methods have developed zines based on their research through most of the year. Having received their copies in August, they are now gearing up for September 19th, when Low Carbon’s Twitter will be hosting online discussions.

“There’s a lot more you can do here than a PowerPoint presentation that you’re giving to a room of 20 very tired people,” says Pasek.

Janna Frenzel, a PhD student in communications studies at Concordia University and participant, had never made a zine before DIY Methods but the interest was there. Her zine, a classic half-pager on ‘Salvaging,’ was made with her collaborator Lee Wilkins. It contains how-to guides for repurposing old appliances and dead batteries. She intends to make more zines, potentially a sequel.

“The call for the DIY methods conference came along at just the right the moment,” says Frenzel, “it made us basically consider a format for the thoughts around salvaging and reusing materials that we’ve been having and explore these two spaces in Montreal that we were interested in more detail with a specific output in mind.”

Pasek found that despite not having a specific theme to the conference beyond academic methods, many of the zines brought up issues of environmentalism.

“It’s a strength of a project that we don’t just have climate anxious people like myself,” says Pasek. “Instead there’s a historian thinking about the erasure of history and public space, zinemaking as a means to kind of create political consciousness. There’s a couple zines on participatory action research, which is a way of working with communities.” Pasek says there have been puzzles, workbooks, reflection sheets and even colouring books in equal measure.

Pasek is sure that this won’t be the only iteration and is excited for the public to see the zines. If things go their way, it won’t be the last DIY Methods conference either. Be sure to check out the zines and follow along with the discussion on September 19th.