SHE POPS A JUICY FRUIT to combat the taste of smoke and the sting of old booze settling into her unbrushed teeth. She chews and the tangy juice of spit threatens to fall from the sides of her mouth as she smiles. The sun has only just started to rise, the sky still blue and purple just like the two little bruises that have formed below her belly button, the imprint of Jake’s knobby hip bones as he got on top last night with his eyes closed.

After a while, the Juicy Fruit loses its flavour so she spits it out onto the curb. She swings her arms as she walks. She wants a cup of coffee.

The coffee shop has a series of paintings on the wall. In the first, a black stallion is being chased by a pick-truck full of cowboys standing up in the back, lassos out. The second is of the same stallion with a harness on its head, rearing up, the rope tied to a fence. Another is of the stallion, running free, with nothing but the wind pushing through the long grass in the background. The fourth is the stallion in a stall, biting at the wooden door. The last is of the stallion on the ground, ropes tied around its legs, binding them together, cowboys all around. She gets her coffee, puts lots of cream and sugar into it.

She knows she is bleeding into the crotch of Jake’s prim prom tuxedo as she walks. Yesterday her mother had done her makeup, put hot curlers into her hair. Her father had put on a nice shirt and bought a hundred dollar bottle of champagne for her and Jake. He looked into Jake’s eyes and smiled as their glasses clinked. Here’s to your special day. Then they all got into Daddy’s car and drove to the hotel.

She knows there is no going back from womanhood now, and for that she is glad. She knows that if she doesn’t make it back home before six a.m. her dad will wake up and find out and he won’t be able to look at her. But she’s not going home. Jake’s tux fits her perfectly. She sips her coffee out on the sidewalk and decides her plans for the day, she’s going to find a pond and dip her feet in it, be hot and cold at the same time.

She finishes her coffee and steps into a pharmacy, goes to the back, buys a package of Plan B.

All the girls had bought their dresses, the boys only rented their tuxedos. Jake’s was a rental, it was due back today, but he is going to have to chase her down if he wants it back. She puts the pills into her backpack and heads toward the park.

Her dress would’ve been blue but Kate’s dress was blue. Then she picked out a white one in the store but her mother said no no no, white is for your wedding day. Her shoes were black and her dress was red, tight.

The class of 2016 sat down for a meal. She sat at a round table beside Jake out of obligation. She watched him, head shaved close to the scalp, and remembered when he’d arrived at her school in grade six. She remembered how he’d gotten a boner in gym class and how he’d told everybody that his brother was in the Christian rock band Switchfoot. He’d run around, jumping off the stumps of the trees in the playground they’d cut down in the summer singing Dare You to Move.

On her other side at the table sat Nicky Malvern. In grade four Nicky didn’t want to be called Nicky any more, he told the teachers and the whole class, he was Nick now, even Nicholas would be better. They started talking over their chicken breast and salad. Turns out Nicky was a rock climber, was going to Yellowstone with his club on a five day climb. He talked about his club, people from all over the city, mostly in their twenties and very cool folks.

Fuck, she thought, as Jake poured half a flask of vodka into his orange soda.

Nicky smiled as he talked about the sunsets on the flank of Mount Washington.

She can only eat half the tube, chucks the rest out. She’s skipping a bit as she walks, is lighter now that her cherry has popped. The black jacket of the suit still smells like him. But she knows her odour is stronger than his, so she starts to run. Sweat pours down her face, her day old makeup runs into her eyes and stings. It tastes bad.

Jake convinced his father to put his credit card down for the hotel room for the after party. When she’d woken up that morning she looked at his little naked butt peeping from under the covers. She took his tux and loafers into the bathroom and put them on, leaving him nothing but her red dress and high heels. She poked her head into the mini bar, saw the mini bottle of champagne he’d told her not to take the night before because his dad wouldn’t pay for it. Now she can hear it slosh back and fourth in her backpack. She arrives at the pond, finds a nice flat rock to sit down on. There are stripes of sweat where the straps of her backpack were resting on her shoulders. She takes the jacket off and dips it into the cool water, puts it back on with a sigh of relief. She rolls the pant legs up and puts her feet in.

Her legs make ripples that travel all through the pond. Nobody else is around. She swishes her legs back and fourth and wiggles her submerged toes. Fuck that hard dick, you like that? he’d said, even though he was the one doing the fucking. You like that? Your pussy is so wet. His voice was muffled, dug into the pillow. His chin rested on her shoulder. She looked up at the ceiling. Earlier that day she had taken all the glow-in-the-dark stars down from the ceiling of her bedroom.  The pussy is soft the sun is hot the dick is hard the water is wet the rocks are hard the air is dry, the sex had not felt good at all.

She digs into her backpack and pulls out the champagne and pops it. The cork skyrockets into the middle of the pond, dunks into the water, bobs up and down. She reads the directions for the pills – two now, two later. She takes the dosage into her palm, raises the bottle and the pills up over her head. She catches sight of her reflection in the water and knows she looks good. Cheers, she says, to the morning after. ∞ 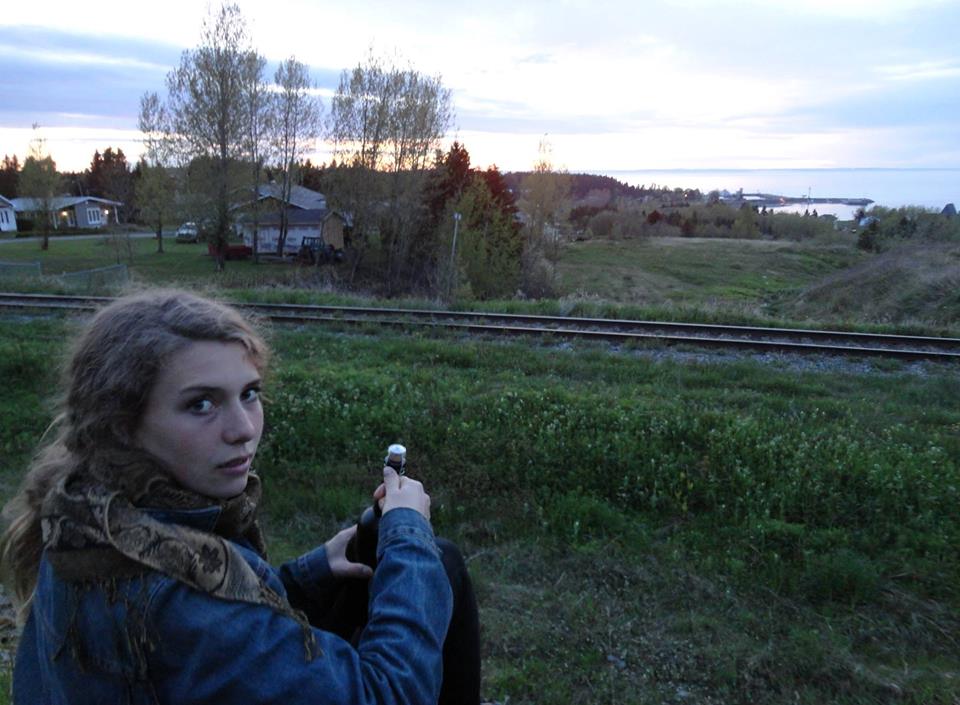 Charlotte Van Ryn is a fiction writer who attended the University of King’s College in Halifax. In 2016 she won the Blodwyn Memorial Prize for short fiction and holds a Letter of Distinction from writer David Adams Richards after a mentorship through the Humber School of Writers. Charlotte’s short story Midol was long listed in Broken Pencil Magazine’s Indie Writer’s Death Match competition in 2018. She is the co-host of a popular reading series, the Listening Party, in Toronto, where she currently lives and works.