I stole my neighbour’s newspaper this morning. He has never noticed my compound eyes or mandibles. I click my jaws behind the hedge dividing our yards while he lathers his black Maserati. White suds on black. Like letters shining through white splashes. Or maybe I have it backward. Bastard.

When I skimmed my loot at 6:46 in the morning, I cut out a picture of MAY, Elizabeth Diane (nee Foster) from the obits. It’s in my back pocket. Her photograph smells like a pistachio shell. The rest of the newspaper is in a box in a drawer in the linen closet of my bathroom. My bathroom does not smell like pistachio, but of cinnamon and stale shit. My neighbour’s: Cherries and lavender. His Maserati wavers under cascades of hose water.

I turn and march toward my sandy hill. “Tony, buddy,” I hear from behind me. “What’s shakin’, bacon?” I have been caught as a liar and a thief. My tongue is plastered to the roof of my mouth, my breath comes in spastic jerks. All my legs have gone rigid. I must turn. I must somehow make myself turn.

“Wayyyynne,” I say, turning with an extravagant flourish of my forelegs. “Loving the new car. What’s the make, eh? Ferrari?”

“Close,” he laughs, grabbing his belly like a fucking cockroach Santa Claus. “Maserati,” he says with a ridiculously overblown Italian accent. He would sound like the Godfather, if the Godfather were bloated and insignificant and scavenging along the floor for cherry pits.

“Hey, buddy,” he says, gesturing me to him with a one antenna and interrupting the hose’s ejaculation with the other. I approach the hedge, extending my thorax over its leaves. “You get your newspaper this morning?”

This is my opportunity to solidify my alibi. If the prick thinks that I get the newspaper daily, he will not suspect me of stealing his. I nod my head. Pull the clipping from my back pocket.

“You’ve got a thirteen-year old sister?”

“Had. Half-sister.” I snatch the monochrome obituary and stuff it back into my jeans.

“So. You see anything, you know, strange this morning?”

“My phone’s ringing inside,” I say. My antennae droop and I stick out my bottom lip. “I really have to go get that. It’s probably my mother, calling about funeral arrangements.”

“Listen, buddy, you take it easy, all right? And hey, Tony, keep an eye out tomorrow morning. You know, for the newspaper thief. Nasty fuckin’ parasite.”

“Yes,” I say as I skitter back into my nest. “Let me know if you net him. I’d like to come over and give him a piece of my mind. Squish him under my heel. Fucking parasite.”

I tunnel into my nest, closing the door behind me, and spill pocketfuls of beer caps onto my bed, rooting through them with my antennae. I taste the alcohol clinging to their underbellies. Hops and barley and a hint of lime on one. At a barbeque, a man once gave me a beer with a pickle slice shoved down the bottleneck. I stole the ties from his living room curtains and slept with his daughter. Her name was Angela.

I pull MAY, Elizabeth Diane (nee Foster) from my back pocket. I wonder how her last name changed if she died at thirteen. Her mother must have remarried, changing her daughter’s surname with her own. I drop the clipping next to the bottlecaps and squat to remove a cherrywood chest from underneath the bed. The lock unclicks, sends my mandibles into a frenzy of snapping echoes. I open the lid and place the newspaper clipping on top of Angela’s panties, next to a jar full of robin’s eggs.

The eggs are sky blue. The urge bites me to reach up and snatch the clouds from the heavens. But my ceiling is in the way. I should stop thinking of the sky the way a priest does.

I met Angela and the dick with the pickle at church one Sunday. Church is an excellent way to collect tithing. The day I met them, the house of God paid me two black buttons, a rosary, and a hymn book that smelled of hand sanitizer and turnip. I like hymn books. I have eleven, each from a different chapel. One of them has an army ant pencilled on hymn 253. Like Ten Thousand Legions Marching. The book tithed to me on the day I met Angela and her father had Angela’s number etched onto hymn 521. I told her I wanted to put her father in a jar of vinegar in my kitchen pantry and serve him with beer. She thought I was a convert to his drinking habits.

I twist the lid off the jar of robin eggs. One ovoid cupped in my forelegs, I scamper into my kitchen, place it on the counter, root in the cupboard above the stove for an empty mason jar. I fill it halfway with vinegar and drop the egg in. It sinks to the bottom and stands on its point. I poke the glass. The egg rolls inside like a beetle eye. The vinegar swirls. Cradling the jar to my underbelly, I return to my front door and peer out the frosted window. It is divided into diamonds. My compound eyes combine with quadrilateral geometries, so through the glass I see millions of broken, blurred trees. I open my door and step outside again, glaring up at the sky. I want to pickle a cloud. Wayne stares at me from over the hood of his gleaming Maserati. Supercilious cockroach.

The phone rings inside. I burrow back into my hole, find the handset underneath white couch pillows that smell like semen and smoked salmon.

“My dad’s out of town for the night. Want to come over?”

I pick a pistachio shell from the bottom of my bare feet. “Why don’t you come over here?”

“Lost my key,” she says. She sounds like an angel of the host. I want to latch onto her and leech her blood between my teeth. “I wouldn’t be able to get back in tomorrow.”

I click my tongue. “You’re the queen ant. Be at your hill in an hour.”

She giggles. “You’re so weird. Bring some of the good shit. And just walk in. I’ll be in my dad’s bed, waiting.” She hangs up without saying goodbye.

I toss the phone back onto the couch. It rolls off the cushion, clatters underneath the dark maple coffee table. I bring the pickling robin’s egg into the kitchen, set the jar on the counter next to the toaster. A colony of ants parses out pieces of yesterday’s pumpernickel, carrying the bread back through some unknown hole in the wall. I smell them: rye flour and cocoa.

My mother used to bake a different loaf of bread every other day. My brother and I would slice strips into the toaster (no ants beside this one, gathering discarded chunks and crumbs of cinnamon-raisin or poppy seed). Warm and buttered, the bread would enter into our gaping maws. Mom would watch. Wait for our approving nods and moans. Everything smelled like bread. Our clothes, our shoelaces, pillows, seats in the station wagon.

I replace the station-wagon yeast and oats with a mint tree hanging from my ‘Cuda’s rearview mirror. I stole the mint tree from a truck stop souvenir shop, along with a pack of sour candies and a Canada Kicks Ass keychain. I gave the sour candies to a crying baby in a blue stroller by the machine that claws stuffed animals. The keychain is in the cherrywood chest underneath my bed.

I stop at the liquor store and pick up a bottle of Tequila Rose. I put it on the counter, add a bottle of lemon vodka. I pay the red-haired wasp forty-seven dollars and fifty cents. She gives me back a dime and nickel. She takes off her ring and puts it on the counter, replaces it with a glob of hand sanitizer. I tell her she has a mosquito on her arm. When she moves to swat it I slip the ring from the counter, tell her it flew up around her head. I wriggle out the door, continue on my way to Angela’s.

She waits on her father’s bed. “Where is it?”

I raise the bottles. Her brown compound eyes reflect the sun the same way the alcohol does. I hand her the bottle of tequila and she pours it down her throat. I wonder if she sees me in thousands of inverted images or in a single erect one.

“Does your dad,” I say, looking at the crucifix on the wall, “want to make love to Jesus?”

“My dad’d fuck anything if there’s bondage involved,” she says. She cups my testicles in one hand, grips the Tequila Rose in the other. I push her down onto the bed. She buzzes like a cicada. Devours me-alitrunk, petiole and gaster-while we skitter along the bed. She slithers her feelers along my own. Locks her mandibles around my neck. We are under a magnifying glass.

I leave her in a sweaty web. “I got you something.”

“Something else?” She drains the tequila.

I pull on my jeans, take the cashier’s ring out of my pocket. White gold, diamonds around the band. I extend it in a foreleg. Angela leans forward, touches it with her feelers. “This,” I say.

“Are you kidding me?”

I sniff, scratch an antenna.

“I mean, are you fucking kidding me? What the fuck is this?” She pushes me.

“It was just something I had.” I put the ring back in my pocket. “I thought you’d like it.”

“Like it?” She pounds a tarsal claw against my chest. Again. Smacks me. I smack her back.

“Get out of my house. Or I’m calling the cops.” But instead of pushing me out the door she pulls me back onto the bed. Begins to wrap me in all six legs. Later, before falling asleep, she tells me that her boyfriend has been accepted to the University of Toronto for graduate biology. “He’ll be studying the social patterns of ants,” she tells me. “Fucking weirdo.”

I stare at her desk. A math textbook and The Merchant of Venice sit on a neat pile of paper. She crawls out of bed behind me, begins shuffling through her clothes.

I turn around. She’s still naked. Holding my jeans. In the other hand, the newspaper clipping of MAY, Elizabeth Diane (nee Foster). I say, “I found that.”

She raises her eyebrows.

“You don’t have a sister, Tony.” She drops my pants and the clipping, runs to the bathroom, retching. I take the white-and-pink rosary off her dad’s bedside table. It smells of halved peaches and sugar trails. 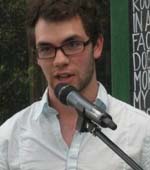 Braydon Beaulieu makes his home in a pistachio shell. When not studying for his MA in Creative Writing at the University of Windsor, he’s most likely stealing your toothbrush and pickling your mittens. His work has appeared in Generation, PicFic, Escarp, and echolocation. Follow his escapades.