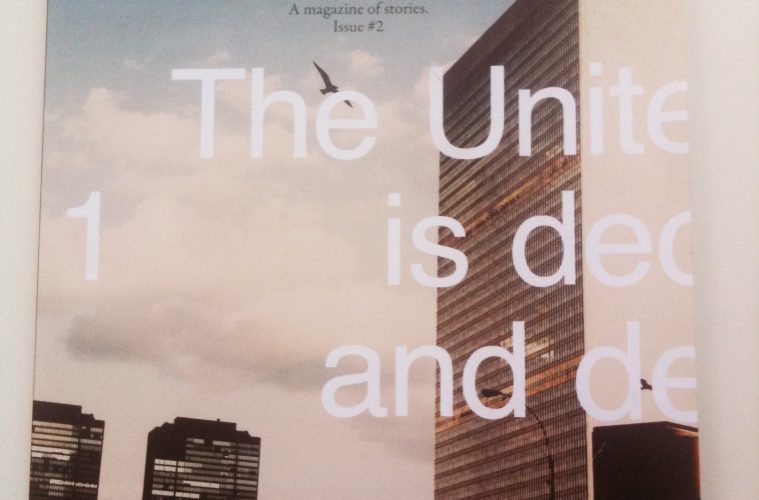 To round up my chronicles of cool places  in Berlin, I give you  two very cool publications picked up at the city’s English-language bookstore Dialogue Books. Both pubs are originally produced in the U.K., although the Dialogue bookseller told me that Teller was brought in by one of the mag’s staff who lived in the neighbourhood. The bookseller was so impressed with it,  he bought a stack of ’em off on the spot. You can see why below.

Teller starts off with a photo essay blended with a gonzo style story about a journalist snorting coke and stumbling his way through the United Nations. At first, the frame-by-frame tracking of this journalist”s rampage through the UN struck me as cheesy. And then genius. How often does that progression happen? The rest of the publication is similarly well-produced, blending experimental stories about barfing out drugs and investigative pieces about Bucharest’s dog infestation and the growing field of pharming, genetically engineering plants to produce drugs.

Slightly more established than Teller, Fire & Knives – a print quarterly of new writing on food – is in its seventh issue. And never have I read such a delicious sampling of foodie writing. The pub approaches nosh from all angles: there’s an ode to the Scotch Egg (strangely I found my mouth watering for that repellent breaded egg), a barista’s perspective on coffee customers and a travelogue about working on Italian organic farms. Fire & Knives is also lovingly produced, with each essay paired with illustrations and laid out on its own candy-coloured page.

You can find more links to the rest of the Berlin Chronicles stories here:

“Over its 26-year history documenting social movements in Germany and beyond, Papiertiger has crammed its interiors with 2,300 binders of pamphlets, newspaper clippings and leaflets.” – Papiertiger Archiv & Bibliothek