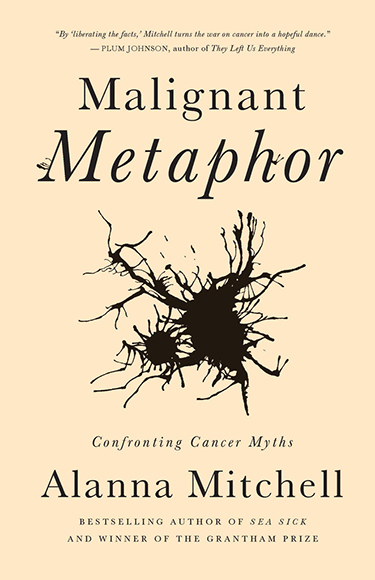 Analogy is a human impulse. The mind seeks logical connections between discrete phenomena. Once an explanation has been internalized, it can be devilishly difficult to dislodge, even when confronted with new evidence — especially when that evidence runs contrary to one’s deeply- held preconceptions. Our tendency to use figurative language as shorthand can likewise mislead us when the characteristics of two unlike things become conflated by an inexact metaphor. As Alanna Mitchell argues in Malignant Metaphor, the familiar comparison of cancer to battle has fundamentally warped our ability to normalize the illness.

Despite its title, Mitchell’s book isn’t much concerned with the technical aspects of language, being instead a sort of hybrid popular science memoir. An award-winning science writer, Mitchell weaves a technical and historical account of cancer treatment (not unlike Siddhartha Mukherjee’s The Emperor of All Maladies: A Biography of Cancer) with a personal account of her brother-in-law John’s dogged pursuit of treatment after being diagnosed with melanoma.

Mitchell’s gift as a writer is in her ability to synthesize dauntingly complex science into readable prose; there’s a thrilling horror in her vivid depiction of metastasis, and her exploration of the means by which technicians scour the bloodstream for a single cancer cell. Her delicate descriptions almost conjure that Philip Glass-like music used by documentarians to make your neck hair stand on end with wonder.

Mitchell points out that, much like the misperception that the victims of Nazi death camps were to blame for failing to resist their captors, a cancer diagnosis is often regarded as a reflection on the patient’s lifestyle choices. In actuality, the vast majority of cancers are the product of genetic bad luck. The metaphor of cancer as war (“I’m gonna beat this thing!”) is a fantasy of control, because the “fight” is largely won or lost before it’s formally begun; even John, rich enough to sink a fortune into alternative treatments, cannot decisively prove if they’ve had any effect.

Mitchell’s conclusion that substituting dance as a metaphor instead of war seems doomed to fall on deaf ears, but this little book does the momentous job of loosening a deeply-rooted fallacy, and for that it deserves great credit. (JM Francheteau)