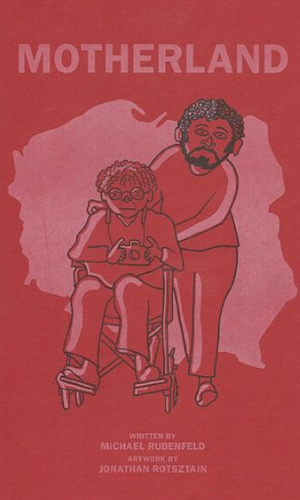 In their 20-page comic, writer Michael Rubenfeld and illustrator Jonathan Rotsztain explore the legacy of trauma and tragedy felt by families generations after the Holocaust. Motherland is not a period piece, but rather a contemporary story focused on the modern- day struggles of Polish Jews whose ancestors suffered the violence and horror of Hitler’s Poland.

The comic zine is a true, first-hand account of the writer inviting his mother on a trip to Poland in an effort to work through their unresolved historical trauma. He takes his mother to her hometown, to Auschwitz, and to a Polish-Jewish synagogue to reclaim their roots, where, to their surprise, they find a thriving Jewish community. Rubenfeld meets a local Polish Jewish woman, who brings him and his mother a newfound knowledge of their people’s history, as well as their present in the Jewish communities in Poland. This allows he and his mother to work through their traumatic pasts and move forward with new pride and respect for their complex heritage.

Through simple line drawings and compelling shades of blue, Jonathan Rotsztain illustrates a story both personal and culturally potent. He and Rubenfeld identify challenges faced by modern Polish Jews in reclaiming and understanding their complex identity. Much of the story touches on that intangible, violent past in ways that demonstrate its immateriality to those not present for it. For instance, the comic begins with a family viewing of Schindler’s List, which triggers his grandparents’ traumatic memories of the Holocaust, the stories Rubenfeld “grew up hearing about Poland.” (1) The brief comic is meant to preview a full-length graphic novel about the lingering effect of those stories. I hope for a deeper and more thorough exploration of these lasting traumas, Polish-Jewish identity, and inter-generational conflict in a future edition. (Nicole Partyka)