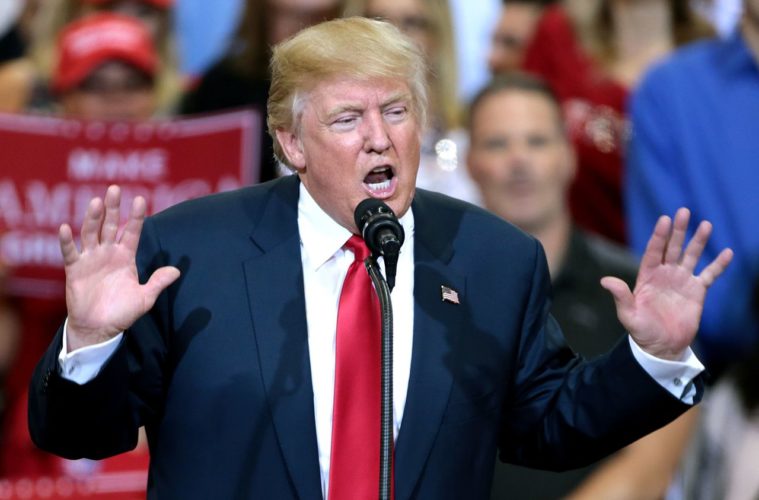 For the past 17 years, I’ve worked at Quimby’s Bookstore here in Chicago, which sells zines, mini-comics, and books. We’ve always been a place friendly to independent publishers, with a pretty open consignment agreement (download our agreement at quimbys.com and send us your zines!), so we never know what’s going to arrive in the mail. Thus, the store tends to reflect whatever trends are happening in indie publishing. In this time of unrest, many of the zines we receive express horror, anxiety, and anger about our current political situation and, yes, the American Commander-in-Chief Donald Trump. Here I’ve rounded up 10 zines doing just that — talking back to Trump and calling everybody to action. 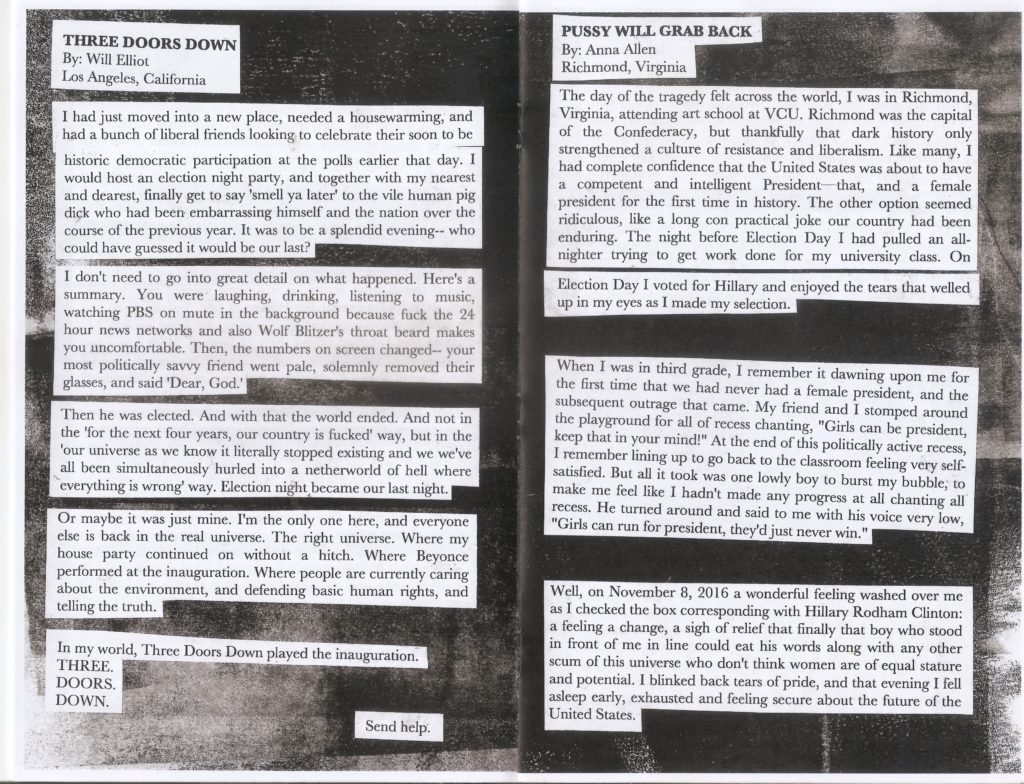 November 9: Where Were You?

This zine asks people to detail what they were doing the night Trump was elected and collects their responses. I can tell you where I was: I was glued to my TV set in disbelief, thinking that we were in some alternate reality. It’s preposterous, of course. I actually found it more believable that the laws of physics would alter my position in the universe such that I would be in a totally different reality, before I would believe that Donald Trump would be our 45th president. Upon opening this zine, I saw I wasn’t the only one that believed the alternate reality hypothesis. 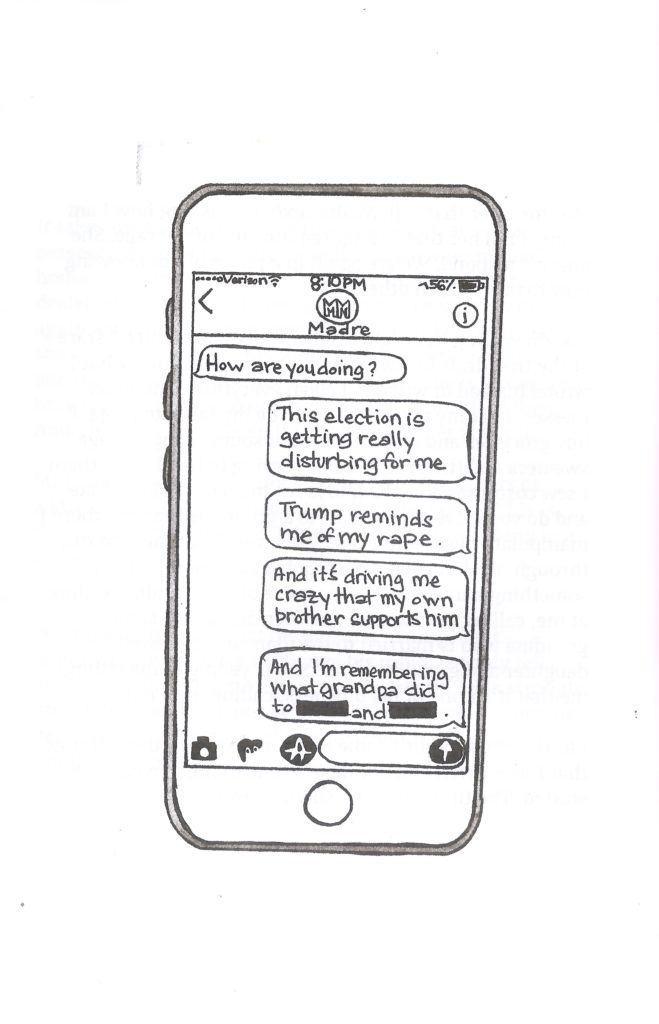 Trump Reminds Me of My Rape

In chronological order, Moore writes about haunting moments of sexual assault and the related fallout. These episodes are accompa- nied by illustrations by K.V. Natan of the things that provided solace in the moment, like salt and pepper shakers on the table during a heated family discussion about a sexually abusive grandparent. Each vignette reads like a verse, and by the time Trump shows up at the end, with his pussy grabbing rape allega- tions, Moore has set up a thoughtful case for why the personal is not only political but also powerfully poetic. All proceeds of this zine go to Planned Parenthood. 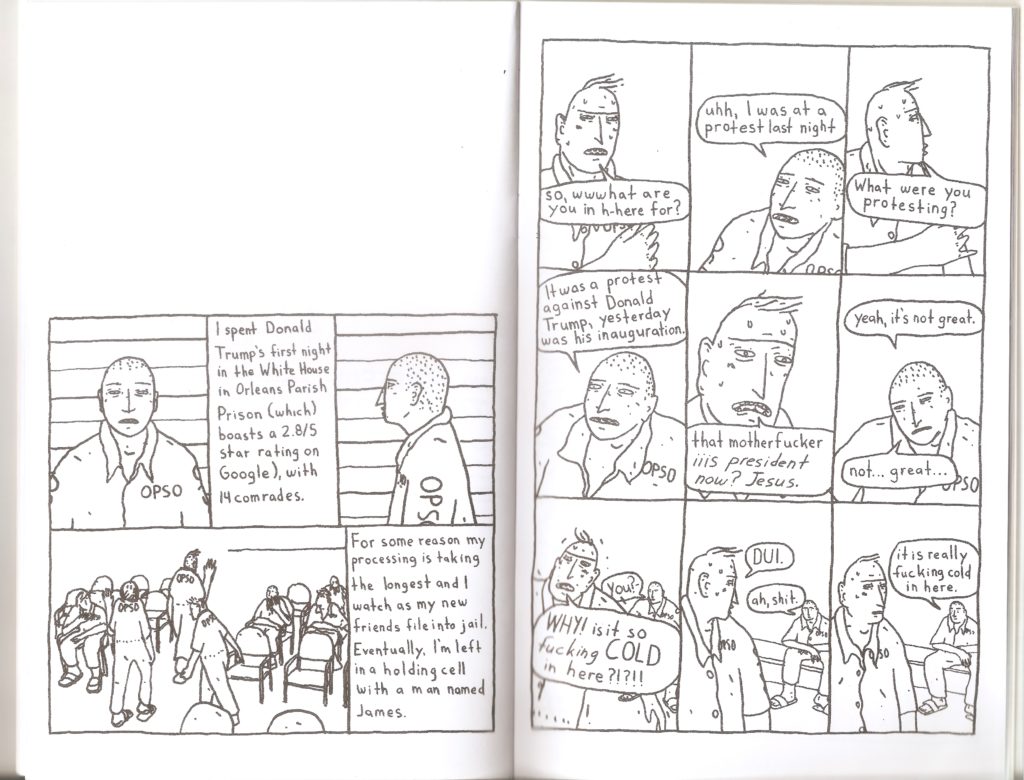 This elegantly drawn mini-comic is part one of the story of a year of antiracist and anarchist struggle in New Orleans after the 2016 election. Although the artist says it’s fiction, it’s clearly written by someone engaged in a life devoted to protes, such as marches (and what happens when organizing assemblies turn ecstatic energy to bureaucracy over time), filling downtime during unemployment by hanging radical posters, and even doing a stint in jail. This is what you have to look forward to protesting The Man in the the Big Easy. Spoiler: it’s not so easy. 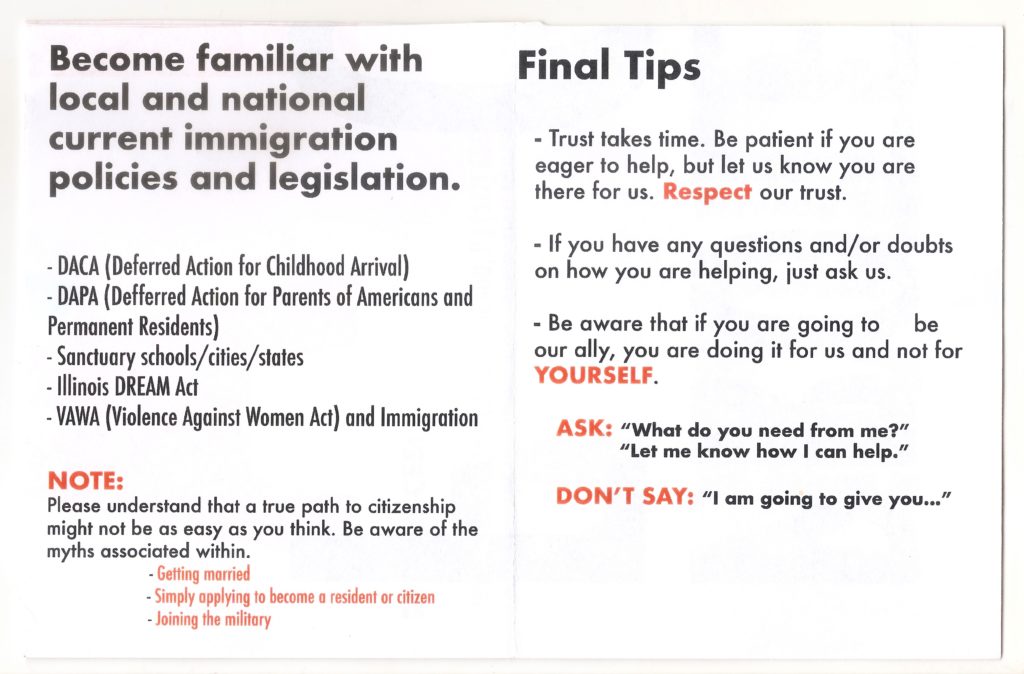 UNDOCU-ALLY: A Guide on How to Be a Good Ally For Undocumented Immigrants

In spite of the current US administration’s attempts at building walls (both physical and metaphorical), this zine seeks to help folks create protection for all within the U.S. If you’re in a position to help, this is the zine for you. It gives tips on helpful things to do and say/not say, wording to use when talking to folks with whom you wish to help, how to become familiar with US immigration policies and legislation, and notes on common myths about the path to citizenship. And, frankly, a lot of the etiquette stuff is actually helpful no matter what country you’re in. 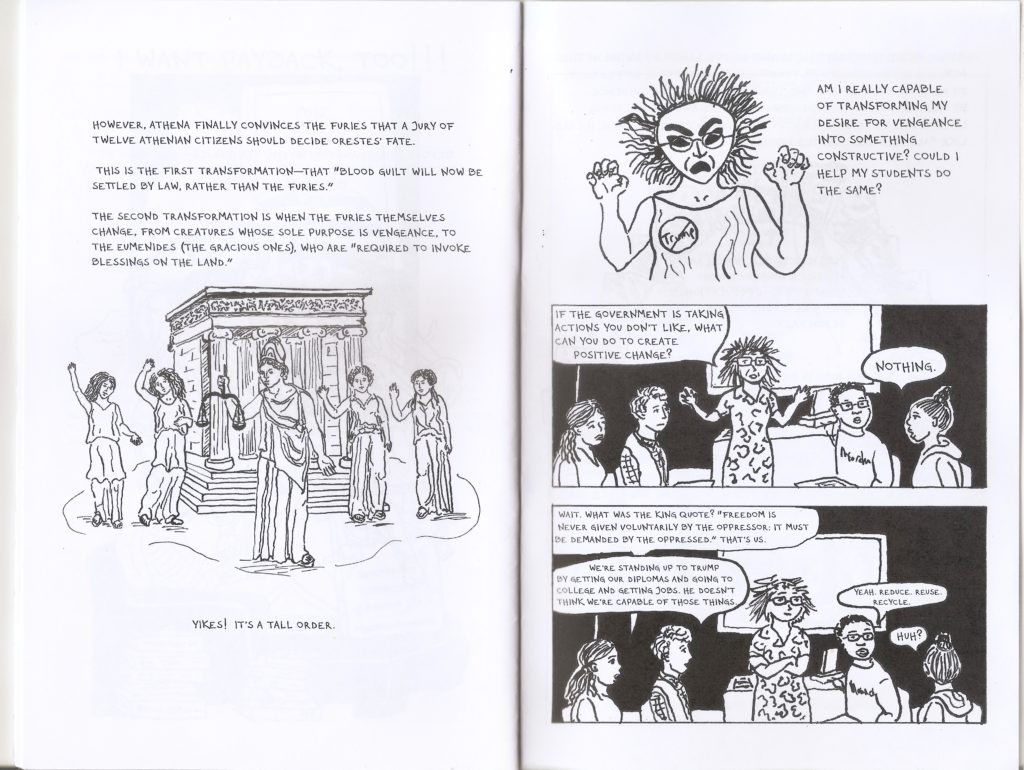 “Since Trump’s election, expressing hate and ignorance seems to have become acceptable,” writes Lisa Wilde in this mini-comic about attempting to survive the Trump presidency. She’s an English teacher at a second chance public high school in Lower Manhattan. After the 2016 election, she was faced with the challenge of easing her students’ anxieties abouty very real racial tensions. It’s already frustrating getting through this presidency. But being a teacher for a low-income demographic that is facing discrimination and even deportation adds another level of stress. It’s admirable to see the artist attempt to turn anger and vengefulness into something constructive: a truly teachable moment.

Yo, Miss #6 was a finalist in Broken Pencil’s Zine Awards. 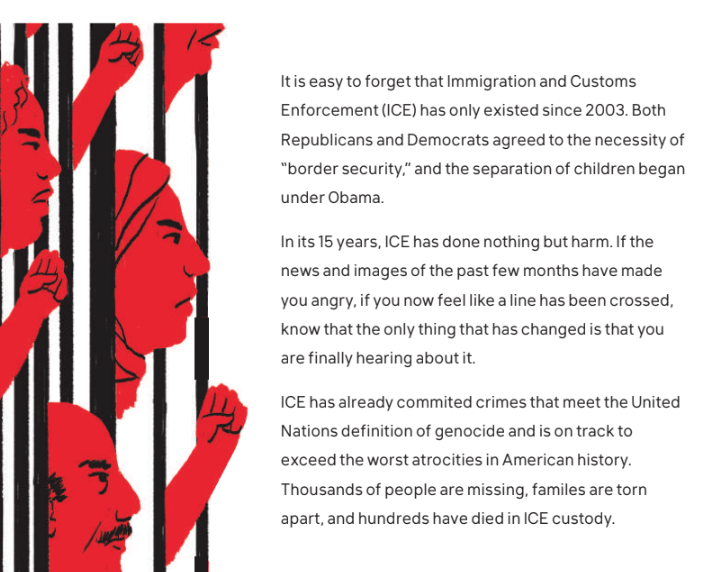 BY // The Democratic Socialists of America

The Democratic Socialists of America want to remind you that even though the Immigration and Customs Enforcement (ICE) has only been around for about 15 years, it’s done a world of harm and should be abolished. You can print out this zine, then assemble it with some cuts and folds, then give it away. Make as many copies as you want. Spread the word about the realities of for-profit prisons that detain those arrested by ICE, the evils of capitalism, and the racist weaponization of our legal system against entire groups of people. Now in a handy-dandy palm-sized format! 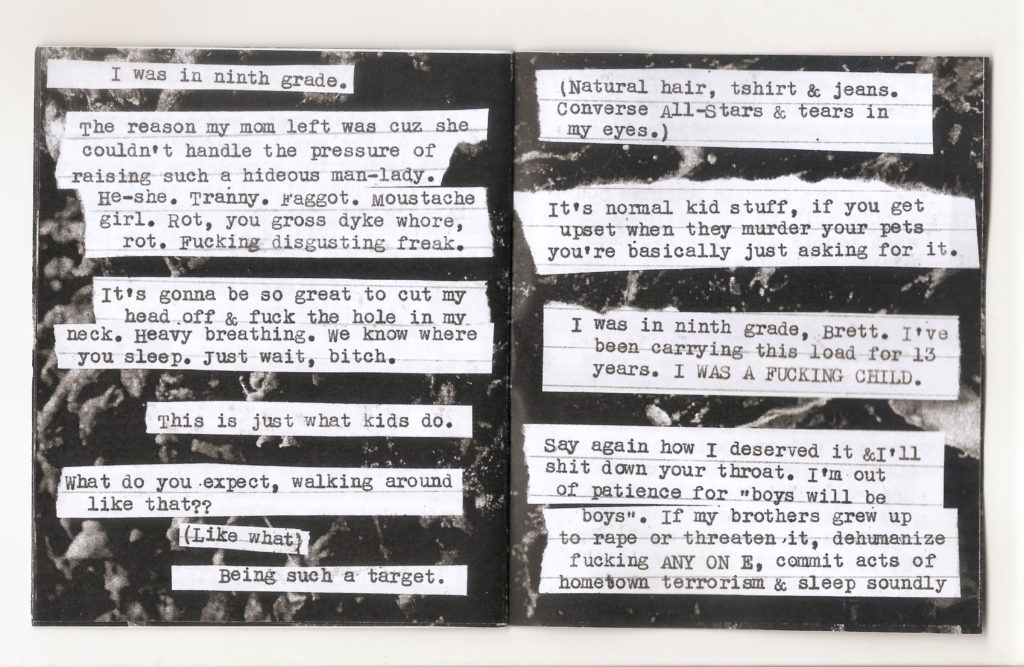 No Salvation // No Forgiveness

This elaborate fantasy about trapping Brett Kavanaugh in an elevator and screaming at him is just my style of righteous anger (the best kind). Provoked by the deluge of toxic masculinity in the controversy surrounding the Department of Justice (and the entire White House), Julia Eff rants about their personal experience with the repercus- sions of sexual abuse, harass- ment due to gender non-con- formity, and other raw and relevant tragedies, all of which seem exactly the types of things one would want to relay in an elevator to the Supreme Court Injustice. 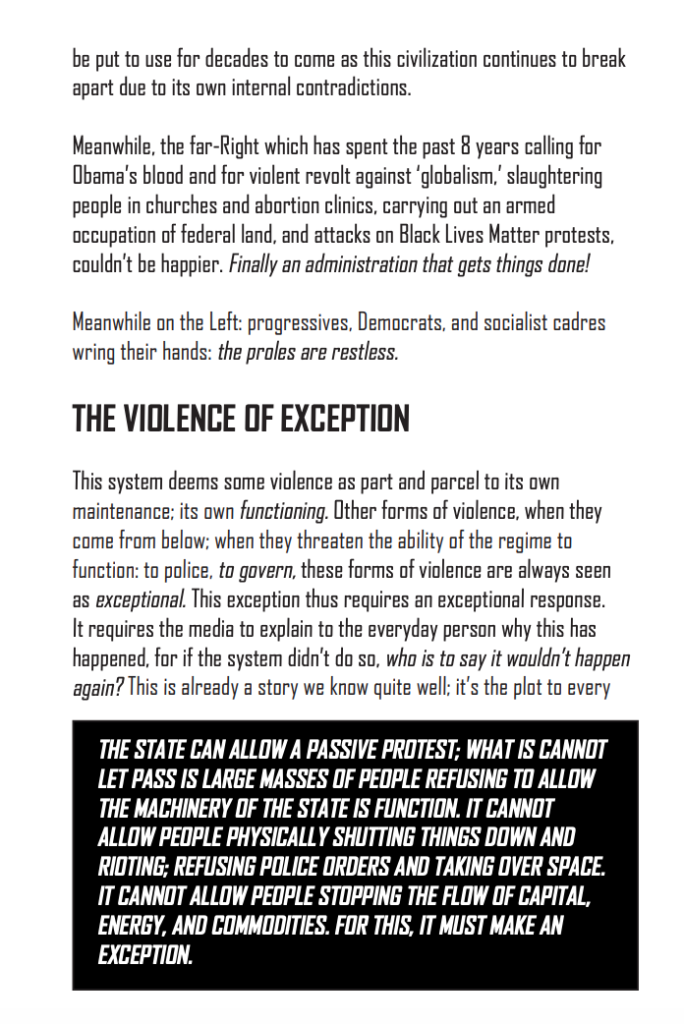 An Anarchist Primer: For the Days of Trump & the “New Normal”

Sometimes voting is not enough. But how to do more than that can be difficult to figure out. This zine reminds us that we have to be in a constant state of defence: defence against the mainstream press, defence against the not-liberal-enough liberals (who will sell real radicals and anarchists out for power), defense against the alt-right, defence against a government who will slap you with legal punishment — or worse — if you’re a radical or an activist. And what’s more, it’s essential — and challenging — to fight injustice and violence without involving the police or the state. You have to be organized, build community, and develop skills. This zine is your chance to get started with some helpful hints. 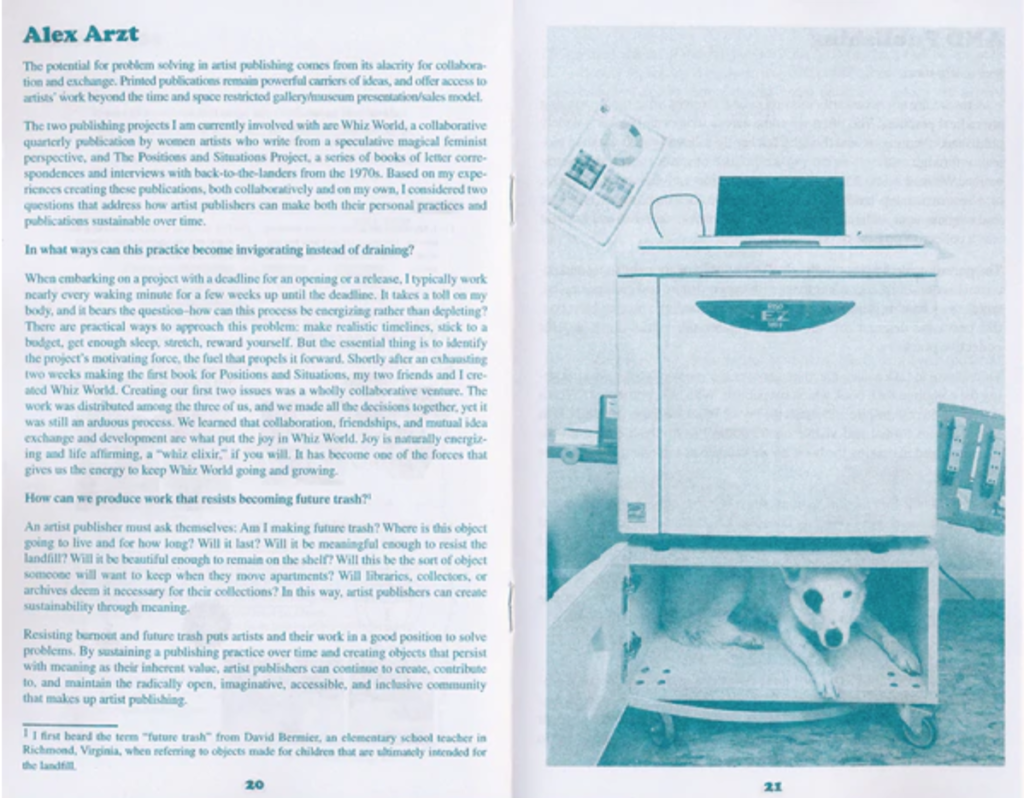 What Problems Can Artist Publishers Solve?

In this zine, 17 independent artists respond to the question: What social, political, economic and ecological problems are artist publishers equipped to address or solve? All sorts of answers come up: Zines fight the mainstream narrative and promote otherwise overlooked voices. DIY culture models learning new skills instead of relying on corporations (thereby increasing community solidarity). The best art cuts down on pollution by making stuff that doesn’t end up in landfills. And so on! This is definitely a defence of zines’ unique ability to fight the wave of depression and anxiety that seems to be washing over, well, everything. As someone who runs a bookstore that sells these type of periodicals, and who makes zines myself, I’ll add: soul enrichment is a basic need the same way food, clothing and shelter are. Without keeping our brains active, engaged, and even entertained, we leave our stories and our knowledge in the hands of powers that don’t care about us. And we can’t have that! 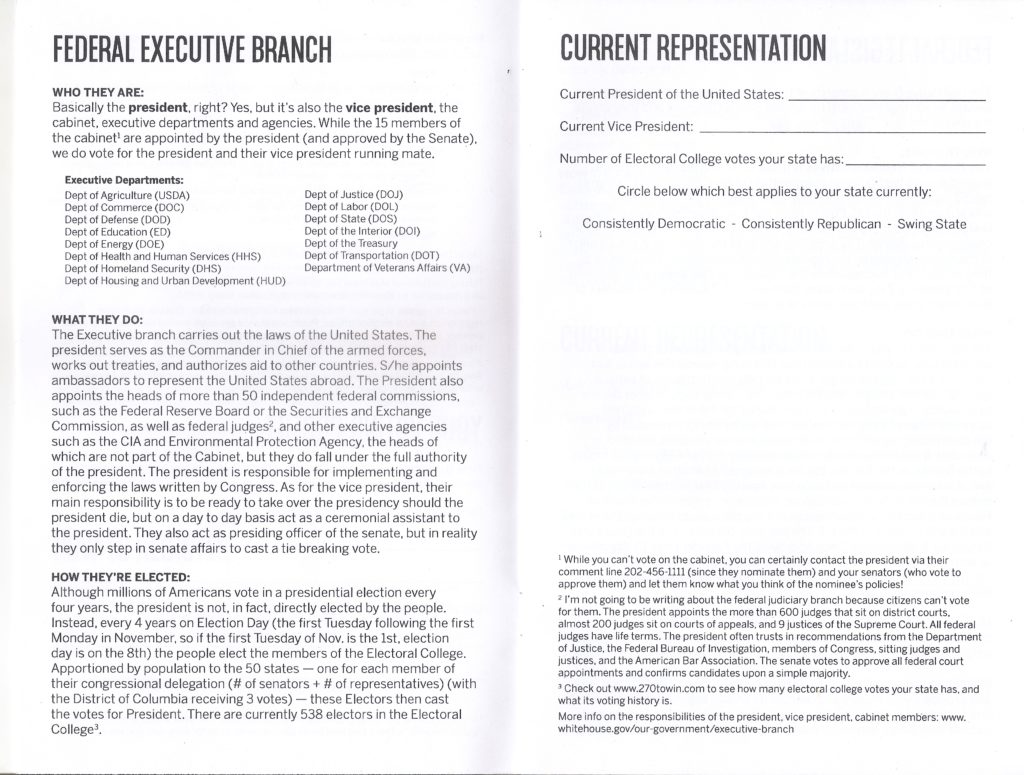 Know Your Vote: A Workbook to Get to Know Your Elected Officials (Biff Boff Sock #9)

We should always raise our voices when we see injustice, there’s no doubt about that. But we should also make sure we’re well informed about our long-term civic duties, such as voting. It’s equally important to make sure we’re voting the unjust out of office! This zine walks you through registeringto vote, tells you about the levels of government, who does what in each branch, the different types of elections, and more. 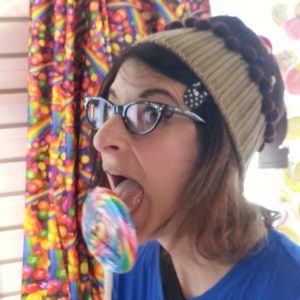 Liz Mason has been self-publishing for 20 years. Recent published works include Caboose #10 and Awesome Things #2. Her work has also been printed in such publications as Punk Planet and The Zine Yearbook. She appeared on the reality show Starting Over to provide instruction on publishing zines, which NBC executives referred to as “pamphlets,” as if they were Marxist propaganda. Her 1987 membership number from SHADES, The Official Corey Hart Fan Club, was #13881.