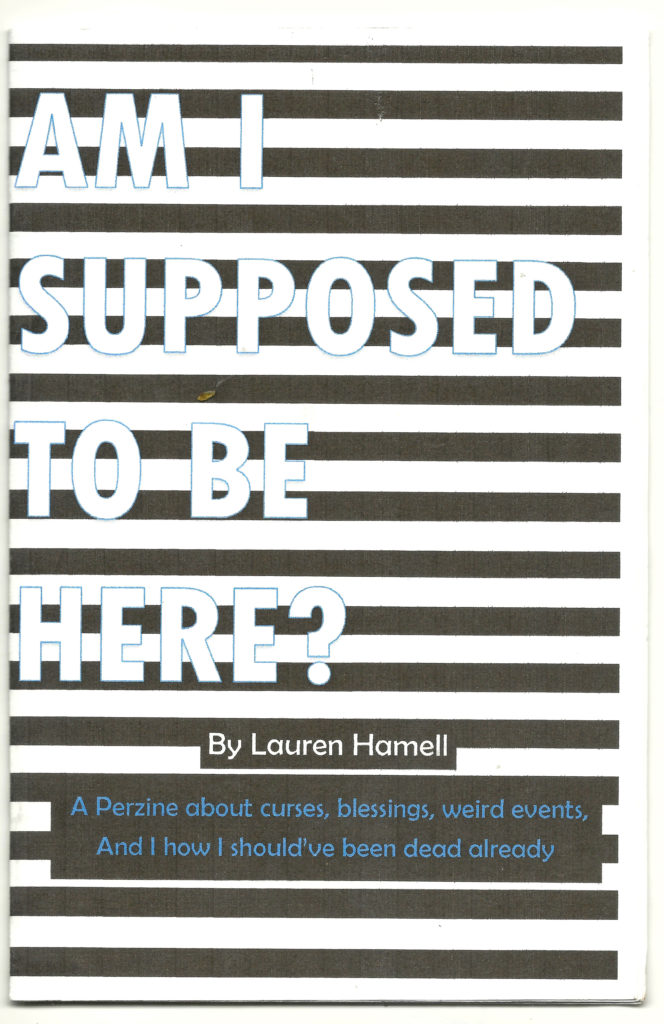 Am I Supposed to Be Here?

In this reflective memoir, zinester Lauren Hamell contemplates the meeting points of religious openness, mental health and identity. Using anecdotes from childhood and a lists of almost supernatural experiences, she describes how her depression and queerness have influenced her questioning of the Christian religion that she was raised in. She remains open to the possibility of there being something “out there,” but rejects most of what she was taught to believe.

Hamell’s openness seems to stem, at least in part, from various collections of unexplainable or paranormal experiences listed throughout the zine. There are lists of “cursed things I’ve done [or] that have happened to me” and “blessed moments I have experienced.” Outside of these lists, she talks about her broadening conception of God and ideas of heaven and hell. It’s all a bit more meandering than the zine’s title suggests. Lauren fleetingly mentions suicide in one of her lists, but doesn’t address the provocative existential question of her title until the very end. However, the zine is clearly a venue for Hamell to do some spiritual processing, and this will surely resonate with some readers.

Hamell’s meandering style may be the very reason the reflections make for a surprisingly digestible read. Despite taking on deep topics, she’s content to scratch at her own memories rather than delve into overly complex analysis. In all, she ends up where she begins, accepting ambiguity and a lack of clear answers to her spiritual questions. Some may find the result dissatisfying, but those with some sympathy towards uncertainty in spiritual matters will be glad to read the thoughts of a fellow traveler. (Joshua Barton)